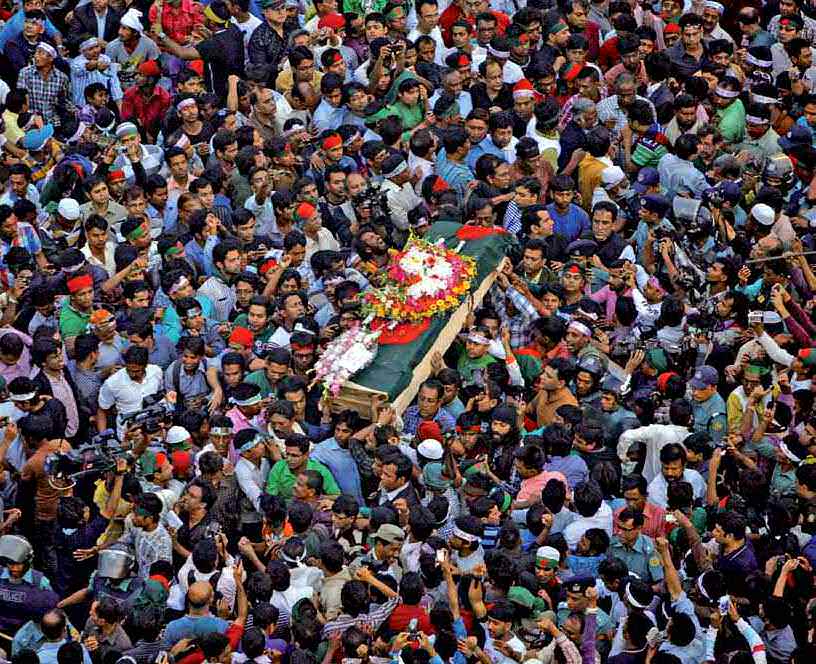 The news from Bangladesh should alert India to the threat from ISIS. It is real and immediate.

Operatives Of the Islamic State of Iraq and Syria (ISIS) are gaining ground on three  flanks of India. On the eastern side, its activities are mainly in Bangladesh and Assam. It also has influence in more than a dozen states within the country. On the west, Pakistan, as expected, is sheltering the dreaded outfit.

In particular, Bangladesh is seeing jihadist trouble increase. This year alone, four secular bloggers, both Hindu and Muslim, were killed: Niloy Chatterjee on 6 August in Dhaka, Ananta Bijoy Das on 12 May in Sylhet, Washiqur Rahman Babu in Dhaka on 30 March, and Avijit Roy in Dhaka on 26 February. Their killings have been claimed by Ansarullah Bangla Team (ATB). The first high-profile killing was of Ahmed Rajib Haider on 15 February 2013 in Dhaka. It seems it was carried out by an offshoot of the Jamaat-e-Islami Bangladesh, which later evolved into ATB after establishing a relationship with Al-Qaeda. At least one terror training camp of Bangladeshi nationals in Afghanistan was noticed in the recent past. There were attempts on the lives of other bloggers. While blogs written by Ahmed Rajib Haider and other secular bloggers led to the Shahbag protests in February 2013 demanding capital punishment for the Jamaat-e-Islami leaders convicted of war crimes in the 1971 war, counterprotests were led by Jamaat-e-Islami Bangladesh and other Islamist groups such as Hefajat-e-Islam (‘Protection of Islam’), leading to nearly 50 deaths in May 2013. Islamists groups can organise quickly. Hefajat-e-Islam, a coalition of a dozen Islamist groups supported by 25,000 madrassas in Bangladesh, did not exist before 2010. Its rise, the conviction of Jamaat-e-Islami leaders for war crimes and Al-Qaeda’s designs on the region came after that.

The ISIS has also begun targeting foreign nationals in Bangladesh. This is a distinct shift from their previous target-killing of bloggers. On 28 September, ISIS issued a statement claiming responsibility for killing Italian national Cesare Tavella in Dhaka. Translated from Arabic by the Jihad and Terrorism Threat Monitor of the Middle East Media Research Institute, it warned that people from ‘the Crusaders’ alliance’ would not be safe in Muslim countries. Tavella was working in Bangladesh for the Netherlands-based NGO called ICCO Cooperation. His murder is ISIS’s first terror attack in Bangladesh. On 3 October, ISIS released another statement in Arabic claiming responsibility for killing Kunio Hoshi, a Japanese national at Mahiganj in Rangpur district, 300 km from Dhaka.

These statements were issued via Twitter within hours of the killings. Both Al-Qaeda and ISIS have stepped up operations in Bangladesh. Sometime around 2009, Al-Qaeda’s central leadership had begun appointing Pakistani nationals to its top organisational posts in Pakistan. Ustad Ahmad Farooq, killed since by a US drone strike, was the first Pakistani to be appointed to a senior position in Al Qaeda as head of its media and preaching department for Pakistan.

In a statement dated 30 September 2013, Ustad Farooq mentioned the issue of Muslim minorities in Thailand, Myanmar, India and Sri Lanka, and urged Islamic clerics in Bangladesh ‘to step forward and help the oppressed Muslims in your neighbourhood’. Outlining AlQaeda’s look-east policy, he also stated: ‘I warn the Indian government that after Kashmir, Gujarat… you may add Assam to the long list of your evil deeds.’ While Al Qaeda had once failed to get a toehold in India, it is beginning to attract Assamese youths. This should not surprise us, because Assam and nearby Myanmar have witnessed atrocities against Muslims.