Grand Opening Of Dance Bars, Are The Girls Excited? 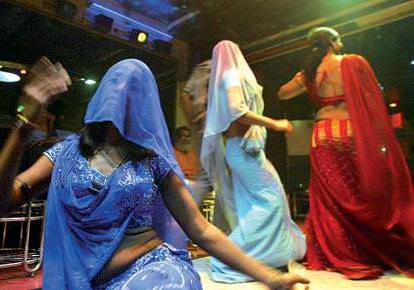 Following a Supreme Court order, Mumbais dance bars are preparing for a grand opening. Are the girls equally excited?

Fatima, 45 years old, is seated on a mattress laid out on a floor with a garishly printed carpet. Three plastic chairs are strewn around. To the far left of the mattress is an earthen pot filled with water. There’s a steel glass floating near the top. The small rented room is located in Malvani, a northern suburb of Mumbai. There are three young girls seated near Fatima. They all seem to be around 15 years of age and their faces are caked with make-up.

“Arre tu bahut hi kauli hai. Thoda body bana le phir dekhenge (You are too young. Let your body fill in and then you come back),” says Fatima, dismissing the first girl. The other two meet her standards. They will work as dancers at a well-known dance bar in Borivali East in suburban Mumbai. Each of the girls will give Fatima, a recruiter for dance bars in the city, a one-time payment of Rs 2,000. Demand for her recruitment services has shot up with the Supreme Court order of 26 November, which dismissed an appeal by the Maharashtra government to ban dance bars in the city. In 2005, the then state government had closed down dance bars calling it an ‘evil influence’ that broke up families. About 2,500 bars, including 350 licensed ones, had to shut shop and 150,000 dancers were rendered jobless. The Supreme Court has now directed the state government to issue licences to dance bars within two weeks from the date of its order. The dance bars will be back because the state’s legal team failed to explain to the Court bench why dance performances in high-end bars or hotels were allowed while those in cheaper bars and hotels were slammed as derogatory, exploitative and corrupting of public morality.

Before the ban, Fatima, who had migrated to the city from Morena in Madhya Pradesh, danced at a bar in Borivali East. Fair, with deep-set black eyes, she can’t dance anymore now because age has caught up with her. “I used to earn about Rs 1 lakh a month. I had a lavish lifestyle for the six years I worked in the bar,” says Fatima. “After the ban, I became a babysitter, domestic help and an escort, but the money was a pittance compared to that of a dancer. I was a belly dancer and the clients loved it. Now I have diabetes and high blood pressure. I have also put on a lot of weight,” she adds.

Bar owners will also give Fatima a commission of Rs 2,000 for every new dancer she brings in. They all have crystal clear requirements: dance girls have to have a fair complexion, and if they are not fair, then they have to look sexy. To this, Fatima adds her own criteria, which include a minimum bust size of 34 inches, a height of at least 5 foot 6 inches and a slender frame. “The bust size is important because it gives shape to the hips. Dancers cannot be flat-chested,” she says.

Fatima is currently tied by a six-month contract to the dance bar and has to find 35 girls by the end of December. She cannot recruit for any other dance bar until the expiry of the contract. She will then be paid Rs 40,000 a month apart from a commission of Rs 2,000 per dancer.

Pan to Mulund, an eastern suburb of Mumbai. Clad in a pair of flame-red tights, bottle-green printed tunic and brown wedges, Payal is ready for an ‘interview’ with a dance bar owner in Dadar. The 22-year-old is a trained dancer who is proficient in hip hop, salsa and Bollywood numbers. Beautiful and charming, it is difficult to identify Payal as a transvestite at first glance. “I will be lying if I tell you that it is easy for someone like me to get a job. I come from a business family but have been ostracised by them for being who I am. As a dancer, I will earn well,” she says.

Fatima too says that many bar owners are keen on employing transvestites in keeping with feedback from clients. However, not any transvestite will do; they must be beautiful, fair, slender and sophisticated. “I stand a great chance as I am English speaking too,” adds Payal.