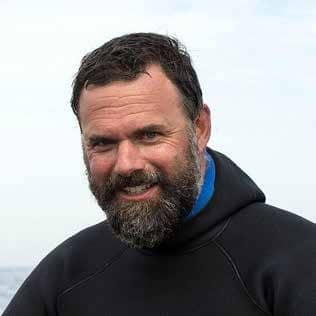 “I guess I’ve always known about the outfalls. I know we pump sewage into the sea,” Tresfon told Noseweek. “But, like everyone else, I always assumed it was treated first and that it was safe going into the sea.”

Shocked by the stark contrast between brown sewage and blue ocean, Tresfon posted the photographs on to his popular marine conservation page on Facebook. But to his surprise, none of his nearly 16,000 followers was outraged.

“I realised the two things missing were scale and context. So I went to take photographs on a day when it was really bad. The plume rises to the surface most days, but it varies. On some days it’s really bad and on others it’s not as horrendous.

“I took the standard tourist shot of Robben Island, with a 5km-long plume stretching out to sea. It showed exactly where it was and the scale of it. I posted it to social media and it went viral.

“In the post, I had said it was unbelievable that in this day and age we just dump raw poo into the sea, as it’s out of sight, out of mind. The issue ended up on the front page of most newspapers and in other media.”

Tresfon then made it his business to find out what was actually happening in the City of Cape Town’s marine outfall programme – and he has continued his research into the subject for the past five years. In the process he has got to know several scientists working on this issue, including UWC water treatment expert Professor Leslie Petrik and water pollution fundi Professor Jo Barnes (nose245).

“The three outfalls – one in Hout Bay, another in Camps Bay and the third in Green Point – have a combined capacity of 55 million litres of untreated effluent per day that goes into the sea. I was horrified that 55 million litres of raw, untreated sewage and greywater is pumped into the ocean every day via the outfalls. I discovered, with the scientists’ input, what a disaster this is.

“Worldwide, there are different protocols for effluent treatment. Terms like primary treatment and secondary treatment have specific meanings in terms of what you do to that effluent. The City of Cape Town is very misleading when they talk about “treated effluent” being pumped out to sea. When pushed, they refer to ‘pretreatment’, not ‘primary treatment’. It’s a play on words, but pre-treatment – what is that?

“What they actually do is pass the sewage through a series of screens. There is a 5ml or a 3ml screen to remove larger objects like nappies and sanitary towels. Whatever is left just gets pumped straight into the sea. No chemical treatment. Nothing to negate the bacteria. That’s not treatment, that’s just screening. There’s a big difference. It’s done on purpose because it’s the cheapest way to do it. It’s that out-of-sight, out-of-mind mentality. Nobody sees it from the land as the different pipelines go out about a kilometre.

“The sewage goes through what is called a diffuser. It’s like having a sprinkler on the end of a hosepipe. It’s meant to break the flow up and let it mix. But the freshwater and the sea don’t mix for a long time.”

According to Tresfon, the City’s website used to say that the deepwater outfalls occur far from shore so that the effluent is dispersed at the level of the seafloor doesn’t reach the surface and is far from the shore.

“Even if you deem it acceptable that we are using the sea as a dumping ground, the fact is it doesn’t work that way. The effluent bubbles to the surface on a regular basis and often gets blown straight back to shore.

“On the Atlantic Seaboard, on any westerly wind – which is our prevailing winter wind – like northwest or a west or a southwest – the effluent blows straight back to the shore. You walk along that Atlantic Seaboard and you smell it. Kayakers paddle though it and surfers get sick.”

He said he and scientists like Barnes, Petrik and others, have documented many cases of illness.

Barnes says of Tresfon: “He is a superhero – not only for what he does but for his persistence in the face of some unpleasant treatment at the hands of the authorities – like all of us he mentions. I can produce hard-drives full of data yet not equal the impact of one of his evocative photographs. He is both dedicated and extremely skilled at what he does.”

Previously sales director for a brick company, Tresfon has been diving in the Western Cape oceans for more than 30 years and working full-time as an underwater cameraman for the past ten years.

“I was one of the youngsters of my generation who was inspired by photographer/conservationist Jacques Cousteau. I was snorkeling at the age of 11, got my scuba ticket at 16 and I’ve never stopped diving.”