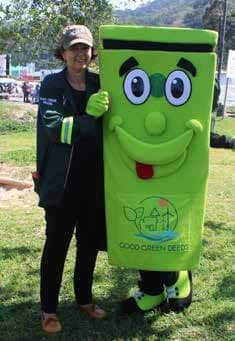 BARBARA CREECY WAS BORN IN 1958 and grew up in Johannesburg. Her parents were politically aware – her father, who grew up in the UK, was a pacifist and a member of the Communist Party and went to prison for refusing to fight in World War II. He later played a non-combat role in the war effort, driving an ambulance. Her mother’s parents were trade unionists.

Creecy’s father died when she was eight, which affected her deeply. She was highly aware she was the only child in her school who did not have two parents. “It shook my confidence. I dealt with it by applying myself academically. I did well at school.”

Her father, a chartered accountant, had also run a correspondence college teaching bookkeeping and accountancy. “My mother worked with him. The business depended on my father writing the courses and textbooks, which were updated every year. When he died the business was not sustainable. My mother had a tough time.”

Creecy attended Roedean School for girls in Parktown – “not the happiest years of my life” – where she felt “like a total misfit”. In a speech at the school recently she said the Roedean curtsy “which we learned to do every afternoon in junior school” came in handy when she met Queen Elizabeth. “The handshake with the “Good afternoon Madam” was flawlessly delivered with the curtsy. I was the only one in the line-up who got it right!! Thank you Roedean!”

Her mother, who died in 2006, was strict, pushed her children to do well and encouraged a strong sense of independence. “She instilled the belief that there’s nothing women can’t do.” Creecy also credits her mother with her early political education.