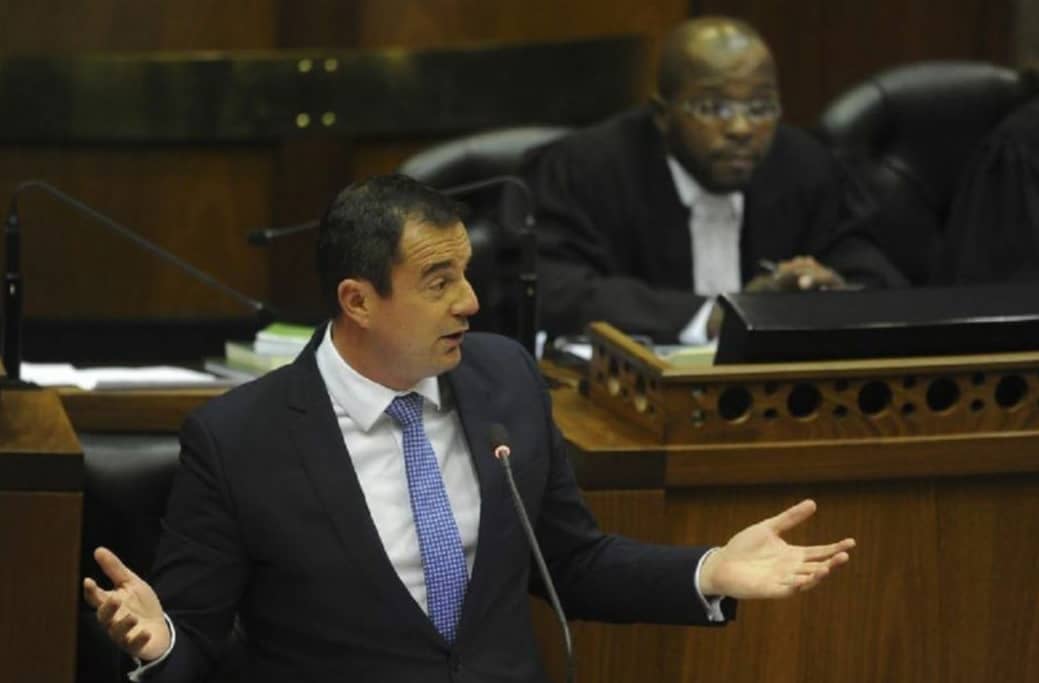 A peek inside the life of DA Chief Whip John Steenhuisen.

THE YEAR GONE BY WAS A TRYING ONE for DA Chief Whip John Steenhuisen, not least for finding himself mired in controversy over the revelation that he has no university degree. There was also the embarrassing accusation about his financial good standing in the party; that his tithes were not up-to-date, which could normally result in a public representative being asked to vacate their position.

“So many people have written me off on so many occasions. I’ve had my political obituary written many times and every time I’ve proved the critics wrong. I’ve come back stronger, bigger and better.”

Sitting in his parliamentary office decked with photos of prominent world leaders, Steenhuisen looks tired – as though he really needs his imminent family break on the Mozambican coast. Behind the overt wit and confidence, there’s a frailty, a slight vulnerability, a sadness in the eyes – perhaps a clue to his early life, which was clearly not easy. When referring to his psychologist father, he sidebarred: “You know what they say about the cobbler’s children…”

During the interview, two of Steenhuisen’s daughters, visiting from KZN, were making a racket while playing under his PA’s desk. When this reporter asked him to close the door, he declined, saying he has a policy of never being alone behind closed doors with a woman.

He alleges the row about his qualification for the position of Chief whip was part of a “personal vendetta” by DA KwaZulu-Natal leader, Zwakele Mncwango. When it erupted Steenhuisen’s supporters jumped to his defence, saying he was a star performer in Parliament. DA leader Mmusi Maimane described him as “a great legislator, chief whip and a friend”.

Steenhuisen said he had no idea why there was a vendetta against him, adding that “internal battles like this” were “short-sighted and silly” and detracted from the bigger task of getting the DA into government. He also denied claims that he was not up-to-date with his tithes in the party.

The feisty Steenhuisen is no stranger to controversy: in 2010, he resigned as DA leader in KZN when it emerged he was having an affair with DA spokesperson Terry Kass-Beaumont. At the time he was married to Julie (née Wright) with whom he has two daughters, while KassBeaumont was married to the DA’s then provincial director Michael Beaumont. Steenhuisen and Kass-Beaumont both divorced their partners and now have a daughter between them.

“It was a really tough time. I met somebody, fell in love and ended up divorcing. We’re very happily married. I resigned as I believed it was the right thing to do. Many people wrote my political obituary then,” Steenhuisen told Noseweek. He survived the scandal and was promoted to the National Assembly in 2011.

“I love going back and reading what all the talking heads said about me after I resigned the DA KZN leadership. So many of my political opponents at the time – many of whom are long since gone – said this was the beginning of the end. Look at me now.

“You have to separate the small ball from the big ball, keep your eye on the bigger picture and drive your agenda relentlessly. That’s a key to surviving in politics.” (He frequently resorts to using poitical cliches.)

Steenhuisen dismissed the furore over his qualifications as “a complete non-issue”. “Firstly I’ve never pretended I had a degree, unlike Pallo Jordan or Hlaudi Motsoeneng. Secondly, to say I only have a matric certificate isn’t true. I studied at university for three years and have a number of certificates of merit from Unisa with distinctions in Politics 1, 2 and 3 and for International Politics. I have studied, I just didn’t finish the degree. That didn’t get into the public domain because it’s inconvenient to the lie and the myth.

“I’ve also done many other courses, including through the London School of Economics on African economic development, leadership, municipal finance and legislative drafting.

“I’ve never been able to use what I learnt at university – a lot of theory that’s not applicable – in my day-to-day political jobs. I’ve benefited far more from focussed further education on key topics and on-the-job training. The notion that I’m an uneducated pillock is simply not borne out by the facts.”

Commenting on speculation that Mncwango and others want to oust him, Steenhuisen said: “I don’t know what the end game is. It’s an isolated minority of people. I’m not preoccupied by Mncwango. Internal battles are a waste of resources. If I’d wanted to join an internal debating club, I’d have joined Toastmasters. I signed up for politics to improve the lives of South Africans. You don’t do that by having a pull-’em-down approach to things within the party.

“Mr Mncwango assures me he has no animosity towards me. There might be tension owing to the fact that I’m a former provincial leader and he’s the current one. Predecessors and current incumbents don’t always get on.”