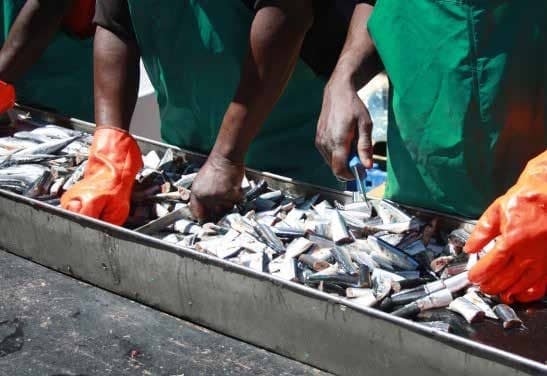 IN MAY 2014 JACOB ZUMA APPOINTED Senzeni Zokwana as Minister of Agriculture, Forestry and Fish-eries. But by July 2016 Zokwana and his department were faced with a court application to interdict them from fishing an exploratory permit worth between R80 million and R120m per year, renewable for up to 15 years. Until now nobody connected the dots, except maybe the man who later became the whistleblower in Namibia’s Fishrot scandal.

The fishing industry is a murky business, a commonly connected mob that is littered with rogue operators, professional conmen and full-blown crooks. But to categorise them strictly along those lines or pick out the honest ones among them is a difficult exercise that depends on who you speak to or how you interpret the confidential emails that WikiLeaks splashed across the internet on Tuesday 12 November last year.

Much has since been written about the WikiLeaks Fishrot Files that exposed corrupt politicians and officials in Namibia’s fishing industry. In return for lucrative fishing rights in their country they received close to $10m (R147m) in bribes from the Icelandic fishing conglomerate Samherji.

Two government ministers in Namibia resigned and are awaiting trial, together with another seven senior officials who were also caught with their hands in the cookie jar. In Iceland, Samherji’s CEO has stepped down while the whistleblower, Icelandic citizen Jóhannes Stefánsson, is in hiding, fearing for his life.

But Samherji also actively tried to get into South Africa’s fishing waters, wining and dining politicians and officials during secretive meetings as far back as 2014. It is all there to see in the WikiLeaks tranche of more than 30,000 leaked emails and confidential documents online. As many as 1,210 of these deal with an elaborate plan to capture a huge chunk of South Africa’s fishing industry, specifically horse mackerel, which earns in excess of R1.4 billion per annum. The tale unfolds mostly in emails written in 2016 between Stefánsson and Allie Baderoen. At the time Stefánsson was still Samherji’s front man in Namibia, where he had bribed politicians and officials for many years.

Baderoen, a Cape Town businessman, was steering negotiations on behalf of a South African company called Global Pact Trading 193 (Pty) Ltd which controversially received an experimental fishing permit for horse mackerel from South Africa’s Department of Agriculture, Forestry and Fisheries (DAFF) in December 2015. Global Pact obtained the permit, ostensibly by promoting the idea that horse mackerel was a cheap source of protein that could feed the poor. This, Global claimed, was not happening because the big players in the fishing industry do not bring their catch to our shores. Instead, tonnes of fish are block-frozen at sea, transshipped and exported to countries such as Angola, Zambia and the DRC without creating a single job on South African soil.

After unsuccessfully lobbying the suits at DAFF for several years, a permit was finally issued under the watch of the department’s then minister Senzeni Zokwana. Granted under section 83 of the SA Marine Living Resources Act, which allows the minister to determine and authorise any scientific investigation or practical experiment, the permit allocated a massive 8,000 tonnes of the oily fish per annum to Global Pact, but without even mentioning details of the required experiment in the official permit conditions.

The quota was worth between R80m-R120m and, with the stroke of Zokwana’s proverbial pen, this new entrant to the industry sneaked in through the transformation back door to become the second-largest horse mackerel rights holder in South Africa, without having to go through the application processes imposed on all other applicants. The permit also uniquely entitled Global Pact to fish on the West and South coasts of South Africa at any time they chose.

This raised eyebrows throughout the fishing industry. The South African Deep Sea Trawling Industry Association (Sadstia) and 21 other entities launched an appeal, saying such an allocation to a newcomer was unheard of and in conflict with the fishing capacity management regime, which was developed and implemented by the very same department that had granted Global Pact’s so-called experimental permit.