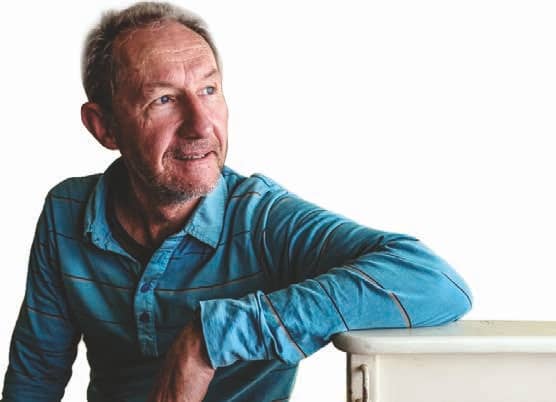 Wilhelm Verwoerd and his calling to ‘transform apartheid’

HIS BIGGEST CALLING THESE DAYS is to work towards bringing about “deep reconciliation” and “transforming apartheid” in South Africa, but there was a time when Wilhelm Verwoerd’s ambition was to become an elite solider in the South African Defence Force and to then go on to become a minister in the Dutch Reformed Church.

“My older brother Dirk was a parabat. It was such an elite thing to do. I wanted to be there too. There was no questioning of the system, no question about going to the army.”

Now 55, the grandson of apartheid architect Hendrik Verwoerd, has taken it upon himself, following an epiphany as a student, to atone for his grandfather’s legacy and to dedicate his life to doing what he calls “white work” with a view to achieving “deep reconciliation” among South Africans.

The mission of this third-generation Verwoerd has led to a virtual estrangement from his father – also Wilhelm, a retired geologist and the eldest of Hendrik Verwoerd’s seven children – who has accused him of being a traitor to the Afrikaner people and to his grandfather.

Other renowned family members include his cousin, Dr Wynand Boshoff, son of Orania founder Professor Carel Boshoff, who has just become an MP for the Freedom Front Plus.

Interviewed in the Green Café at Stellenbosch University’s Sustainability Institute, Wilhelm Verwoerd opened up to Noseweek about how he tried to make sense of his grandfather’s legacy; how he re-educated himself about South Africa’s history and how he is now determined to do what he can to reconcile black and white South Africans.

White work, he said, means doing the sort of work that his role models, fellow Afrikaners Beyers Naudé and Bram Fischer did.

“It involves cultivating a humble, self-critical historical awareness which can then lead to restitutional responsibility without the expectation of gratitude. It changes the way you engage.”

One move he’s made is to choose to live in a diverse neighbourhood.

Verwoerd and his Australian wife Sharon live in the diverse Lynedoch Eco Village attached to the Sustainability Institute and their neighbours are the black Mabeba family – with whom he has a close friendship and who he interviewed for his book.

“The village works together to reduce our ecological footprint by recycling water, using solar energy and less intensive building materials; we have regular social gatherings, trustees’ meetings and working groups to handle security, communication and conflicts.

“We’re trying to really live a different kind of vision to apartheid.”

The Sustainability Institute, in partnership with the School of Public Leadership, offers renowned master’s and doctorate programmes in Sustainable Development.

The community incorporates a primary school and youth programmes.

As we sat talking in the Green Café, children could be heard playing in the playground, while sustainability students chatted over their lattes.

Verwoed, an intense, softly-spoken man – one journalist described him as tortured – spoke about his feelings of deep loneliness within his broader family. He said his mother, torn between him and his father, has been exceptionally supportive.

He spoke about his fascination with Jung, neuroscience, quantum physics, astronomy and “the fathomless inner world” of humans – as well as his interest in spirituality, particularly the classic texts of the Desert Fathers and the Desert Mothers of the fourth Century – early Christian hermits, ascetics and monks – and the writings of people like Thomas Merton – American Trappist monk, writer, theologian, mystic, poet, social activist, and scholar of comparative religion.

A Rhodes scholar, Verwoerd described how, as an athletic student, he wanted to go to the army like all good Afrikaans boys.

“My brothers and friends were going. I believed we were fighting the communists, that it was a total onslaught, a holy war. There was no questioning of it.

“I would have gone to the army if I could. I get very competitive and I would have been full-on involved. But, looking back, I know it would have damaged me deeply as I’m a very sensitive person.

“I most probably would have ended up with severe post-traumatic stress syndrome. If you have a basic moral sensitivity and get involved in violence or war, it messes you up …it’s like a soul death.”

Nevertheless, in the eighties, the young Verwoerd was still cheering for the South African Defence Force attacks on ANC bases.

“In 1985, when I was at Stellenbosch University and about 21 years old, I remember hearing the news about one of the Botswana attacks on the ANC. There must have been 200 men in the Wilgenhof Men’s residence …standing and cheering together over the news that these ‘terrorist’ bases had been successfully attacked.”

Fate intervened and, because of a back injury, Verwoerd did not become a parabat nor even join the army.

“I would have ended up in administration … so I decided to get postponement and study.”

After graduating from Stellenbosch at the end of 1985, Verwoerd took up the opportunity to study in the Netherlands for three months on his way to Oxford as a Rhodes Scholar. It was while living in a digs in Holland, that he had his “watershed” moment.

“I landed up in this house in Utrecht, where I met a group of white Afrikaans-speaking ex-Dutch Reformed Church people who had already travelled the journey away from all that …who challenged me to my core. Through talking to them, day in and day out, I had an intense confrontation with where I came from.”

In Holland he started reading Steve Biko for the first time… and decided he wanted to meet people from the then banned ANC.

“My path had been clearly laid when I left Stellenbosch. I was going to study philosophy and theology and return to South Africa to be a Dutch Reformed Church minister.”

Verwoerd’s soul-searching experience in Holland led to his switching studies. “I thought, ‘what’s the point?’ I was angry and disillusioned with the church and switched to a Politics, Philosophy and Economics degree. I also chose political sociology as a subject. I immersed myself in studying South African history and development economics and basically understanding the South African dynamics.”