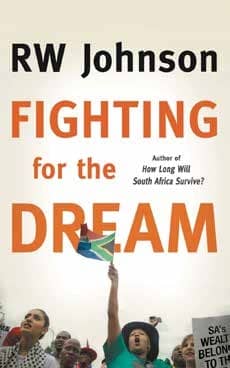 Fighting for the dream

AS I SIT DOWN AT MY COMPUTER to write this review, today’s Daily Maverick bounces on to my screen to announce: “The Presidency is rapidly losing momentum”. “Ramaphosa,” Ferial Haffajee declares, “is losing an ANC factional war to the party’s Secretary-General, Ace Magashule”.

Following within minutes of my putting down RW Johnson’s latest book, this assertion is dispiriting, to say the least. His book-length analysis is, of course, more nuanced than a one-page op-ed could be, but Haffajee’s one-paragraph characterisation of the state of the nation could stand as a summary of his book:

“South Africa is again tenuously balanced between the imperative to become a capable state versus the needs of the patronage state to keep systems malleable and institutions weak;[…] between a growth focused economy versus an economy characterised by radical and populist posturing which is a veneer for continued looting.”

Johnson’s analysis of the South African political scene is an extended weighing-up of that balance, which he, as much as Haffajee, sees as a conflict between populist irresponsibility and mature, even austere economic discipline. His analysis aims to flesh out these abstractions with concrete instances, and also to locate the sources of the present dysfunctionality in the recent history of the ANC. He does not commit the all-too-easy simplification of blaming it all on Zuma: he shows that, disastrously corrupt as the Zuma regime was, the decline from democracy to kleptocracy started much earlier, as early, in fact as the golden years of Mandela. Though Mandela was not himself corrupt, it was on his watch, for instance, that the infamous arms deal was hatched and executed. And, perhaps more cripplingly, “Mandela’s most damaging legacy [was] an overlarge and massively overpaid and underskilled bureaucracy.”