I had only visited Portugal briefly a few times in the 1990s when I made a trip to investigate the megaliths in the mountains of that country in March of 2012.

My partner Jennifer and I flew with her friend, Cathy to Lisbon from London to start our adventure. We had several good days in Lisbon and visited several museums. We then rented a car and the three of us headed west into the mountains.

Getting out of Lisbon took a while but soon we were in the countryside on our way into the mountains of the interior that form the border between Portugal and Spain. We were planning on spending the night in the town of Évora, an ancient walled city, now a World Heritage Site.

I had visited standing stones and dolmens in France, England and Ireland but this was my first visit to any in Portugal. In fact, Portugal has some of the largest megaliths in all of Europe. We headed for the Great Dolmen of Zambujeiro, or Anta Grande do Zambujeiro, one of the largest dolmens in the world. Our route would take us first to the town of Santiago do Escoural and then on small paved roads to the village of Valverde. Here we stopped for a snack and then continued on down dirt roads to find the Great Dolmen of Zambujeiro. 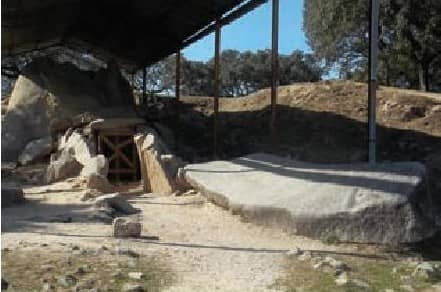 Located near Évora in the Alentejo region, this area has the largest stones of any passage mound in all of Portugal, and possibly all of Europe. The stones extend over seven metres above ground and the whole construction was covered with a mound on par with Maeshowe or the Irish passage mounds at the Boyne Valley. The style of the structure is unique to central Portugal, although smaller versions can be found at both Comenda da Igreja and Anta do Tapadão (also known as Anta da Aldeia da Mata). Zambujeiro is one of Portugal's treasures and a must for all lovers of megaliths.

The combination of such large stones inside such a large passage mound, being in an area of such high concentration, makes this passage mound one of the most significant megalithic sites in all Iberia. Anta Grande do Zambujeiro was declared a national monument by the Portuguese government on the 22nd November, 1971.

Although the internal design of the passage and raised chamber conforms to the traditional shape of other passage mounds across western Europe, Zambujeiro is the only example where the internal walls have been fashioned from large upright stones. Elsewhere in Portugal, the same basic design has been used for the construction of numerous antas, although they were all apparently only covered over with half mounds, leaving the upper parts protruding with the appearance of a dolmen.

There are several large stones lying around the site which look as though they were left in a state of semi readiness. One of the most impressive discarded stones is the leaf-shaped stone in front of the monument on the right-hand side of the entrance (see below). This stone has the appearance of having been left half-finished—although it is also just as likely that we see it today as it was originally intended.

On the left-hand side of the entrance lies a large (1.5m x 2m), flat-topped stone with a large, single-cup mark in its centre. The position of these two prominent stones on either side of the entrance gives the site a sense of ceremony, before even bearing witness to the eight giants that form the walls of the inside chamber.

A little further to the left of the large cup-marked stone lies an even larger stone with numerous smaller cup marks on its upper surface (suggesting, as with the other cup-marked stone, that they have always been in the positions we see them today).

The mound itself is 50 metres in diameter and around 7–8 metres high. It is composed of rubble packing stones of varying sizes and has been severely excavated in the past. The round shape of the mound is easily defined, except at the front which has lost all vestige of any original appearance. If the two large stones to the left and right of the passage entry were originally outside the structure, then we can conclude that it was never completely round at the front as they lie within the perimeter of the diameter.