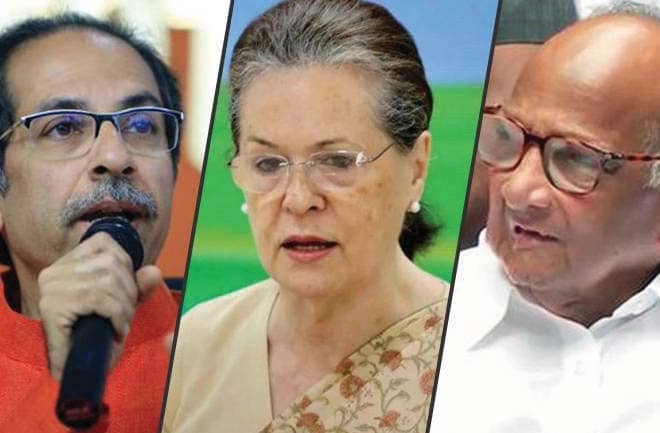 Even as the Congress and the NCP (Nationalist Congress Party) were inconclusive talks with the Shiv Sena to form a government in Maharastra after election results did not give a clear majority to any party, BJP’s Devendra Fadnavis Saturday morning took oath as the chief minister, while NCP’s Ajit Pawar was sworn in as the deputy chief minister.

This happened minutes after President’s Rule, which was imposed in Maharashtra on November 12, was revoked.

The stunning development that surprised everybody, including the main non-BJP payers, came after deliberations between Shiv Sena and NCP-Congress combine on government formation in Maharashtra apparently reached the final stage Friday. There was a consensus between Shiv Sena and Congress-NCP combine to forge an alliance together to form the next government in Maharashtra. Surprisingly, Ajit Pawar, nephew of NCP patriarch Sharad Pawar, who had been participating in the talks, had said Friday that all three members of a proposed new governing alliance the Shiv Sena NCP, and the Congress -- wanted Shiv Sena supremo Uddhav Thackeray in the chief minister’s job.

Addressing a press conference with Sena chief Uddhav Thackeray, immediately after Fadnavis was sworn in, Sharad Pawar said some MLAs of his party were cheated into attending the early morning oath ceremony in which his nephew Ajit Pawar was sworn in along with the BJP’s Devendra Fadnavis. “We are absolutely certain that the BJP-led government which is sworn in today does not have the numbers to pass a floor test. We completely back the Shiv Sena and want a government under Uddhav Thackeray.” Saying that Ajit Pawar produced fake letters of support from NCP MLAs, Pawar did not “rule out that the governor was cheated.”

While Uddhav Thackeray, in his first reaction said “This is nothing but a political surgical strike by the BJP,” the Congress called it murder of democracy. The party spokesperson alleged a conspiracy between the Union Home Minister and the state Governor. It questioned the manner of revoking President’s Rule in the middle of the night.

The BJP in its turn strongly defended its actions and blamed the Shiv Sena for going back on its prepoll alliance.

While allegations and counter-allegations will continue to flow, chief minister Fadnavis will need to prove his majority on the floor of the assembly before 30 November.

Earlier, analysts and political observers found it odd for Congress was even talking with the saffron, Shiv Sena. “Regardless of its own several compromises with the principle and practice of secularism, notwithstanding its many flirtations even with the Sena in different forms and levels in the past, an alliance with the Sena to rule Maharashtra now would be the Congress’s first major coalition with an openly saffron force. And the Sena is not just another party. Down the years, its politics has constructed the ‘Other’ in belligerent ways, always picking on the vulnerable, the migrant now and then the minority. It has stood for a brand of politics that combines chauvinism, bigotry, and intolerance with vigilantism and violence……..” Significantly, the Shiv Sena owned up to its role in the demolition of the Babri Masjid in 1992.

On the other side, “a government in Maharashtra in which the Congress participates with the Sena would not only twist the knife deeper between the Sena and BJP but arguably also make an important dent in the BJP’s winning streak. At the same time, it would hold out the promise of spoils of power for its own demoralized workers..”

WHY DID THE SENA REVOLT

Irrespective of the final outcome of the government formation drama, analyst Sunil Gatade says “the BJP has suddenly become the common enemy of three key political outfits in the state — the Shiv Sena, the Sharad Pawar-led NCP, and the Congress. How the three parties go about in their opposition to the BJP would decide how politics take shape in the months and years ahead. No doubt Maharashtra has entered into an uncertain political phase with ‘big brother’ BJP watching silently for the right opportunity to strike. Amit Shah is not a man known to take things lying down.”

Answering the question about why did the Sena revolt, analysts like Gatade “had been observing the growing unease in the Sena since it suddenly became junior to the BJP in state politics and losing its ‘elder brother’ status from the start of the alliance that arose from the need for a united fight against the then-dominant Congress……

“The first major shock to the Sena was the surprise announcement by the BJP ahead of the Assembly elections in October 2014 that it was going solo. The announcement came in the midst of talks on seat-sharing with the Sena…..not giving the requisite number of seats as sought by the BJP.

“It was a bolt from the blue for the Sena, while for the BJP it was a well-crafted strategy to leave its oldest ideological partner high and dry in the middle of the election season. The resource-rich BJP made most of the breakup with the Sena by admitting several leaders from the Congress and the NCP to ensure that it hits the bulls’ eye. The BJP got 122 seats in the 288-member House to emerge as the single largest party. The Sena, which fought valiantly, won just 63 seats.

“What made matters worse for the Sena was the way the BJP was making strides in local elections at the cost of other parties, including the Sena.”

Basically, “since the BJP and the Sena share the same political space of Hindutva in Maharashtra, it was clear the growth of one would be at the cost of the other. Some two years back, a sulking Uddhav Thackeray had lamented that the Sena’s 25 years in alliance with the BJP were ‘wasted’ years. At the same time, the Sena passed a resolution at its national convention declaring that henceforth, it would fight all elections on its own.

“……Sulking for long under the BJP’s ‘big brother’ attitude, the Sena chief sensed that it was the time to strike, and sought the chief ministership as per the ’50:50’ power-sharing deal arrived at with the BJP. The BJP denied any such agreement and the rest, as they say, is history.”

At the national level, the BJP, led by Narendra Modi, remains the dominant force but not without challenges. The recent underwhelming performances in Maharastra, Haryana and earlier in Madhya Pradesh, Rajasthan and Chattisgarh, indicate serious challenges in states as well.

BJP TRYING TO GROW ‘AT THE EXPENSE OF TRADITIONAL ALLIES’

According to Saba Naqvi, senior journalist, at the heart of the problem of the BJP in the states “is that it is trying to grow “at the expense of traditional allies…….the BJP diminishes the regional parties and takes over their space. Once the senior partner in the Maharashtra arrangement, the Sena has had to live with diminishing clout and the fear of losing its USP.” and its ally in Jharkhand, the All-Jharkhand Students’ Union (AJSU) has also “refused to agree to its seat demands for state elections that will take place in five phases starting on November 30. The AJSU is now contesting on its own. The question now is whether this psychological approach will extend to Bihar, where the BJP is in government with Nitish Kumar’s JD(U) and where elections take place exactly a year from now.”

Even as Home Minister Amit Shah has stated that the Bihar elections will be fought under the leadership of Nitish Kumar, Naqvi states “the BJP has actually been covertly working in the state with certain elements of the RJD to clip Nitish’s wings. There is a push-pull happening in Bihar and given what’s happened in Maharashtra, the BJP would want to safeguard its investment and back a weakened Nitish who could subsequently be dumped.”

BJP WOULD NEED TO REWORK IT's SOCIAL ENGINEERING’ STRATEGY

In addition, “the BJP would also need to rework its recent approach to ‘social engineering’. After the 2014 win of Narendra Modi, the BJP went against conventional caste and community parameters in choosing leadership for the states. In the two states that have most recently voted, Haryana and Maharashtra, and where the BJP’s performance was underwhelming, the party had rather courageously gone against the dominant caste syndrome. This essentially means that they selected chief ministers that did not come from social groups that have traditionally wielded power in these states

“But as it turned out, the dominant castes struck back in both states,” in Haryana as well as in Maharashtra.

In Jharkhand, too, the BJP had gone against the convention of having an Adivasi Chief Minister in a state that was supposedly created for the tribals that make up 27 per cent of the population. The party selected Raghubar Das from a backward caste to become Chief Minister. The opposition JMM-Congress-RJD alliance is projecting tribal leader Hemant Soren as the CM.

And finally, writes Naqvi, “there is now the question of the BJP’s ability to absorb defectors from other parties, a situation that is playing out most visibly in Karnataka, where the BJP got a government after orchestrating absenteeism from 17 members of the preceding Congress-JD (S) coalition. The SC, in a controversial order, has now allowed these legislators to contest elections, but they had originally fought against BJP candidates, so that is creating local-level problems…..”

In conclusion, “for all its apparent might, therefore, the BJP does have vulnerabilities in the states..”

BJP is also vulnerable when it comes to national politics, although Modi remains the most potent politician in India. His party, the BJP, became a political force after the demolition of the Babri Masjid, and its aftermath. It is highly unlikely, says Rajdeep Sardesai (senior journalist and author) that either BJP or for that matter, the Shiv Sena, “would have been a serious contender for power in Delhi or Mumbai” but for the Babri mosque demolition in Ayodhya.

Sardesai speculates whether the messy break-up between the Hindutva two parties in Maharastra marks “the end of militant Hindutva politics as a potent instrument for political benefit, or does it reaffirm ‘opportunism’ as the most durable ideological ‘ism’ in politics?”

In the view of Sardesai, there are limits to militant Hindutva politics. “Take, for example, the contentious temple-mosque dispute in Ayodhya. It may have galvanized the BJP’s core voter, but its resonance was always both socially and geographically limited, and to an extent, time-barred too. It initially made the BJP a ’20%-plus’ party, but the great leap to becoming the dominant national party has only happened in the last decade. The doubling of the BJP’s vote share from 18% in the 2009 general elections to over 37% in 2019 is a reflection of the decline of the Congress and the ascent of Modi. The incremental vote to the BJP didn’t come from its allegiance to a Ram Mandir, but from the hope and trust in Modi’s leadership and the growing frustration with the national alternatives.”

THE GROWTHïšº DEVELOPMENT AGENDA IS BEGINNING TO STALL