Life After RCEP: Future Lies In FTAS With The EU, US And GCC 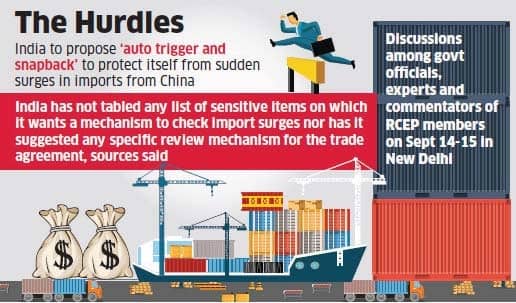 Life after RCEP: Future lies in FTAS with the EU, US and GCC

The debate over India not joining the Regional Comprehensive Economic Partnership (RCEP) continues with some analysts supportive of the government decision to protect industry and agriculture while others critical of India shying away from being competitive.

Justifying India’s stand on the RCEP, Mohan Kumar (Chairman, Research and Information System for Developing Countries - RIS; former Indian ambassador to France, and former Indian negotiator at GATT/ WTO), points to many areas that were counter to its interests.

“One, India increased its tariffs on a range of items recently and obviously, if it agrees to bring down tariffs, the starting point has to be actual tariffs now, not what existed before. There was no agreement on this.

“Two, safeguards against import surge requested by India did not find favour. China did not do enough to address its China-centric concerns of cheap imports flooding the market. Nor could the other RCEP partners influence China to do so. Japan’s Prime Minister is believed to have tried.

“Three, India tried and failed to put in place a process for strict rules of origin so that there was no circumvention and the possibility of cheap imports flooding the country.

“Four, RCEP partners are believed to have insisted that any trade concessions obtained by India elsewhere had to be made available to them on an MFN (most favoured nation) basis, something the country couldn’t agree to.

“Five, there was no resolution of India’s concerns about non-tariff barriers vis-a-vis ASEAN and China.

“Six, there were real fears here that dairy imports, especially from New Zealand would swamp the market and kill Indian co-operatives.

“Seven, RCEP partners were less than enthusiastic about accommodating India’s interests in ‘Services’ in general and ‘Mode 4’ interests relating to movement of professionals, in particular.”

India now needs “to see what lies ahead. The brutal fact of the matter is that the WTO-anchored, MFNbased regime that India banked on so heavily is drawing to a close. By some estimates, an overwhelming majority of international trade occurs on the basis of Free Trade Agreements (FTAs) or preferential tariffs. India has at least five trading partners, namely, the EU, US, Gulf Co-operation Council, China and ASEAN with whom bilateral merchandise trade is close to $100 billion each. Yet, the only one with which it has a FTA is, ironically enough, ASEAN……”

India should therefore move on and look at FTAs with the EU, US and GCC. The real worry, writes Mohan “is that the world is moving rapidly towards high-quality FTAs. Indeed, there are those who believe RCEP is a relatively low quality FTA. And when compared to USMCA (United States–Mexico–Canada Agreement) or CPTPP (Comprehensive and Progressive Agreement for Trans-Pacific Partnership), some may argue that RCEP is indeed less all-encompassing. So, if India finds joining RCEP difficult, it may find the evolving international trading environment unfriendly, if not downright hostile. This is where the Government must step in and ask the private sector to shape up. Barring agriculture which will always be sensitive and deserves protection, other sectors cannot expect to be mollycoddled forever……….”

LONG TERM INTERESTS HAVE BEEN DAMAGED