India In The International Kaleidoscope 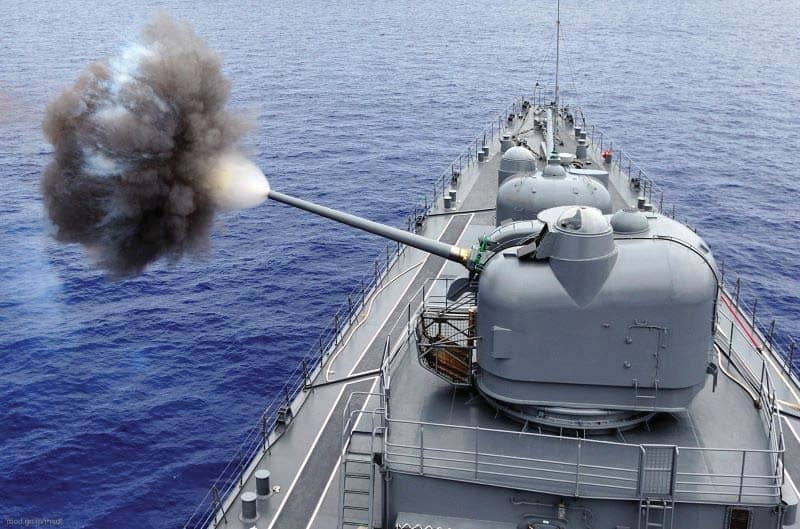 INDIA - US: SALE OF NAVAL GUNS WORTH $1 BILLION TO INDIA

The Trump Administration has notified to the US Congress its determination to sell USD 1 billion worth of naval guns to India for use against warships, anti-aircraft, and shore bombardment, in a move that would enhance the lethal capabilities of the Indian Navy.

The proposed foreign military sale of up to 13 MK-45 5inch/62 calibers (MOD 4) naval guns and related equipment is at an estimated cost of USD 1.0210 billion, Defense Security Cooperation Agency said in its notification to the Congress Tuesday. To be manufactured by the BAE Systems Land and Armaments, the proposed sale will improve India’s capability to meet current and future threats from enemy weapon systems, the notification said.

“The MK-45 Gun System will provide the capability to conduct anti-¬surface warfare and anti-air defense missions while enhancing interoperability with the US and other allied forces,” the notification said.

India will use the enhanced capability as a deterrent to regional threats and to strengthen its homeland defense, it said. The proposed sale of this equipment and support will not alter the basic military balance in the region, it said.

According to the notification, this notice of a potential sale is required by law and does not mean the sale has been concluded. With this, India has become one of the few countries that the US decided to sell its latest version (Mod 4) of its naval guns.

The other countries to have been sold with MOD 4 naval guns so far are Australia, Japan, and South Korea. The one given to Thailand is an upgraded MOD 4 version. The US has also determined to sell these to a few other allies and friends including Britain and Canada

INDIA - US: INDIA IS A CRITICAL ELEMENT OF THE SOUTH ASIA STRATEGY

Developing strategic partnership with India is a critical element of President Donald Trump’s South Asia strategy, a senior administration official said Thursday noting that there were encouraging results of the move.

“The United States welcomes India’s substantial investment in and assistance to Afghanistan. And we will continue to support efforts to achieve an honorable and enduring outcome in Afghanistan that preserves our investment in Afghanistan’s future,” said Nancy Jackson, Deputy Assistant Secretary of State for Afghanistan Affairs.

Speaking at the event, Indian Ambassador to the US Harsh Vardhan Shringla said India has played an active role in the reconstruction and development of Afghanistan since 2001. India has completed 400 social infrastructure projects in this war-torn country and another 150 were underway, he said.

All the Indian projects are undertaken in partnership with the Afghan government and are spread across each and every one of the 34 provinces of Afghanistan in diverse fields of development, including education, healthcare, infrastructure, administrative capacity, flood control, irrigation, agriculture, sports, he said.

“These projects are a reflection of India’s enduring commitment towards Afghanistan’s reconstruction,” Shringla said, adding, “India is committed to supporting Afghanistan in its journey to emerge as a united, sovereign, democratic, peaceful, stable, prosperous and inclusive nation.”

Delivering the keynote address to ‘The India-Afghanistan Relationship: Examining Historical, Political, Economic, and Cultural Ties’, organised by think tank Hudson Institute, Jackson said “In 2017, the President’s South Asia strategy acknowledged that military power alone will not bring peace to Afghanistan or stop the terrorist threat arising from that country.” Rather, the American military effort is designed to create conditions for a negotiated settlement. This effort involves military resolve in Afghanistan, with decisions based on conditions on the ground, she told the Washington DC audience.

“Another critical element of the President’s South Asia strategy is for America to further develop its strategic partnership with India — the world’s largest democracy and a key security and economic partner of the United States,” Jackson said. The senior State Department official appreciated India’s important contributions to stability in Afghanistan, including USD 3 billion in civilian assistance since 2001. “For our part, we remain committed to pursuing our shared objectives for peace and security in South Asia and the broader Indo- Pacific region,” she said.

India has done much to help Afghanistan’s development, from the construction of dams, roads, electrical lines, irrigation systems, and telecommunications infrastructure to building a stadium in Kandahar for Afghanistan’s cricket team, she said.