India Decides Not To Be Part Of RCEP: Implications 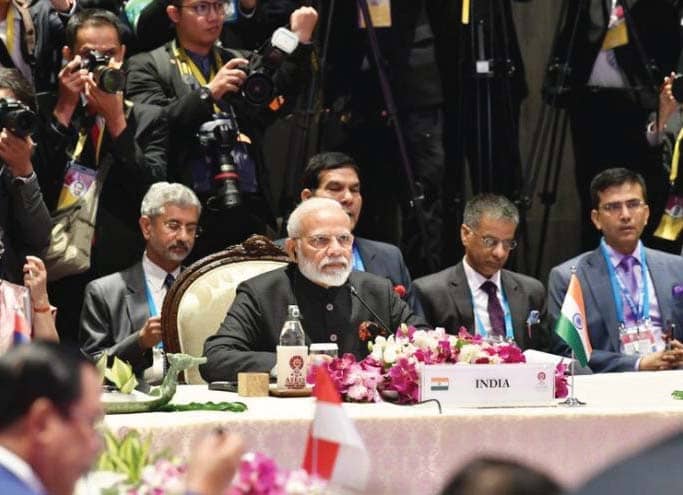 India finally decided not to be part of the Regional Comprehensive Economic Partnership (RCEP) until “significant outstanding issues” were resolved.

The deal in its present form does not fully reflect “the basic spirit and the agreed guiding principles of RCEP” Prime Minister Narendra Modi said in his statement at the 3rd RCEP Summit in Bangkok Monday. “When I measure the RCEP Agreement with respect to the interests of all Indians, I do not get a positive answer. Therefore, neither the talisman of Gandhiji nor my own conscience permit me to join RCEP,” Modi added, referring to the stakes of Indian farmers, traders, professionals and industrialists, all of whom have protested against the government’s decision to go ahead with the negotiations in the last few months.

All other 15 countries involved in the negotiations stated that they were ready to sign the mega trade deal in 2020. They will, however, try to persuade India to agree to the same. “All RCEP Participating Countries will work together to resolve these outstanding issues in a mutually satisfactory way. India’s final decision will depend on satisfactory resolution of these issues,” the joint statement by RCEP members said.

Addressing a press conference Tuesday, Commerce Minister Piyush Goyal left the issue of India joining later open “if the 15 nations make a sincere effort to resolve our concerns, to give us confidence, and help us balance the trade inequality, then I think every nation should talk with their friends……..”

It is understood that Indian officials, who had hoped for consensus on pushing the timelines on an agreement to next year, reacted angrily to the joint statement over the wording of the statement because it concerns “were not being accommodated”. They also accused the other nations of attempting to “gang up” in an attempt to force India to toe the line on issues like safeguards against flooding of Chinese goods, allowing Indian labour mobility to other countries for services, and agricultural and dairy tariffs.

According to a government note which was also circulated to the media, the outstanding issues included major trade deficits with all the countries in RCEP, lack of assurances on market access, and RCEP negotiators’ insistence on keeping 2014 as the base year for tariff reductions. The note also said India was in the process of reviewing its Free trade Agreements (FTAs) with Japan, Korea and the ASEAN grouping, and discussing trade agreements with Europe and the U.S., while criticizing the previous UPA government for “poor negotiations” in the past. The note called agreements like RCEP “in reality FTAs by stealth” with countries with whom India has a “huge trade imbalance” — a veiled attack against China with which India has a $53 billion deficit.

The government denied reports that it had made any “last-minute demands” at the ASEAN and East Asian Summits on RCEP.

The decision to join RCEP met with stiff resistance in India, however, from most industry and farmers’ bodies. The All India Kisan Sangharsh Coordination Committee (AIKSCC), which represents about 10 lakh farmers, had called for an all-India protest Monday against joining. Separately, the Confederation of All India Traders, which represents about seven crore traders, made several representations to the Commerce Ministry to keep steel and allied services, and dairy out of the purview of the RCEP agreement.

However, while certain industries such as steel, agriculture, and dairy have been vocally against India joining RCEP, the Confederation of Indian Industry in a report Monday said the naysayers had only taken the limited view of curbing imports from China and have not looked at the opportunities for export growth that India could exploit by joining RCEP.

The (RCEP) is a trade deal that was being negotiated between 16 countries. They include the 10 Association of Southeast Asian Nations (ASEAN) members (Brunei, Cambodia, Indonesia, Laos, Malaysia, Myanmar, the Philippines, Singapore, Thailand, and Vietnam) and the six countries with which the bloc has free trade agreements (FTAs) — India, Australia, China, Korea, Japan, and New Zealand.

The purpose of the deal is to create an “integrated market” spanning all 16 countries. This means that it would be easier for the products and services of each of these countries to be available across the entire region.

Billed to be the “largest” regional trading agreement, the countries involved account for almost half of the world’s population, contribute over a quarter of world exports, and makeup around 30% of the global Gross Domestic Product.

Negotiations to chart out the details of this deal have been on since 2013, and all participating countries had earlier aimed to finalise it by November 2019.

After years of negotiations, India finally opted out of the RCEP despite the fact that such a large free trade area like the RCEP could confer economic benefits all around. But the benefits would happen, according to the Asia Age “provided the participants export with as much vigour as they import to meet the requirements of an expanding economy. However, the picture the Indian economy now, following a series of misconceived policy steps in the past five years, didn’t place it in the right frame to take advantage of the free trade area. Manufacturing and export data have been plunging for two years. The banking sector is in turmoil. Agricultural productivity and wages are down. At such a time, joining a free trade area comprising some of the world’s boldest economies is to invite trouble.”

‘India has again demonstrated its growing assertiveness in the international arena’

Agreeing with the above is The Tribune. “At a time when the country’s economy is in a tailspin, committing itself to this treaty would have been political as well as economically injudicious, if not suicidal, for the government. India has also boldly stated that it is ready to plough a lonely furrow rather than compromise on its interests……..

“With its tough stand, India has again demonstrated its growing assertiveness in the international arena. Earlier this year, External Affairs Minister S Jaishankar had unequivocally told US Secretary of State Mike Pompeo that India would go by its national interest on the S-400 missile defence deal with sanctions-hit Russia. India had sealed that pact last year despite US warnings on imposing trade curbs under CAATSA (Countering America’s Adversaries Through Sanctions Act).”

INADEQUATE PROTECTION AGAINST SURGES IN IMPORTS

Key issues that have prevented India from coming on board include “inadequate” protection against surges in imports. This is a major concern for India, as segments of its industry has voiced fears that cheaper products from China would “flood” the market. India had been seeking an auto-trigger mechanism that would allow it to raise tariffs on products in instances where imports cross a certain threshold.

Stating that India kept its self-interest at the forefront, Soumya Kanti Ghosh (Group Chief Economic Advisor, State Bank of India), points out “India ran a merchandise trade deficit with 11 out of the 15 other members of RCEP in 2018-19, totalling $107.28 billion. India’s overall merchandise trade deficit was $184.00 billion in 2018-19. In 2018- 19, 34 percent of India’s imports were from this region, while only 21 per cent of India’s exports went to this region. China is the biggest trade partner amongst these countries and the major concerns that India had throughout the negotiations were with regard to China.

“………There is a fear that the imports of cheaper electronic and engineering goods from China could increase further post the signing of RCEP which in turn could have a negative impact on the manufacturing sector……..”

Ghosh mentions the “move towards 2014 as the base year for tariff reduction, an automatic trigger mechanism to curb sudden surges in imports and the decision on which products it doesn’t want to offer the same tariff concessions to all countries, need to be sorted out. India’s electronics and mobile industry, for instance, is moving towards self-sufficiency, and a move towards 2014 rates could mean a huge step backwards.”