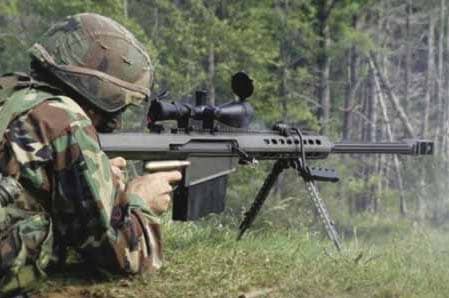 India has been forced to reduce its requirement to just 1,800 sniper rifles and 2.7-million ammunition-less than a third of its army’s total need — driven by budgetary pressures and the need to fast-track the purchase for counterinsurgency troopers posted in Jammu and Kashmir and North East.

The 1.3 million-strong Indian Army has had to prune its original requirement of 5,720 sniper rifles and 10.2-million ammunition, which would have cost the state exchequer Rs 1,000 crore ($140 million), so that it could prioritize arms purchases and get more modern weapons for its troopers, people with knowledge of the matter told Defence. Capital today.

The Indian Army has on Nov. 11 issued a Request for Information (RFI)-an initial document for assessing available equipment and technology in the market for a specific requirement- indicating its search for buying the lowered quantity of 8.6mm sniper rifles and .338 Lapua Magnum ammunition in one year.

The Indian armed forces have 450,000 infantry soldiers, of whom only half go into ground battle and a very small number of them use the sniper rifle to take out specific enemy targets through precision firing. The sniper rifles purchase move is part of Prime Minister Narendra Modi‘s $250-billion modernization plan for the Indian armed forces, as the infantry soldiers continue to face the brunt of deadly attacks in disputed border areas such as Kashmir and the North-East.

The earlier effort by the Indian Army to buy 5,720 sniper rifles in a process that began in Feb. 2018 through a Rfiand a Request for Proposal (RFP in defense parlance, but tender in common usage) in Sep. 2018 was scrapped in July this year after four vendors -US-based Barrett and MSA Global, Indonesia’s Pindad PT and Russia’s Rosoboronexport -failed to meet technical requirements, including technology transfer for manufacturing the ammunition by local industry.

This was the third time India had scrapped a tender for sniper rifles in the last 10 years. The first RFP issued in 2009-10 under the fast-track procurement procedure had to be retracted because of complaints about the yardsticks adopted for the trials of two vendors, who were down-selected. This was followed by another RFP in 2012-13, but that too was withdrawn over difficult General Staff Qualitative Requirements (GSQRs) formulated by the infantry directorate at the army headquarters.

Through the new bid to buy a smaller quantity of sniper rifles and ammunition, India wants to overcome the hurdles in identifying the vendor for the equipment and making the direct, urgent purchases, before it decides on placing orders for 4,000 of its remaining requirement for sniper rifles through a separate procurement process that could involve transfer of technology and local manufacturing.

The reason for the urgent purchase is not difficult to fathom, as the Indian troopers have been facing sniper fire from Pakistani troopers, resulting in casualties, which could be easily avoided if retaliatory taking-out of targets are carried out.

With these rounds of new purchases of sniper rifles, the Indian Army will replace the in-service Soviet-era Dragunov SVD rifles and its 7.62×54MMR ammunition procured in the mid-1990s. The Dragunov sniper rifle with a range of 800 meters is not equipped with modern magnification and sight systems as well as bipod systems, while the ammunition is very expensive.

The current requirement for modern sniper rifles envisages a range of 1.2 km and a service life of 10 years or 5,000 rounds, whichever is earlier. The new sniper rifles should not weigh more than 9 kg along with bipod, empty magazine, and telescopic sight.

India was committed to achieving a $26 billion defense industry by 2025, said Defence Minister Rajnath Singh Monday while addressing a business seminar ‘India Rising’, organized by the Indian Chamber of Commerce at the Defence & Security Exhibition 2019.

Under the Draft Defence Production Policy 2018, the Indian government eyes $5 billion defense exports by 2025. “On the one hand this target is ambitious, but at the same time it’s encouraging that India’s defense exports have grown almost six-fold in the last two years,” he said.

$10 billion investment in aerospace and defense goods and services was expected by 2025, which could provide employment to two-three million people, he said.

Singh stressed the government’s resolve to promote self-reliance in defense through the five I’s -- Identification, Incubation, Innovation, Integration, and Indigenisation.

Over 50 technological designs would be made to meet the armed forces’ requirements, while a Defence Innovation Fund was being planned to support the government participation through equity investment in defence startups, he said.

“A new transfer of technology (ToT) policy is being developed to simplify the way of transferring technology by DRDO to the industry. More than 900 ToT licensing agreements have been signed with industries. It’s a major step towards making the defense manufacturing sector self-sufficient,” Singh said.

“The government plans to establish two defense corridors in Tamil Nadu and UP. A Defence Innovation Hub is functioning in Coimbatore. A Defence Planning Committee has been formed. In this regard, the UP government plans to build a defense manufacturing corridor along with the proposed Bundelkhand Expressway, which will help in making India self-reliant in defense production,” the Defence Minister said.

Closing the tech gap: Separately, the defense minister had called upon the Defence Research and Development Organisation (DRDO) to concentrate on high-end, futuristic areas of technology. This, according to G Mohan Kumar, former Defence Secretary Domestic, “is a pointer to the infirmities of our defense R&D.” Defense production and R&D, he says “will not make the desired leap unless MoD proactively supports the private sector in manufacturing and R&D, and revamps the DRDO.

“Defence manufacturing has to survive in a monopsony (the government is the sole buyer). This necessitates specialization and longterm commitment to invest in product development and maintenance. The strategic partnership (SP) policy was incorporated in the defense procurement procedure to harness the latent capabilities of the private sector for the production of major equipment by nurturing a sophisticated ecosystem of small and medium component manufacturers. It is time the MoD tapped the entrepreneurial energies of the private sector to bridge the technological gap between India and the advanced military powers.”

We have to reflect deeply, says Kumar “on defense R&D being a monopoly of the DRDO. While the DRDO has done excellent work in some advanced areas, its unfocused organic growth in all directions has rendered it unwieldy. India has made little headway in developing high-tech materials like high-grade alloys for use in defense equipment. Unless we achieve a breakthrough in this field, the development of aero-engines and other high-performance equipment will remain a pipe dream……….