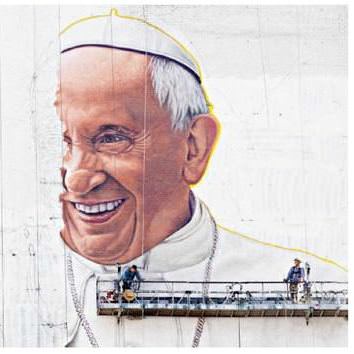 WHEN POPE FRANCIS makes his first trip to the United States this month, he will act on a grand stage much as previous popes have done. There will be a private meeting with the president and public Masses in Washington, D.C.; New York; and Philadelphia. He will address the United Nations. Two aspects of his trip, though, will be unprecedented: He will be the first pope to address Congress, and, equally significant, he will visit homeless people in D.C., underprivileged third-graders in East Harlem, and prisoners in a Philadelphia correctional facility, where he will minister to 100 inmates and their families.

Counterbalancing his meetings with world leaders is a classic Francis move and a potent embodiment of his global agenda. In the two and a half years since his election, Francis has earned a reputation for his simplicity and directness, but the pope from Argentina is also a master of political symbolism and an immensely shrewd politician. He knows that the eyes of all nations will be on the message “the Pope of the Poor” delivers to the world’s richest nation.

The pope’s religious message—that the Gospel should be joyful, merciful, and embrace everyone, especially the poor— is plain and direct. And yet the political strategies he uses to enact that vision are sophisticated and even wily. Inside the Church, he has set out to modernize the Vatican, rooting out corruption and careerism and placing the pastoral care of ordinary people before dogma and rules. Love and inclusion now come before judgment and condemnation. In the larger world, his mission is just as radical: to realign global policy to better aid the poor and excluded. That has included pushing nations to address the prickly issues of climate change and economic inequality.

As a political operator, Pope Francis can be diplomatic but also stubbornly defiant. And he knows how to balance these approaches one against the other for maximum practical effect. Take, for instance, his recent encyclical on the care of the environment, Laudato Si’, in which he rebuked the world’s politicians for weak leadership in combating global warming. The document was timed to influence three major U.N. summits—one on aid financing in Addis Ababa in July; the U.N. General Assembly to fix sustainable-development goals, at which he will speak on this visit; and the climate-change conference in Paris in December.

Even before the document was launched, skeptics began a campaign of “pre-buttals” designed to undermine the impact of the pope’s message. To counter them, the pope cited within the document several previous popes, bishops of more than 15 nations, Greek Orthodox theologians, and the findings of the 97 percent of scientists who have concluded that climate change is created largely by human activity. This is the voice of many, not just one man, was the pope’s message.

Francis is unafraid of confrontation. To launch the encyclical, he recruited a top global-warming expert, professor Hans Joachim Schellnhuber of the Potsdam Institute for Climate Impact Research, who once described the U.S. population as “climate illiterate.” He also invited the activist Naomi Klein, a self proclaimed “secular Jewish feminist,” onto a Vatican platform to promote the document. The episode demonstrated Francis’s awareness of the importance of alliance- building. This pope, who pointedly gave several interviews early on to one of Italy’s leading atheist intellectuals, does not confine his networking to within the Church, especially when, as Klein put it, “many powerful Church insiders simply cannot be counted upon to champion Francis’s transformative climate message.”

KLEIN IS RIGHT, but it’s not just his message on climate change that has faced resistance. Francis inherited a Roman hierarchy that was staunchly conservative. Almost immediately, he began overturning the old way of doing things, bypassing the usual channels and preferring the unofficial to the official: When Francis wanted to get a message to the Chinese government, instead of using a Vatican diplomat, he sent it via some Argentine missionaries who he knew had good contacts in China.