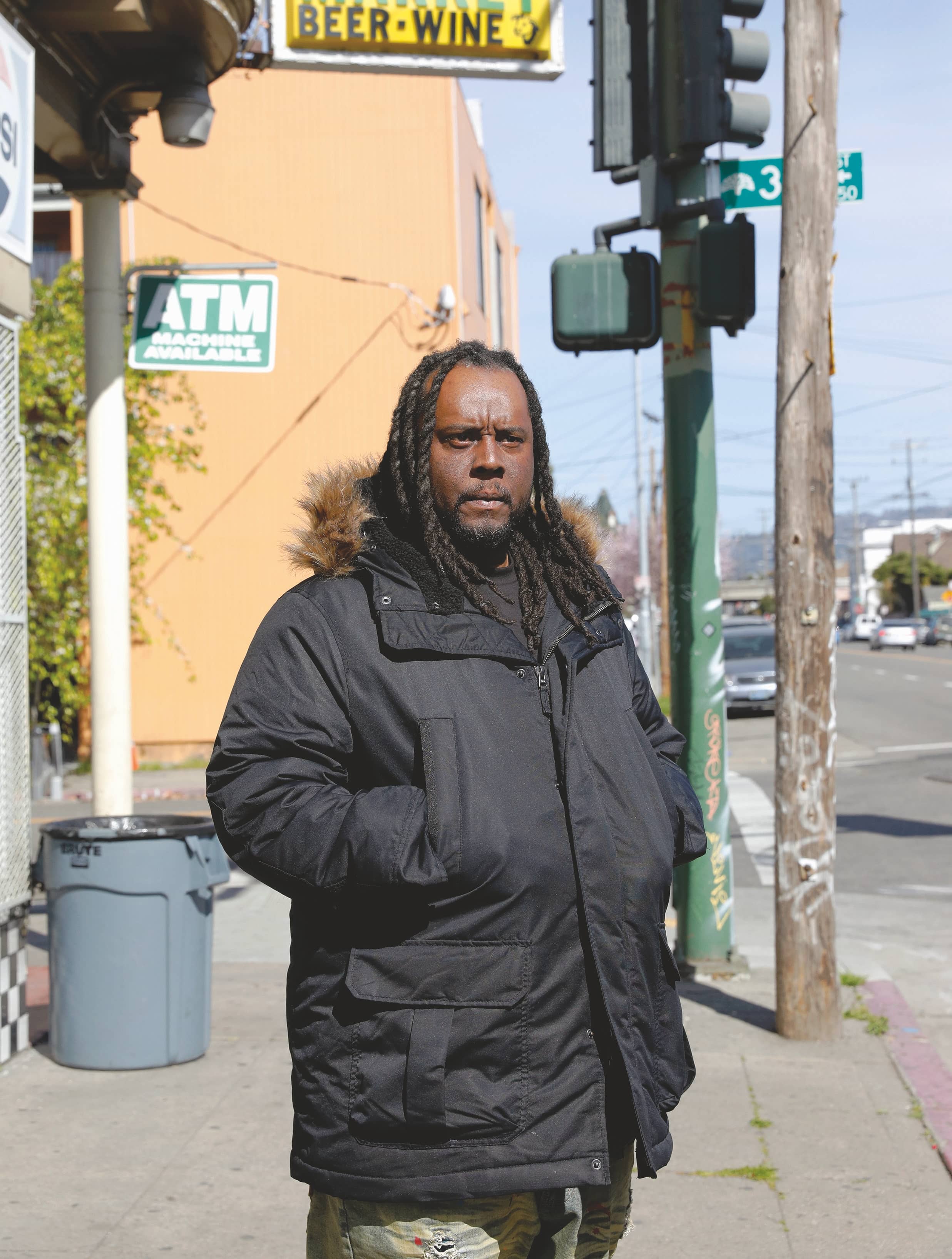 Oakland residents convinced the city to rethink how it tackled gun violence. Now, amid calls to defund the Police other cities are eyeing it's strategy.

IN AUGUST 2018, a few weeks after he was shot eight times at a party in Oakland, Andre Reed was recovering at his mom’s house, his wounds still open, when he got a message on Instagram. It was an old friend from his school days. She said some people were looking for him and wanted to talk.

Reed, then 35, had recently been released from federal prison, after years of bouncing in and out of the criminal justice system. “Is this the police?” he asked. She said she didn’t think so but would check. “They don’t get nothing to do with the police, nothing like that,” he recalls her saying when she messaged him back.

Reed was being sought by outreach workers who wondered if he’d like to meet with a life coach to help him get his feet back on the ground. It was the latest version of a strategy to drive down gun violence in a city with one of the country’s highest murder rates. The program, called Operation Ceasefire, draws on data to identify people who are at the highest risk of shooting someone or being shot themselves. At a meeting with police and community members, known as a call-in, the recruits are told they’ll be punished if they keep engaging in violence. But they’re also offered access to housing, jobs, medical care, and life coaches, plus a monthly stipend if they accomplish goals like signing up for health insurance, opening a savings account, and staying in touch with probation officers. The idea is to try to prevent shootings not by flooding the streets with armed police, but by connecting people with resources and helping them build relationships.

Reed seemed like a perfect candidate. For nearly his entire childhood, his dad had been in prison, and Reed himself had been in and out of juvenile detention since the seventh grade. And he’d already had run-ins with gun violence. That July, he’d gone to a barbecue outside an apartment building in West Oakland. As he polished off some Chinese food while catching up with friends, two men in black ski masks walked through the gate and opened fire, striking Reed’s legs. He collapsed beside a car, his thoughts on his 5-month-old daughter and 10-year-old son. The shooters fled and an ambulance arrived, rushing him to a nearby hospital, where he stayed for about a week. Now, back at his mom’s house in the suburbs, he struggled to move. He slept most of the day, groggy from pain-killers, or watched movies. He worried he’d have no other option but to rejoin his crew on the streets once he healed.

The question of how to reach men like Reed, who are at high risk of committing or falling victim to violence, is pressing in cities like Oakland. Nationally, murder rates have fallen since their last peak in the 1990s and are now back to their 1965 levels. But the progress has been uneven. For Black men between the ages of 15 and 24 in the United States, homicide, mostly by gunfire, is still the leading cause of death by far, killing more of them than the next nine top causes of death combined. During the first few months of the pandemic, shootings crept up again in some cities, including Oakland.

Many politicians have long believed that to reduce violence, cities have to put more officers on the streets and make more arrests. Ceasefire flips that script: It calls for fewer arrests for nonviolent acts, an end to the scorched-earth tactics that fueled the drug war, and an emphasis on reaching the relatively small number of people involved in most shootings. In 2015, half of all gun homicides in the United States took place in just 127 cities and towns; more than a quarter were in neighborhoods representing only 1.5 percent of the total population, according to a 2017 report by the Guardian. An analysis of shootings in Oakland revealed that just 0.1 percent of the city’s population was responsible for most of its homicides. But many men at the highest risk of this violence—often members of gangs, with a history of shooting or being shot—are also the most isolated from social services, or the most resistant to them.

Dozens of cities have experimented with programs like Ceasefire in recent decades, starting with Boston in 1996. Yet the approach, which goes by various names, has had mixed results, partly because cities have rolled it out in vastly different ways. Some city leaders promise social services but spend more money on the policing aspect of the program: They lean on cops to track down men at risk of violence, threaten them with punishment, and arrest them if they don’t get in line.

When outreach workers in Oakland first got in touch with Reed, he knew Ceasefire had a reputation in the neighborhood—guys who slipped up again could find themselves in handcuffs. And going back to prison was the last thing he wanted. Plus, he was tired of case managers. He still had flashbacks to parole programs from years earlier, where he mostly watched movies and wasted time. “I always wanted to change, but all the programs just, you know, blowin’ smoke,” says Reed, who has long braids and tattoos of skeletons and smoke winding up his arms.

Oakland’s residents have other reasons to be skeptical of a reform effort involving the police. The city’s cops have been under federal oversight for brutality and civil rights abuses for 17 years. And Oakland tried and failed to implement Ceasefire twice before, in 2007 and 2011. In 2013, at the behest of pastors and other residents, the city rolled out Ceasefire for the third time, but with a twist: The program would scale back its emphasis on law enforcement and focus, through life coaching, on helping participants develop positive relationships with mentors who grew up in similar neighborhoods as they had.

It’s working. Between 2011 and 2017, the number of shootings in Oakland dropped by more than 50 percent. Meanwhile, arrests have declined, and officers are solving more murders than they once did. Police departments in New York City, Chicago, Minneapolis, and Washington, DC, have sent officials to observe the city’s alternative model. “What Oakland’s doing is certainly the Ceasefire strategy, but it’s a very evolved version,” says Mike McLively, an attorney at the San Francisco–based Giffords Law Center to Prevent Gun Violence. Life coaches, clergy, and victims’ family members all play important roles in reaching out to at-risk men. Oakland “paid much more attention to a strong community voice and to providing a more robust set of social services,” says researcher Thomas Abt, a former federal prosecutor during the Obama administration and author of the 2019 book Bleeding Out.

And now, amid nationwide protests to defund law enforcement and rethink how cities handle public safety, curiosity about Oakland’s strategy is growing. In Minneapolis, after protests over the killing of George Floyd sparked a debate about dismantling the police, some City Council members proposed funneling more money into a program like Oakland’s.

Reed was still skeptical of Ceasefire on a warm day in September 2018 when he, his mom, and his son drove two and a half hours from her house in suburban Oroville to Oakland to get more information on the mentorship program. Leaning on a cane, Reed limped from the car into an office building and rode the elevator to the third floor. At a conference table surrounded by a handful of life coaches, he sat quietly across from Leonard Haywood, a polite man about a decade his senior. Haywood offered to work one-on-one with him as a coach. Reed recalls, “I thought he was probably full of shit.”

At the end of the meeting, Reed didn’t make any promises. But when he went home again, the texts started coming. “Hey Dre, how you doing?” Haywood wrote shortly afterward. “Just wanted to check in, see how everything is going. Let me know if you need anything, if there’s anything we can do.” Haywood kept in touch with Reed for about two months, asking how the recovery was going. “I was totally surprised,” Reed recalls. The texts and calls made him wonder if Haywood actually cared. Reed said he’d consider working with him if he moved back to Oakland.

FROM THE BEGINING, the call for Oakland’s police to rethink their approach to gun violence came from community members—and the odds were very much stacked against them. In 2003, Oakland was reeling from a murder crisis. The city had seen an 81 percent surge in homicides over the previous four years, to 113 killings in 2002. But Mayor Jerry Brown scoffed at a City Council member’s suggestion that offering better job training for people with criminal records could help prevent shootings. “Do you think if we put the Godfather and his gang in a job program, they’d change their line of work?” Brown told a reporter in 2002. He instead pushed to hire 100 more police officers, who could flood high-crime areas of East and West Oakland in search of drugs and guns.

Then the killings came to Barbara Lafitte-Oluwole’s doorstep. LafitteOluwole, a community organizer originally from Louisiana, lived in a green and burgundy Victorian house in West Oakland. On June 14, 2003, her stepson, Tokunbo, was celebrating his 22nd birthday with friends outside a kfc when a man fired six bullets into him, killing him instantly. Detectives never caught the shooter. Lafitte-Oluwole believes her stepson was targeted because he was preparing to testify against men who allegedly killed his best friend months earlier after an argument about a missing Uzi.

Steeped in grief, Lafitte-Oluwole started learning about Boston’s Ceasefire program, which cut youth homicides in half before city officials lost momentum and abandoned the strategy in 2000. She began working with a group of activists who bombarded public safety meetings with demands that city officials try the strategy. Eventually, in 2007, Mayor Ron Dellums agreed. Under Ceasefire, police would summon men at risk of shootings to a call-in.

Or at least that was the theory. After police officers surrounded people’s houses with squad cars to drop off the “invitation” to the first call-in, only two men showed up. By the end of 2010, the first iteration of Ceasefire in Oakland was dead, having done little to quell the shootings. The next year, a 3-year-old was gunned down while walking with his family in East Oakland. Officials briefly relaunched Ceasefire, but it fizzled out. By then, Oakland had the third-highest murder rate of any midsize city in the country.