The Young and The Relentless 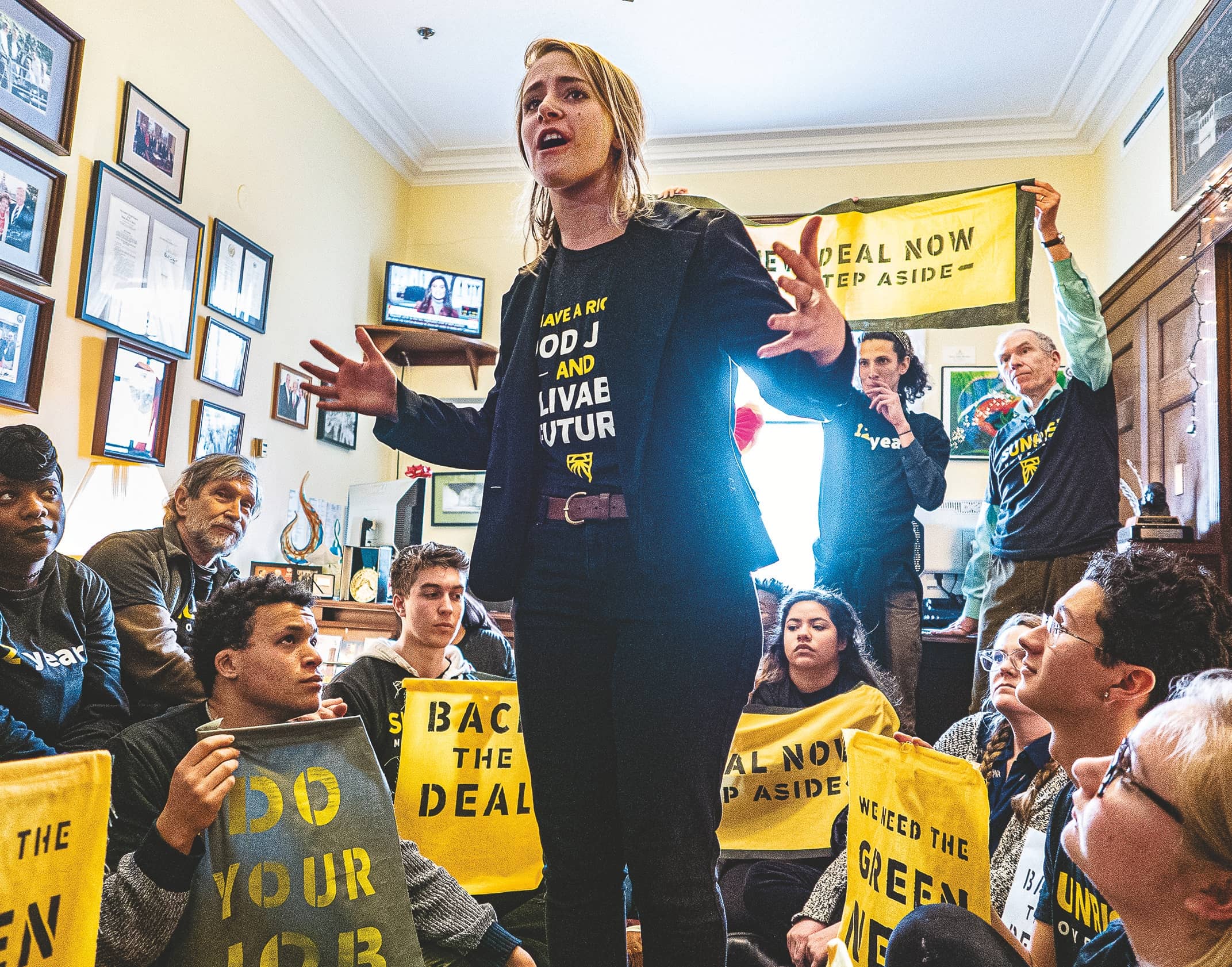 IN NOVEMBER 2018, I was enjoying a post-midterms vacation when I saw the news: Six days after Democrats had taken back the House, a scrappy group of 150 young people staged a sit-in at Majority Leader Nancy Pelosi’s office because they weren’t convinced by her pledge to push forward on climate change legislation. The hourslong protest might have been a forgotten blip in the news cycle—if progressive star Rep. Alexandria Ocasio-Cortez hadn’t stopped by. Her cameo set offa chain of events that meant, by the time I returned to DC, there were teenage and twentysomething activists everywhere in black T-shirts emblazoned with a symbol of a rising sun. They called themselves the Sunrise Movement, and they were calling for an ambitious bundle of climate legislation known as the Green New Deal.

At first, I was skeptical that these young people deserved the hype. They tended to slip into a dizzying patois of activism theory—during one phone call, I heard one Sunrise member cheerfully cite Martin Luther King Jr., Ella Baker, and civil rights academic Charles Payne in one breath. But over the course of the past year, I’ve noticed a sea change in the climate movement. The older white men who still lead the national environmental groups have started to give way to a much younger, more diverse, more in-your-face set of activists with their own set of leaders, like the teenage Swedish climate crusader Greta Thunberg.

This revitalized climate movement isn’t a fluke. Sunrise leaders say their secret sauce is a relatively new organizing strategy called Momentum, which teaches activists how to keep a movement growing instead of fizzling out after a few splashy protests. The Momentum approach has also influenced the Black Lives Matter movement and the immigration rights group Cosecha, as well as new climate groups like Extinction Rebellion, and some older ones like 350.org. For Sunrise, which claims 15,000 members in 200 hubs across the country, the strategy seems to be particularly effective.

Varshini Prakash, the 26-year-old executive director of Sunrise, thinks the Capitol Hill sit-in would have unfolded very differently without Momentum’s forward-thinking strategy. “When these big moments happen, like you sit in Nancy Pelosi’s office and there are 5,000 articles written about climate change in the next two days, what do you do with that moment?” she said. “Do you say, ‘Wow, that was awesome—let’s pack up and go home,’ or do you say, ‘How do we use this moment to drive thousands and thousands of people toward our organization and create a leadership pathway?’”

Momentum theory grew largely with the help of two brothers from Iowa, Mark and Paul Engler. A writer and a community organizer, respectively, the Englers were frustrated with social movements’ lack of staying power. In 2013, they began developing an approach based on the modern history of civil resistance, from Dr. King to Occupy Wall Street and the Arab Spring. “Many of the founders of Momentum, including me, have had the experience of living through a cycle of mass protest, with its exhilarating peaks, and then experiencing its failure or collapse,” Paul Engler told me. That inspired “a long process of trying to figure out what happened and analyzing how to do it better.”