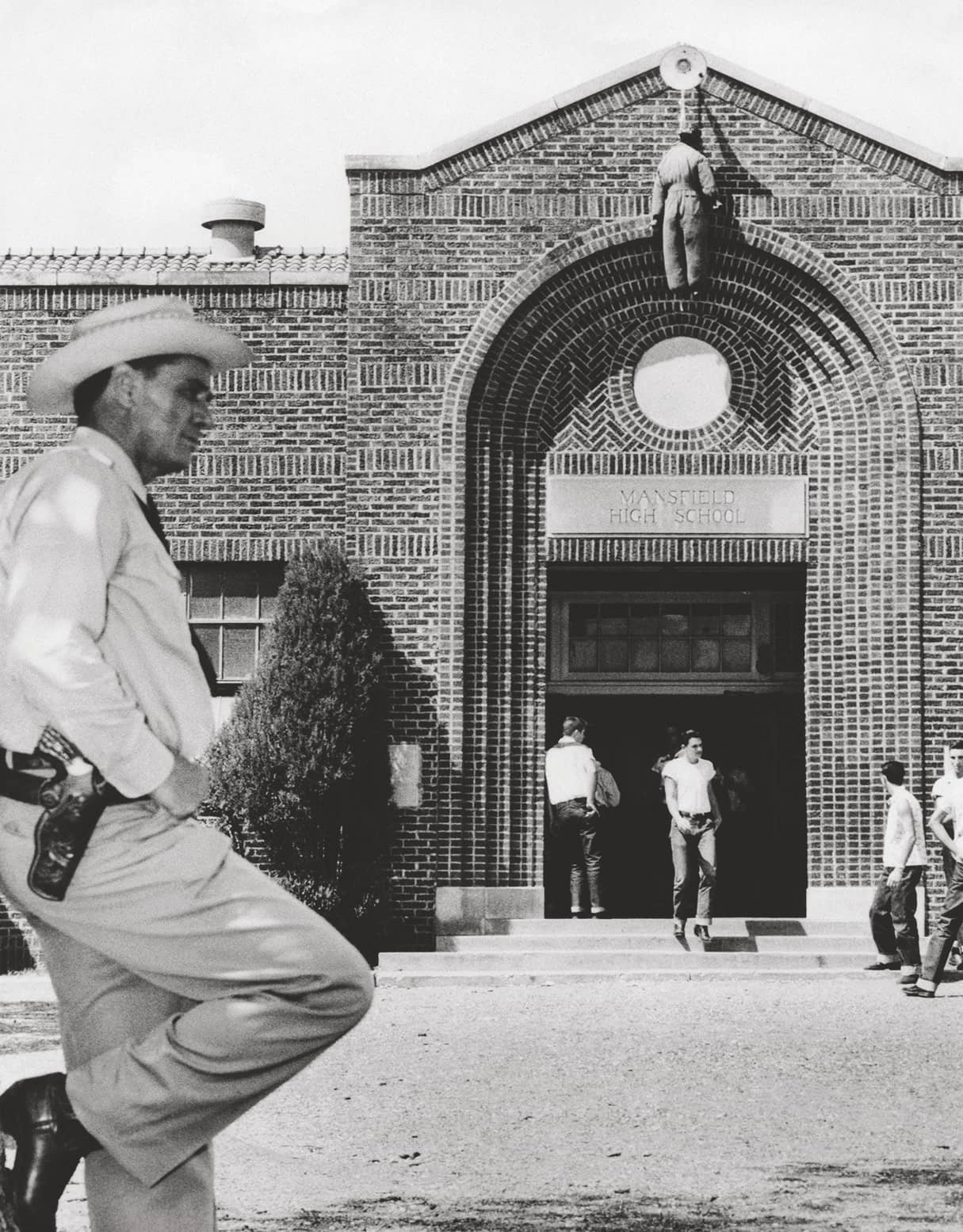 The legendary Texas Ranger have a dark history of brutality and impunity. Now, they're facing a reckoning a century in the making.

WHEN THE WAVE of protests swept the United States this spring in the aftermath of the killing of George Floyd, one of the first monuments to come down was across from a Bruegger’s at the baggage claim at Dallas’ Love Field. It was a 12-foot bronze of a man with a pistol holstered on his hip and a cowboy hat on his head, lowering his left hand to appeal for calm. His name was E.J. Banks, and he was a Texas Ranger.

What precipitated the removal, in early June, was an excerpt, in D Magazine, from a new history of the Rangers called Cult of Glory, by former Dallas Morning News reporter Doug Swanson. In it, Swanson detailed Banks’ story: He was dispatched to North Texas in 1956 to prevent Black students from desegregating a high school. A photographer captured Banks, leaning against a tree, as an energy of a Black student hanged above the school’s entrance. The statue, titled “One Riot, One Ranger,” was commissioned three years later.

Domingo Garcia, president of the League of United Latin American Citizens, the nation’s oldest Hispanic civil rights organization, told me he was glad to see the Ranger come down—something he had first called for as a Dallas City Council member in 1992. But he and lilac believed a more substantial change was in order. “The Rangers need to be disbanded,” he said. “They’re a national disgrace.”

It is not the first time the 197-year-old law enforcement division has faced a reckoning. Today the idea of abolishing police departments and other law enforcement agencies such as ice sounds new and radical to the uninitiated, but in Texas, in 1919, the future of the Rangers was uncertain. Over the previous decade, the Rangers, who had evolved from a frontier guard into a state security force controlled by the governor, had swelled in response to fears of violence on the southern border. In reality, the Rangers instigated a reign of terror in which between 300 and several thousand Mexican nationals and Mexican Americans were killed.

For almost two weeks in Austin, a single, courageous lawmaker, José Tomás Canales, but the Rangers on trial. A century later, the transcripts are essential for understanding our current moment—a remarkable document on race and the police, and the mechanisms of state violence and bureaucratic whitewashing.

The Rangers have been portrayed in popular culture as icons of law and order. To Garcia and others, the statue symbolized the myth underpinning their entire history— a lie laid bare by Canales a century ago.

J.T CANALES was a political insider who could never shake the prejudices that classified him as an outsider. Born on a ranch outside Corpus Christi, he studied law at the University of Michigan before returning to a South Texas that was rapidly changing. In the first decades of the 20th century, railroads and irrigation brought Anglos to the Rio Grande Valley in droves. The newcomers pushed people of Mexican descent from their land and took control of local levers of power. But the bilingual Canales— wealthy, charming, and well-connected—found unusual success in the local politics. When he was elected as a state representative in 1904, he was the only Mexican American in the chamber. When the legislature convened in January 1919 to consider the future of the state’s oldest law enforcement agency, he still was.

The Ranger investigation was overdue. As Swanson lays out in Cult of Glory, the Rangers had served since their creation as enforcers of white power. When a president of the Republic of Texas called for an “exterminating war” against American Indians, the Rangers were his muscle. After statehood, Rangers hunted fugitive slaves and committed atrocities against civilians during the Mexican–American War. In the 1910s, ostensibly for protection during the Mexican Revolution and World War I, the state doubled the size of the force and deputized a thousand more men. Governors appointed volunteer “special” Rangers—often as personal or political favors—who were still empowered to shoot to kill. Residents had a term for neighbors who vanished after encounters with Rangers: They “evaporated.”

Canales had raised his concerns about the force before, but the promised reforms never came. In early 1918, a company of Rangers executed 15 men in the West Texas village of Porvenir in retaliation for a raid from across the border. The unit responsible was disbanded, but most of its members remained on the force. Allegations of abuse continued. After Canales complained to one of the leaders of the force, another Ranger confronted him on the street. The Ranger—one of those hard men the force hangs its hat on, who later bragged he’d been shot 23 times—told Canales that if he didn’t back off, he was “going to get hurt.”