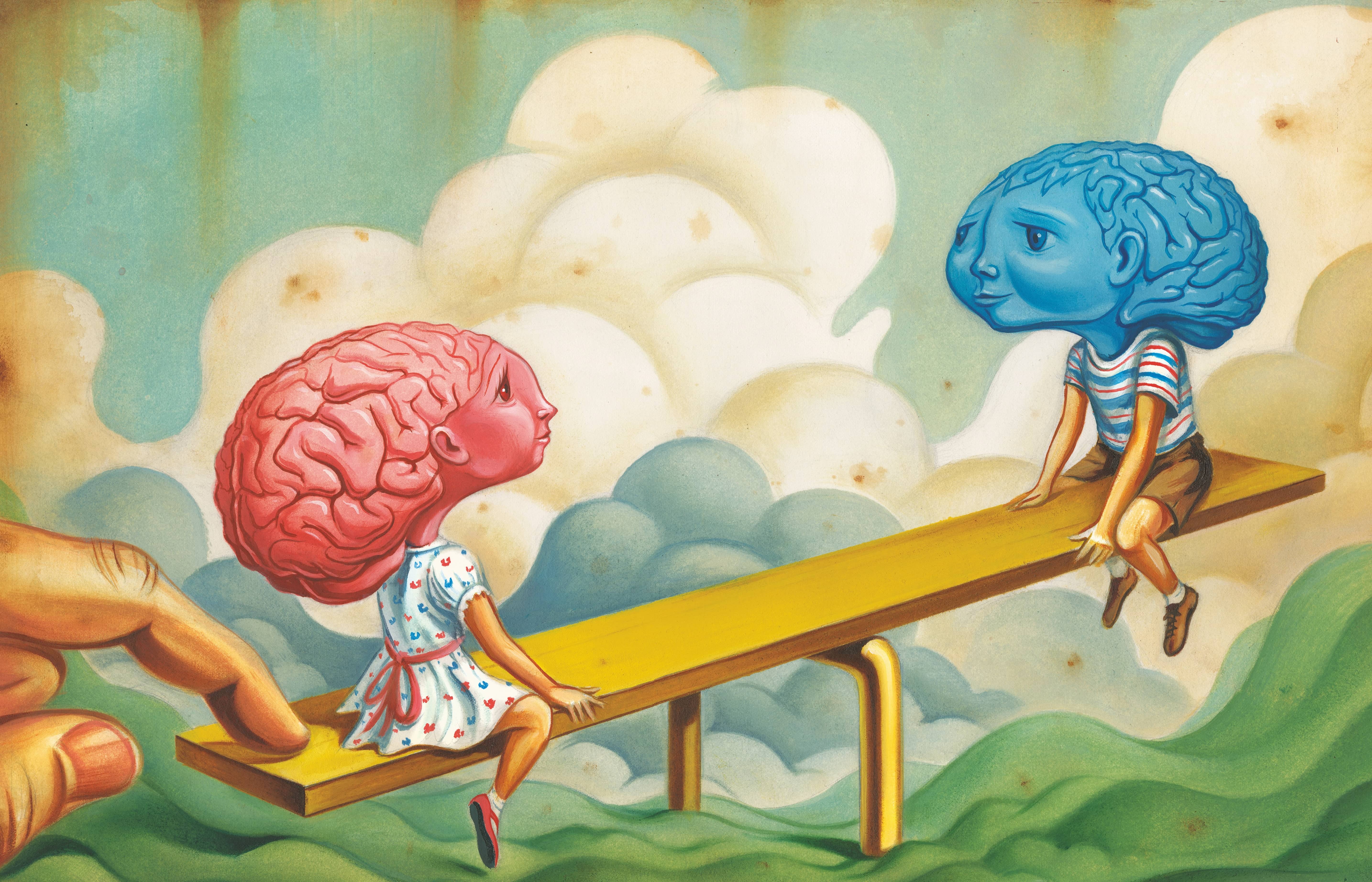 By insisting that boys' and girls' brains are wired differently, proponents of single-sex education are selling all kids short.

ON A CRISP fall morning in 2017, veteran science teacher Mary Bozenmayer and her colleagues filed into the cafeteria of their New Jersey middle school for an all-day professional development session. The speaker took the podium, smiled brightly, and explained that he was there to tell them how boys and girls think differently.

Bozenmayer was skeptical. Given her scientific training, she knew that most theories about sex-related brain differences had been debunked long ago. Still, she tried to keep an open mind as the trainer, who worked for an organization called the Gurian Institute, told the teachers that girls learn best by sitting quietly and following directions while boys require competition and physical activity to master difficult concepts. “Males can store trivia (like sports statistics) better than females, and for a longer period of time,” read a card he handed out. Another stated, “Boys take longer to process emotions than girls, making them generally emotionally fragile.” Modern classrooms, the trainer said, cater to girls’ learning style—and as a result, he concluded, girls are succeeding in school while boys are falling dangerously behind.

This didn’t sit right with Bozenmayer, so she raised her hand and asked, “If boys are struggling so much, then why are we still seeing women underrepresented in Congress, in Fortune 500 companies?” The trainer responded by repeating his talking points. “I felt my blood pressure going up,” Bozenmayer recalls. “I was like, this just seems too skewed.” Yet when she looked around the room, she saw many of her male and female colleagues nodding in agreement, diligently sifting through the cards and taking notes.

The idea that boys and girls have innate characteristics that cause them to learn differently has picked up momentum over the past decade. The Gurian Institute says it has trained 60,000 educators in 2,000 school districts—to the tune of as much as $10,000 per session. Another prominent advocate of sex-differentiated education, the psychologist Leonard Sax, offers a popular two-day workshop for schools on “the emerging science of male-female differences.” At the Boy Brains & Engagement Conference, hundreds of teachers rack up continuing education credits while hearing about boys’ and girls’ learning styles. “Scientists have discovered about 100 typical gender differences in the brain,” states its brochure.

These ideas have gained traction among policymakers. The No Child Left Behind legislation signed by President George W. Bush in 2002 encouraged single-sex classrooms. Though the Obama administration pushed back against that idea, state legislators have taken up the cause: Florida Gov. Rick Scott signed a law allowing “gender-specific classrooms” in 2014; California passed a similar law in 2017. The number of single-sex public schools has exploded over the last two decades, up from a handful in the early 2000s to a few hundred today.

Beneath the move to make schools more “gender-friendly” lurks the fear that our educational system is failing boys in particular. A suite of bestselling books about boys’ academic struggles has pointed to their lagging grades, test scores, and graduation rates. “The evidence that boys are falling behind has mounted,” New York Times columnist David Brooks wrote in 2012. “The case is closed.” In a 2015 Washington Post op-ed headlined “Why Schools Are Failing Our Boys,” one parent, a mother, wrote, “The lack of movement and rigid restrictions associated with modern schooling are killing my son’s soul.” Some writers have framed the so-called boy crisis as a consequence of feminism. In a 2017 National Review article titled “The Feminization of Everything Fails Our Boys,” conservative pundit David French decried “the feminized school, complete with its zero-tolerance, mortal fear of anything remotely martial, and its relentless emphasis on compassion and nurturing rather than exploration and adventure (unless the adventurer is a woman).”

The stereotype of girls as naturally industrious homework-doers and boys as misunderstood rebels is a convenient frame to explain some boys’ lackluster academic performance. Just one problem: Overwhelming evidence shows that our cultural expectations of gender play at least as much of a role as supposedly hardwired differences in how boys and girls learn. While some studies from a few years ago showed girls surpassing boys academically, more recent research suggests that these findings are far from universal: The gender gap in academic achievement varies enormously by race, class, and geographic location.

And even where girls do have an edge in school, the reason may not be biological: Cutting-edge neuroscience has cast doubt on the idea of consistent and meaningful brain differences between girls and boys, and education researchers have found that sex-differentiated teaching doesn’t guarantee academic progress. Rather, our preconceptions about how girls and boys learn and behave are influencing their school experiences and reinforcing gender stereotypes. And most troubling: Neurological research suggests that these stereotypes may actually be shaping students’ brains.

Bozenmayer took her concerns about her school’s training to her principal and his superiors—and when they didn’t take action, she made contact with Galen Sherwin, a senior attorney at the American Civil Liberties Union who heads its “Teach Kids, Not Stereotypes” campaign. The ACLU argues that separating boys and girls at school is almost always unfair—and in many cases, it may be illegal under Title IX, the federal law that prohibits sex-based discrimination in education. So far, the ACLU has challenged single-sex schooling in 15 states, resulting in the closure of 36 programs. After the ACLU contacted the New Jersey attorney general’s office for civil rights in 2018, Bozenmayer’s district discontinued the training.

Sherwin considers that a small victory. But new single-sex public schools keep cropping up, mostly in poor communities of color, where she worries that they reinforce not just insidious gender stereotypes but damaging racial ones as well. A 2017 Education Week report found that single-sex public schools are composed of a disproportionate number of students of color—about 90 percent, compared to roughly 50 percent nationwide. More than three-quarters of students at single-sex schools come from poor families, compared to about half nationwide.

For teachers struggling with discipline, overcrowded classrooms, and underfunded schools, the case for male and female learning differences can be persuasive. As Rebecca Bigler, a professor of psychology at the University of Texas, Austin, who studies gender-role development in children, observes, “It offers a simple solution to a really complex problem.” 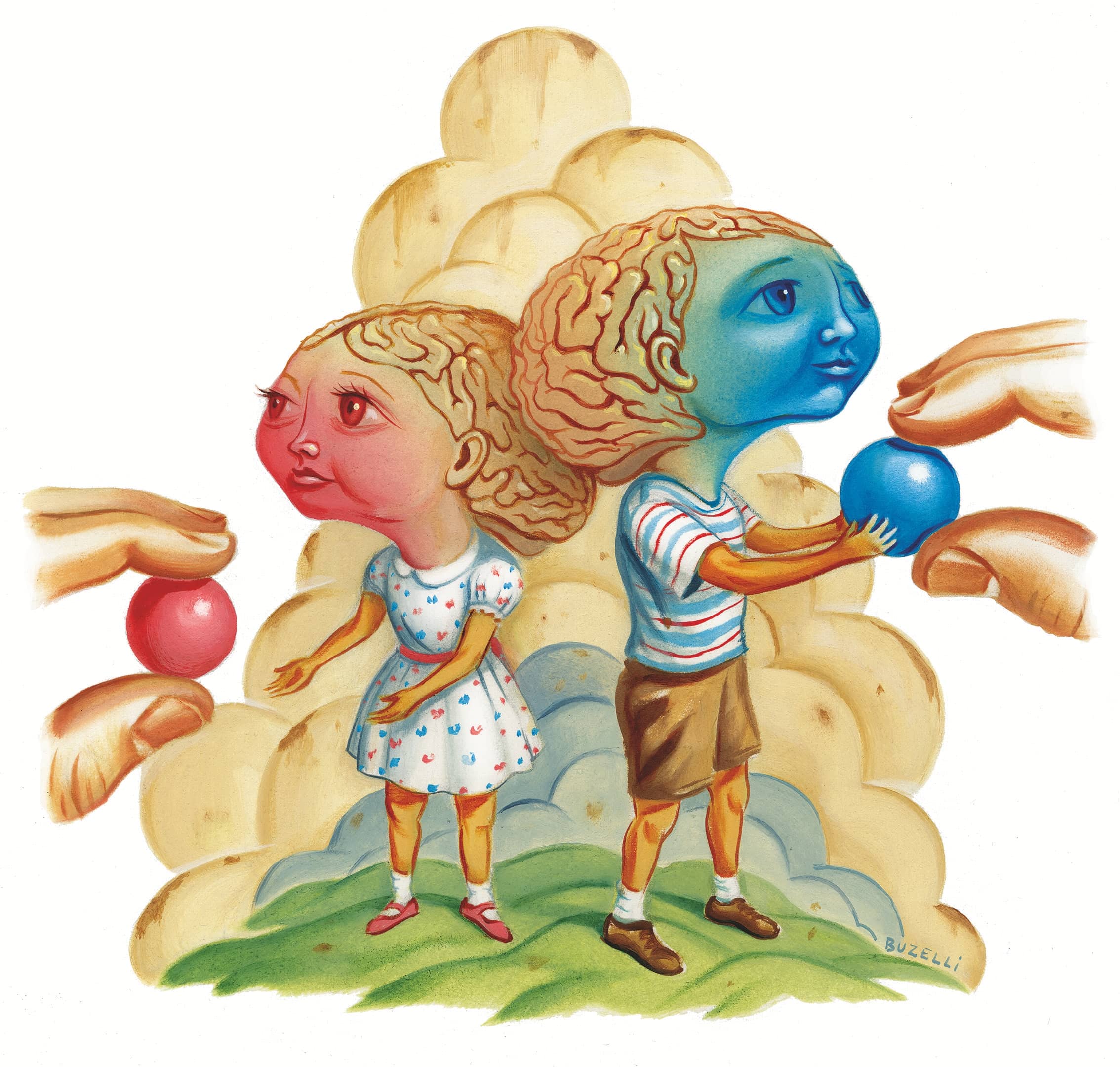 THE IDEA OF single-sex learning isn’t new, of course. It was once considered improper for girls and boys to learn together. When I attended an all-girls high school in the 1990s, it was thought that boys dominated classroom discussions and made girls feel self-conscious about being smart. But the driving philosophy of single-sex education that has emerged in this century is less focused on boosting girl power than saving boys.

In 2006, author and self-described “social philosopher” Michael Gurian published The Wonder of Boys, in which he argued that male brain structure, along with the dissolution of traditional societal structures, has made boys susceptible to “gang activity, sexual misconduct, and crime.” Critics hailed it as the male answer to Mary Pipher’s Reviving Ophe Lia, the 1994 bestseller about struggling teenage girls. The Wonder of Boys has sold more than 400,000 copies and has been translated into 17 languages. He’s written several other books about boys and two about girls. On his site, he claims to have “briefed” Congress about his work. In 1996, he founded the Gurian Institute, which helps school districts set up single-sex classrooms and has prompted some to found single-sex schools.

Gurian, who does not have degrees in education, psychology, or neuroscience, has elaborated on his “nature-based theory” of gender across more than two dozen books. In The Minds of Boys: Saving Our Sons From Falling Behind in School and Life, Gurian thunders against an educational system that caters to docile, well-behaved girls—and leaves rambunctious, competitive boys to act out in frustration. “Parents bringing their sons to their first days of preschool will increasingly find that at least one of these sons could eventually face an educational crisis,” he writes.

To address this crisis, Gurian says, we must design classrooms and teaching strategies specifically for boys. This should start in preschool, where instead of forbidding violence, teachers should practice “aggression nurturance,” allowing boys to hit and kick each other instead of using their words. “Given the hormonal and neural makeup of males,” he writes, “it’s often the case for boys (and men) that aggressive gestures are as nurturing as words, as bonding as hugs.” (Sax, the psychologist, echoes these ideas, recommending spanking to discipline boys but not girls.) Gurian suggests a suite of strategies that he claims will enhance boys’ learning at all levels: Teachers shouldn’t look boys in the eye—male brains get stressed out by direct eye contact. Lights should be kept bright since low lights can make boys “act out.” To tempt boys to read, he suggests offering instructional manuals, business books, and comics rather than To Kill a Mockingbird or Romeo and Juliet.