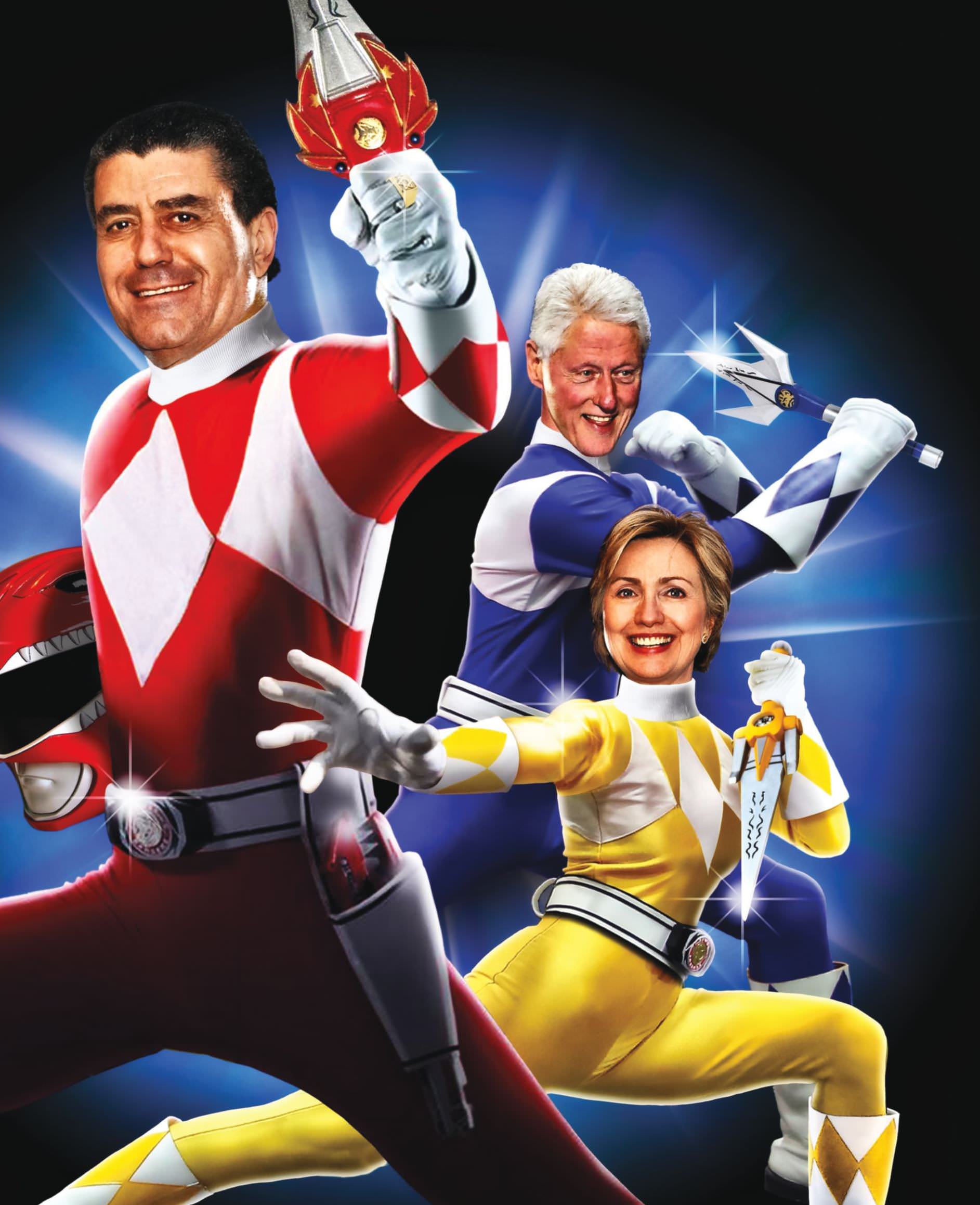 What does Hillary’s top political benefactor want from a Clinton administration?.

ON AUGUST 22, a convoy of blacked out Suburbans, flanked by police escorts, sped west along Sunset Boulevard and then headed north into the Hollywood Hills. The motorcade finally pulled up to the gated entrance of Beverly Park, an exclusive enclave that is home to an array of famous actors, rockers, and other Los Angeles A-listers. Hillary Clinton’s destination that evening was the palatial compound of Univision chairman Haim Saban, a billionaire most famous for creating the Mighty Morphin Power Rangers. Saban’s sprawling mansion was built in the style of a French country manor, and the meticulously tended grounds, in which he took special pride, were modeled on the gardens of Versailles.

“Well, the latest one they have on me is that I’m dying,” she said, referring to the elaborate conspiracy theories about her health ginned up by conservative media. “That’s a new one.” The price of admission to the Sabans’ fundraiser—their second for Clinton during the 2016 race— was $100,000 per couple. After a few hours of mingling, Clinton had raised more than $5 million—one of the most lucrative hauls of her campaign.

Saban, who is solidly built with slicked back wavy black hair, is worth an estimated $3.5 billion, earning him the 453rd spot on Forbes’ ranking of the world’s richest people. The 72-year-old holds dual Israeli-American citizenship, and his office—which occupies the top floor of a 26-story tower in LA’s Century City—is a testament to his divided loyalties. An Israeli flag and an American flag adorn his conference room, next to photographs of Abraham Lincoln, David Ben-Gurion, Theodor Herzl, and John F. Kennedy. A framed Golda Meir quote in the lobby (“We will only have peace with the Arabs when they love their children more than they hate us”) greets visitors. There’s also a mock version of Monopoly called Haimopoly on display. The play money bears the Power Rangers logo, and the properties on the board include some of Saban’s current and former business interests—the Paul Frank designer brand, TV network Univision, the Israeli telecommunications company Bezeq.

Saban has the self-made mogul’s way of both downplaying and reminding you of his clout. In one breath he’ll name-drop “Angela” (German Chancellor Angela Merkel) or “Bibi” (Israeli Prime Minister Benjamin Netanyahu); in the next he’ll describe himself as a mere “former cartoon schlepper” or “just a guy.”

But there is one subject on which Saban does not hold back: his relationship with Bill and Hillary Clinton. No single political patron has done more for the Clintons over the span of their careers. In the past 20 years, Saban and his wife have donated $2.4 million to the Clintons’ various campaigns and at least $15 million to the Clinton Foundation, where Cheryl Saban serves as a board member. Haim Saban prides himself on his top-giver status: “If I’m not No. 1, I’m going to cut my balls off,” he once remarked on the eve of a Hillary fundraiser. The Sabans have given more than $10 million to Priorities USA, making them the second-largest funders of the pro-Hillary super-pac. In the lead-up to the 2016 presidential campaign, he vowed to spend “whatever it takes” to elect her.

The ties go beyond money. The Clintons have flown on the Sabans’ private jet, stayed at their LA home, and vacationed at their Acapulco estate. The two families watched the 2004 election results together at the Clintons’ home, and Bill Clinton gave the final toast at one of Cheryl Saban’s birthday parties. Haim Saban is chummy enough with Hillary that he felt comfortable telling her that she sounded too shrill on the stump. “Why are you shouting all the time?” he says he told her. “It’s drilling a hole in my head.”

Like any political benefactor, Saban has an agenda. Unlike many, however, he is startlingly transparent about what he wants and how he intends to get it. “I’m a one-issue guy, and my issue is Israel,” he has said. A supporter of the late Yitzhak Rabin, the Israeli Labor Party leader and pro-peace prime minister, Saban has drifted rightward in recent years. “In general, he’s taking a harder line,” says former US Ambassador to Israel Martin Indyk. Saban says he still believes in a two-state solution, but his all-consuming concern is defending Israel and fortifying its relationship with the United States. “For me,” he said several years ago, “bringing the American president closer to the people of Israel is a life goal.”

One year at the Saban Forum, an annual conference featuring top officials and public figures from the US and Israel (with the odd Arab leader), the mogul outlined his three-pronged approach for influencing American politics: fund political campaigns, bankroll think tanks, and control the media. In addition to the Saban Forum, he funded a Brookings Institution research center focused on US-Israeli relations. He has tried for years to buy media outlets in the United States and Israel; it wasn’t a profit he was after, per se, but “a return with influence,” as he once told a journalist.

When it comes to the Clintons, Saban has already seen a healthy return on his investment, in the form of access to top US and foreign officials; he’s also received timely help from them with his global business dealings. But the election of Hillary Clinton would give Saban more juice than ever before—and there is no question he would bring that clout to bear on his top issue, Israel, and on rebuilding US-Israeli relations after the low points of the last eight years and the public schism between President Barack Obama and Netanyahu.

For Clinton, her relationship with Saban gives her a back channel to Israeli leaders and a proxy who is beloved in Israel. (“Our rich uncle,” an Israeli TV host once called Saban.) But it also comes with complications. In contrast to Clinton’s call for the rich to pay their fair share in taxes, Saban routes his business ventures through the Cayman Islands and other tax shelters; his tax avoidance practices were once scrutinized by a Senate committee. His hardline tone on the Middle East—defending Israel at all costs, calling for tighter screening of Muslim immigrants (a comment he later walked back), and saying of Iranian fundamentalists that he would “bomb the living daylights out of those sons of bitches”—is out of sync with many Democratic voters. Last year, he even teamed up on pro-Israel causes with Republican mega donor Sheldon Adelson, who says the Palestinians are “an invented people.”

“When it comes to Israel, we’re absolutely on the same page,” Saban told Israel’s Channel 2 in June with Adelson at his side. “Our interest is to take care of Israel’s interest in the United States. Period. Over and out.”

HOLLYWOOD POWER BROKERS tend to come in three varieties: the company men and women who ascend the corporate ladder until they reach the C-suite; the heirs to movie- or music-making dynasties like Casey Wasserman, the grandson of the late MCA chief and Democratic donor Lew Wasserman; and the scrappy comers who—through ruthlessness, grit, or a combination—claw their way to an empire.

Saban is in the third category. He was born in Egypt in 1944. His father worked in a toy shop and his mother was a seamstress. Animosity toward Jews in the run-up to the Suez War in 1956 forced the Saban family— like many Jewish Egyptian refugees—to resettle in Israel, where they found an apartment in a rough neighborhood in Tel Aviv, sharing a communal bathroom “with a hooker and her pimp,” Saban likes to say.

As a teenager, Saban enlisted with the Israel Defense Forces and served during the Six-Day War in 1967 and the Yom Kippur War in 1973. While in the IDF, Saban discovered a knack for concert promoting and was on his way to earning a small fortune when the Yom Kippur War broke out. He nearly went bankrupt after fronting hundreds of thousands of dollars to bring 40 Japanese harpists to Israel—only for their concerts to be canceled at the war’s onset.