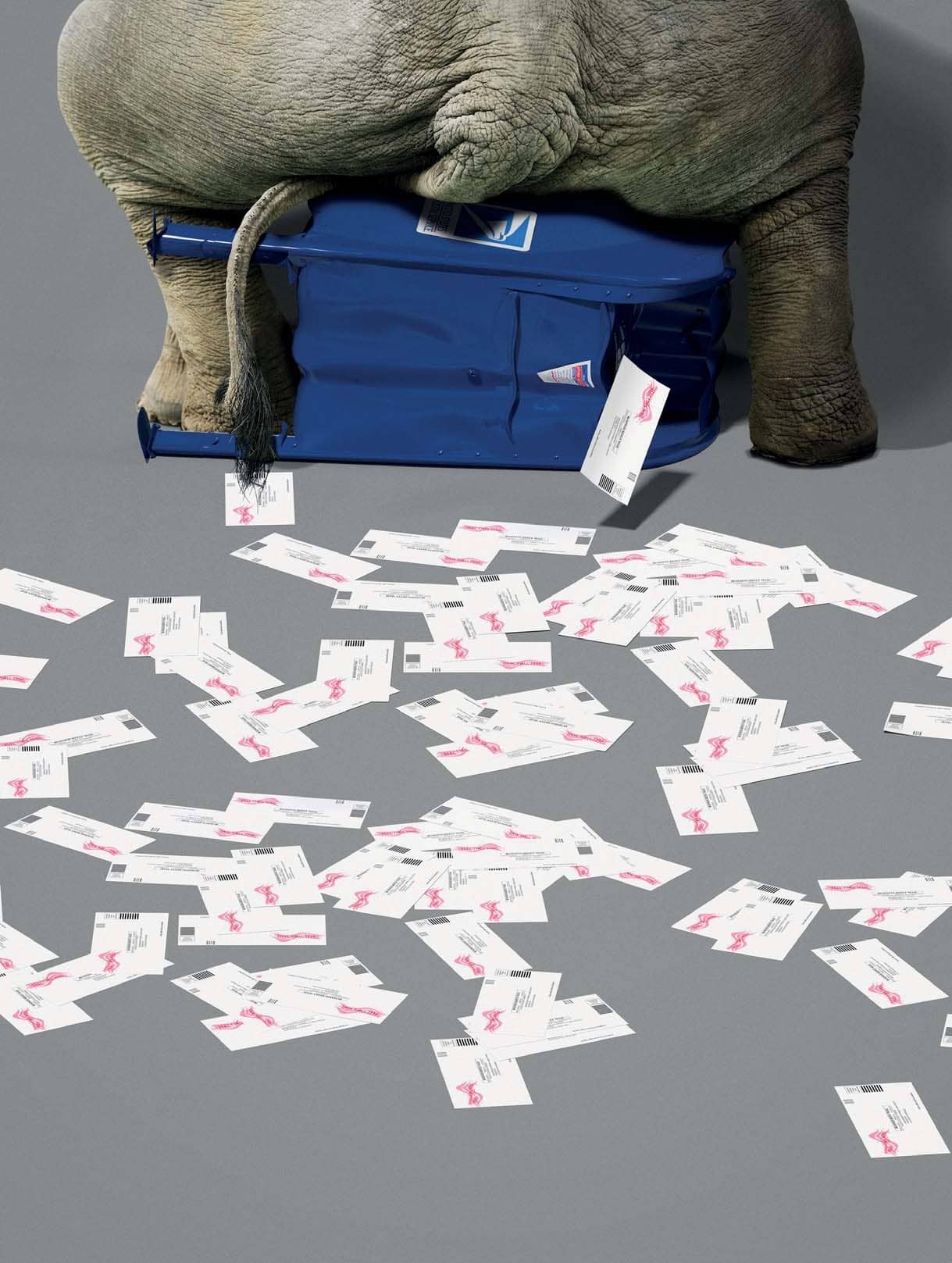 The pandemic gives the gop a whole new way to squash the vote.

H.DREW GALLOWAY executive director of move Texas spends his life trying to register young voters. Typically, in the spring of an election year, Galloway would be overseeing a staff of about four dozen who, before classes end for the summer, register newly eligible voters on 55 college campuses and at dozens of high schools.

Last year, move Texas signed up more than 25,000 new voters. It reached nearly 8,000 more this year before the state’s March 3 presidential primary. But then the coronavirus outbreak scattered students, and move Texas, like every other political group, suspended in-person registration drives. “We’ve gone from registering 2,000 people a week to registering maybe 100,” Galloway told me in April. “Voter registration is decimated in Texas.”

Even before the pandemic, Texas was a hard place to register. As of May, it was one of 10 states with no way to do so online. Anyone who wants to sign up voters must be deputized by each county they work in, every two years. Texas has an estimated 5.5 million unregistered but eligible voters—more people than the individual populations of 28 other states. The majority of them, according to the Texas Democratic Party, are young, people of color, or both, who would likely favor Democrats if they voted. Luke Warford, who directs the party’s efforts to expand voting, told me that Texas Democrats had hoped to see 2 million new people register this year as part of its push to tip the state blue. “We had plans to run the largest statewide voter registration program in history,” he said. “Introduce a pandemic and that makes everything you were planning to do in person quite a bit more difficult.”

Even if new voters succeed in registering, without changes to the existing system they’ll face unequal access to mail-in ballots. Texas limits mail-in voting for those under 65 to people who are out of town during the election, in jail, or have a “sickness or physical condition” that prevents them from going to the polls. Meanwhile, any voter 65 or older—the strongest age demographic for Donald Trump—can request an absentee ballot with no questions asked. In April, a state judge ruled that people afraid of contracting the coronavirus while voting had a legitimate reason to get an absentee ballot. Texas’ Republican attorney general has opposed the ruling, claiming that “fear of contracting COVID-19” is “an emotional condition and not a physical” one, and has raised the prospect of “criminal sanctions” for groups like move Texas that help voters under 65 obtain mail-in ballots. While appeals are underway and federal judges are examining the issue, the question could be decided by the state’s all-Republican Supreme Court.

What’s happened in Texas is happening nationwide: The coronavirus has heightened the already considerable obstacles blocking citizens from exercising their right to vote. In the last decade, Republicans have enacted new voting restrictions in 25 states. The Supreme Court has gutted the Voting Rights Act, unleashing new efforts in states with long histories of voting discrimination to make it harder for voters of color to cast ballots. And then there are the Russians, who attempted to access election infrastructure in all 50 states in 2016 and could try again. “What you’ve done with coronavirus,” said Marc Elias, the leading Democratic voting rights lawyer, “is you’ve added one more huge stressor to a system that was already at the breaking point.” The risk of mass voter disenfranchisement is greater in 2020 than at any time since the era before the abolition of poll taxes and literacy tests in the 1960s.

Voter ID laws are far more discriminatory when the Department of Motor Vehicle offices are shuttered. Purges are more harmful when removed voters cannot easily reregister. Limited polling places and five-hour waits are especially pernicious under the threat of viral infection. And voter registration and traditional get-out-the-vote efforts have stalled. “Souls to the Polls” drives led by Black churches have been put on hold. States have delayed primaries and severely reduced or wholly eliminated in-person voting. Few are prepared to handle a surge of mail-in ballots in November. Democrats worry that COVID-19 could be weaponized to the GOP's advantage, locking in an older and whiter electorate that stems the impact of demographic change.

The numbers are startling: In Kentucky, for example, where Senate Majority Leader Mitch McConnell is up for reelection, just 504 people registered in March compared to 7,256 the month before. In key states like Texas, Georgia, North Carolina, and Virginia, the number of new voters who registered in March was half or less than it was during the same time period in 2016.

“Coronavirus has added this additional layer of voter suppression to everything. The barriers that those laws put up are even higher now,” said Galloway. “That’s directly going to affect communities of color, low-income communities, young people.”