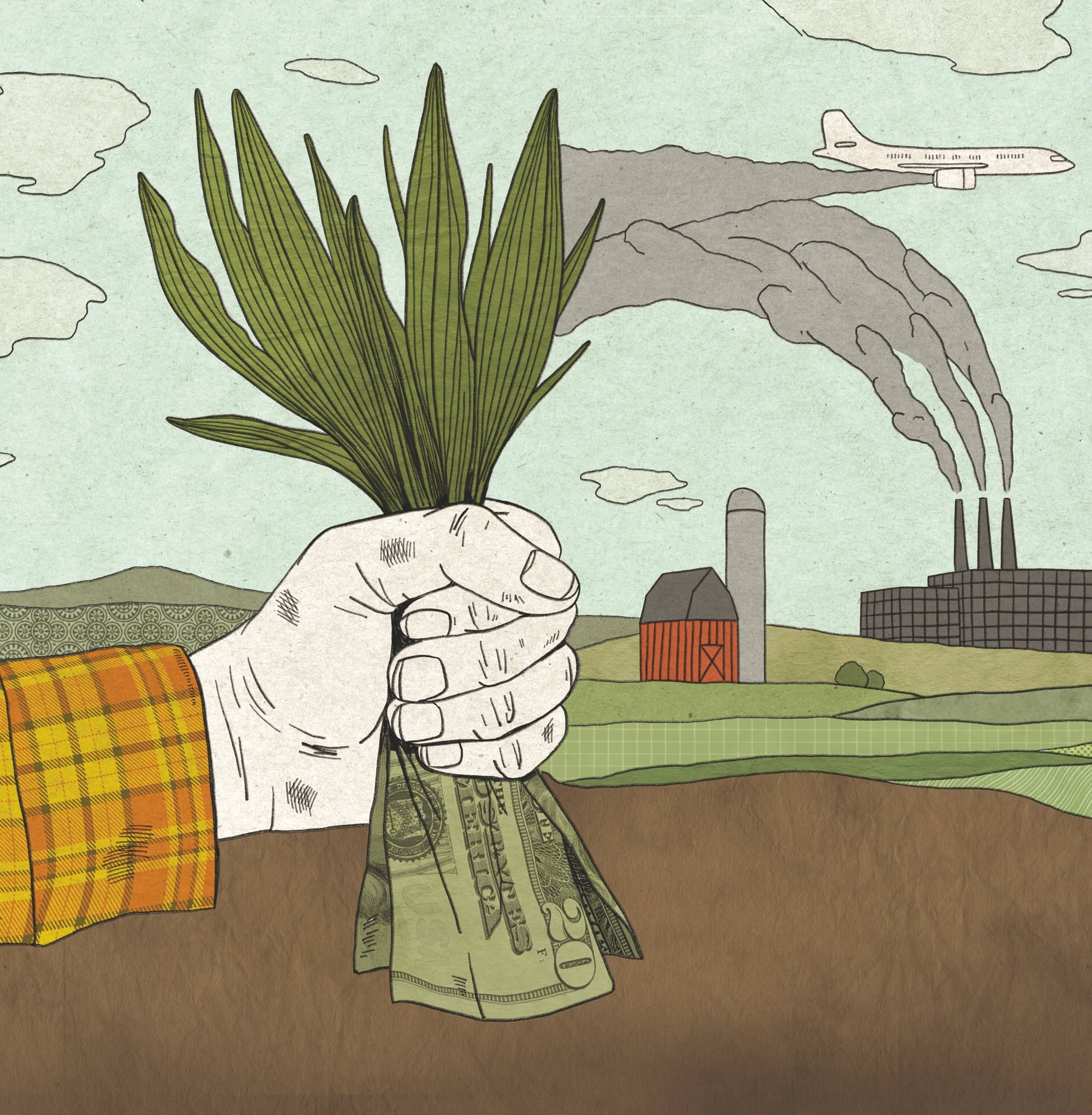 An ambitious startup wants to pay farmers to store carbon. Is this the answer to climate change or just an illusion?

The temperature has been dropping all morning, so by the time we reach Adam Chappell’s cornfield at the edge of the tiny town of Cotton Plant, Arkansas, it’s in the 30s. Cold for the Delta. Heavy clouds press down on a border of maple and oak trees. I follow Chappell into the field, where we pause amid piles of corn husks and a few abandoned mustard-color cobs. It’s December, and harvest is almost over, yet neat rows of oat grass, fernlike vetch, and radish leaves poke up through the detritus in a medley of growth and decay.

“I bet you my earthworms are down about a foot,” Chappell says through a coppery beard, his large hands hunting for warmth in the pockets of his sweatshirt. “You could probably dig ’em up yesterday, but right now it’s too cold. This place is covered in earthworms. And it didn’t used to be.”

Chappell’s 100-acre field once looked like his cousin’s across the road, an empty stretch of tilled dirt about as appealing to an earthworm as a parking lot. He used to clear his fields after fall harvest, leaving them barren all winter. But about a decade ago, after his farm’s battle with herbicide-resistant pigweed left him and his brother on the brink of bankruptcy, the fourth-generation farmer had a revelation after a late night of scouring YouTube. He phased out the herbicides and instead left the stems and stalks in the field and scattered rye seeds among them to grow through the winter.

His neighbors called it “farming trashy,” implying he was too lazy to clean up his field before planting it in the spring. Yet Chappell observed how the rye fended off the pigweed and shielded his soil so microbes could multiply underneath the protective canopy. He soon shifted almost all his land from conventional to regenerative farming, an approach that focuses on replenishing the soil’s nutrients without relying on synthetic and mined fertilizers.

Chappell says his yields haven’t changed much but he now makes more profit on every acre because he spends less on equipment, water, herbicides, and synthetic fertilizer. This season, he purchased 75 cows to munch down the oat grass and vetch and fertilize the soil before he plants it with cotton. Ten years into his regenerative experiment, the switch has reinvigorated his farm and saved him from financial ruin.

What he didn’t expect is how these tweaks would become the center of a privately funded, tech-amped venture to rescue the American agriculture industry and slow climate change in one fell swoop. Standing next to Chappell today are four representatives from Indigo Agriculture, a sizable tech startup that’s betting it can boost his profits by paying him to draw carbon dioxide out of the air and store it in the ground.

Scientists estimate the earth’s soil holds two to three times more carbon than the entire atmosphere. That’s a good thing, because cars, planes, factories, and farms churn out CO2 at astounding rates. If farmers could coax their fields to suck up more of the gas and deposit it underground in the form of organic carbon, it could go a long way toward mitigating greenhouse gas emissions. The benefits don’t stop there: Increasing soil’s carbon content also protects against erosion and increases biodiversity.

The idea of carbon farming is gaining traction. Many Democratic presidential candidates endorsed the concept; in his Green New Deal manifesto, Sen. Bernie Sanders proposes funding farmers to the tune of $160 billion “for the soil health improvements they make and for the carbon they sequester.” As part of the 2015 United Nations climate change conference, the French government launched an initiative to encourage countries to increase the carbon sequestered in their soil by 0.4 percent a year. In February, Rep. Chellie Pingree (D-Maine) introduced the Agriculture Resilience Act, which would immediately sign the United States on to the French plan and take other steps to restore eroded soil.

As the US government dithers, the private sector is springing into action. Last June, Indigo announced its plan to sink a teraton (1 trillion metric tons) of carbon dioxide into cropland around the world. Farmers who tend at least 300 acres and were enrolled in Indigo’s carbon marketplace by the end of last year would be guaranteed $15 for every metric ton of carbon dioxide they capture. Companies hoping to offset emissions associated with activities like business travel, energy production, and data storage—or at least seeking a greener image—will be able to purchase credits on Indigo’s carbon exchange for a yet-to-be determined price.

It’s a bold scheme. And it may be impossible. Some experts believe the soil will never absorb as much carbon as Indigo claims. And some doubt a carbon marketplace can gain enough traders to keep the price of the credits high enough to inspire farmers to change their ways. But Indigo— armed with some of the country’s leading soil experts, agribusiness consultants, and biotech veterans—is forging ahead. Paying farmers to switch to regenerative agriculture “is the most optimistic thing I know about in regard to climate change,” says David Perry, the company’s CEO, and it has the possibility “to fundamentally change farming for the better.”

When Indigo’s representatives caught wind of Chappell’s experiment in regenerative farming at the No-Till on the Plains Winter Conference in early 2019, they invited him to meet with their team in Memphis. Later that year, Chappell signed up to participate in the company’s nascent carbon exchange.

More than 5,000 farmers have joined him so far, Perry estimates. One of them is Ben Riensche, who grows corn and soybeans on 18,000 acres near Jesup, Iowa. He had watched market consolidation and industrialization gnaw at the profits of his family’s fifth-generation farm: There was always a new pesticide or fungicide that could only be paired with an endless stream of patented seeds. “I realized any time a new technology was offered, it would never make me more money,” he tells me. “The more I listened to what Indigo had to say, their mission to disrupt agriculture started making a lot of sense to me.”

Riensche is not the only farmer desperate for a new way of doing business. Growers the nation over face an uncertain future as crop prices have sagged, unpredictable weather disasters have surged, and retaliatory tariffs from President Trump’s trade wars have sent ag markets into chaos.