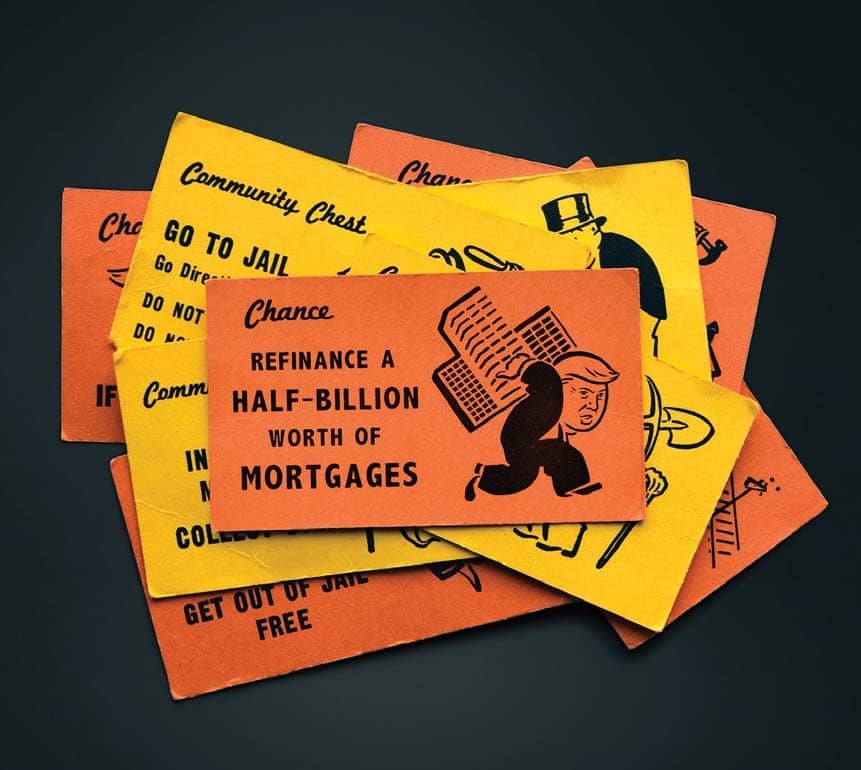 Donald Trump has nearly $500 million in loans coming due. They may be his biggest conflict of interest yet.

WIN OR LOSE in November, one thing won’t change for Donald Trump: Over the next few years, his company must settle a series of whopping debts. Before the end of a theoretical second term, his company will have to refinance—or, in a far less likely scenario, pay off—nearly a half-billion dollars in loans linked to some of his most prized assets, including Trump Tower. These debts are maturing at a perilous moment for Trump, whose hotels and resorts have been plagued by declining revenues. And that was before the coronavirus pandemic pummeled the hospitality industry in general and the Trump Organization in particular, forcing the full or partial closure of most of its hotel and resort properties.

On financial disclosure forms, Trump has reported holding 14 loans on 12 properties. At least six of those loans, representing about $479 million in debt, are due over the next four years. Some are guaranteed by Trump himself, meaning a creditor could come after his personal—not corporate— assets if he defaults. If he holds onto the White House, the refinancing of these debts could take his conflicts of interest to absurd new heights. How will the public know if these deals are on the up and up or whether Trump is receiving sweetheart terms from a bank that wants an in with the president? And what might a lender desire in return for helping Trump out of a financial jam?

Trump’s biggest creditor is Deutsche Bank, which in the late 1990s took a gamble on the real estate developer whose history of corporate bankruptcies made him untouchable by most other lenders. Although Trump and the Frankfurt-based bank pulled off several profitable deals, eventually Deutsche’s commercial lending division learned the hard way one reason why other banks considered him persona non grata: If pushed by his creditors on payments, Trump shoves back. In 2008, after he defaulted on a loan for his Chicago hotel and condo development, he filed a multibillion-dollar suit accusing Deutsche Bank and others of contributing to the recent financial meltdown, which he blamed for his inability to repay the loan.

Nevertheless, Deutsche’s private banking division, which caters to wealthy clientele, continued to lend to Trump, giving him $125 million, spread over two loans, to finance the purchase and renovation of his Doral golf resort in 2012. Both are floating rate loans, meaning the interest rate fluctuates based on market conditions, which lending experts say usually indicates they are interest-only loans. If so, Trump probably hasn’t paid down much if any of the principal and will owe something close to the whole $125 million when the loans come due in 2023.