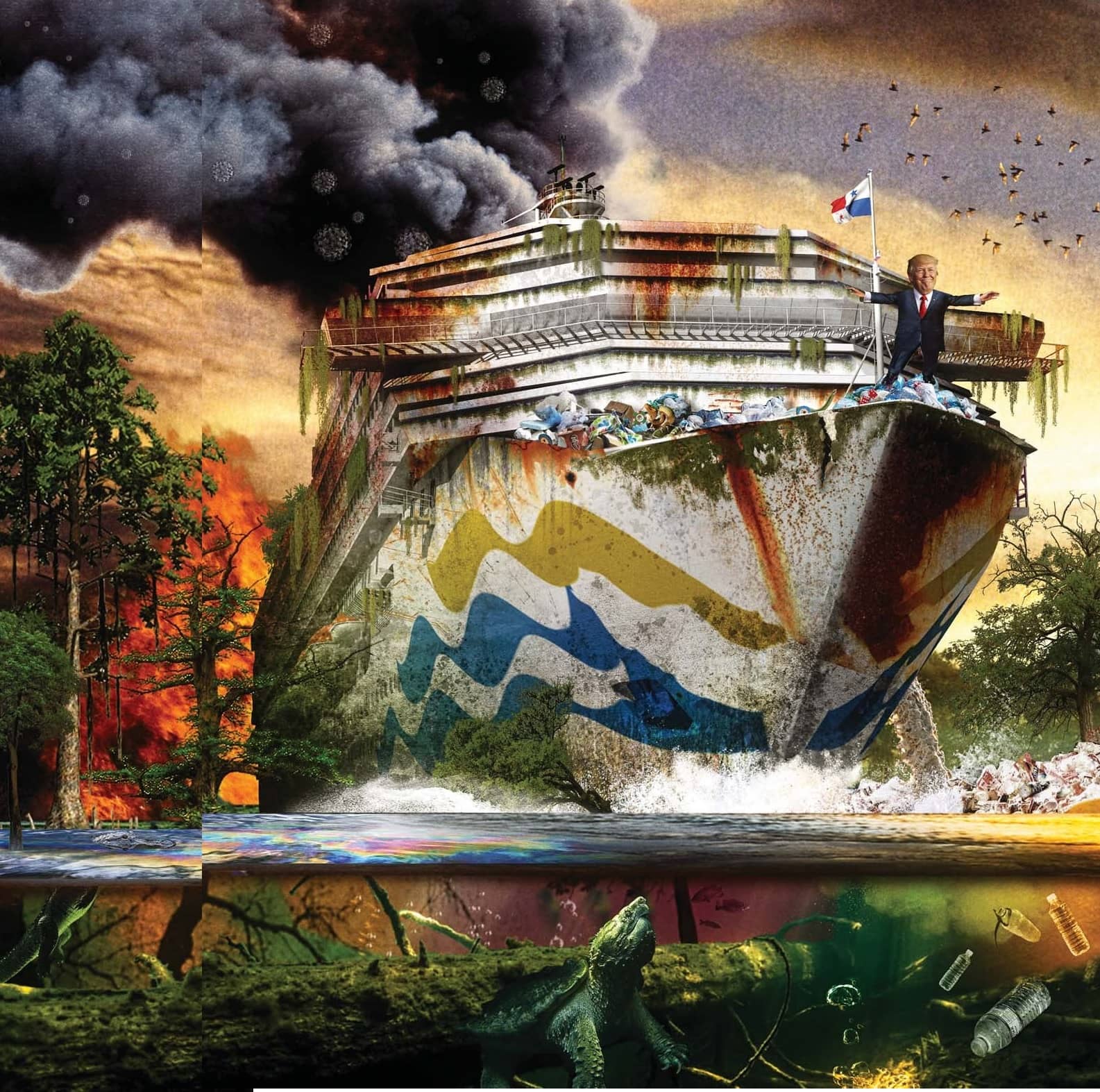 IF DONALD TRUMP could build a city from scratch, it would have a casino and a golf course and all the cheeseburgers you could eat. The city’s residents would be old, with money to spend and nothing but free time. The workers would be poor, foreign, and always on the clock. They would literally live beneath you. There would be doctors, but not very many, and there would be cops, sort of, but who exactly they were there to protect and serve would remain ambiguous. There would be no proper government to speak of. The city and its services would be run by a corporation, and you would sign away your rights to a billionaire in his 70s with a tan and bad hair, in exchange for a promise of a good time—art auctions, live music, waterfalls of champagne. The city would pay no taxes but avail itself of the services funded by those who do.

It would look, in other words, a lot like the Carnival Corporation’s 18story, 952-foot-long Diamond Princess as it entered Yokohama Bay in early February after a voyage through Southeast Asia for the Chinese New Year. Some people would find this city tacky. But it would be an altogether pleasant place for many people, much of the time. However, you would not want to be there during a pandemic.

As the cruise approached the port, the coronavirus was confined almost entirely to the Chinese city of Wuhan. Trump’s top public health concern was vaping. But on February 1, a passenger who had disembarked from the Diamond Princess tested positive for the virus. Three days later, passengers quarantined. While customers took their meals in their cabins, the vessel’s crew—more than 1,000 people from 48 countries—continued to go about their work. The number of cases on board would ultimately grow to 712, and 14 people would die. The ship, flying the flag of the United Kingdom and owned by a company—registered in Panama— that’s chaired by one of the richest men in Miami, saw the first major outbreak of COVID-19 outside of Wuhan.

The pandemic has penetrated nearly every corner of the globe. It has burned through nursing homes and choir practices. It has preyed on the elderly and the immunocompromised, people without access to reliable health care, and the young and perfectly healthy who never saw it coming. It’s killed more than 100,000 people in the United States in big cities and small towns. But for several weeks, before life as we know it shut down, you could turn on CNN and watch your own dismal future, adrift at sea.

After the Diamond Princess went into lockdown, the pattern played out on dozens of other cruise ships—sometimes weeks after it was clear that these vessels were sitting ducks. The Costa Luminosa (owned by Carnival subsidiary Costa Cruises) was waylaid off of France. The Grand Princess (owned by Princess Cruises—also Carnival) detoured to Oakland. The Zaandam (part of Holland America, a.k.a. Carnival) floated aimlessly for days while Florida’s governor debated whether he would accept its passengers.

Cruise ships are uniquely vulnerable when something goes awry—be it an outbreak, a navigation error, or a fire that knocks out the power system and fills the decks with raw sewage (google it). But the industry’s explosive growth and skyrocketing profits over the last 50 years have been driven, in part, by the freedom to circumvent health, labor, and safety requirements that bind companies back onshore. The industry, typified by Carnival’s billionaire chair, Micky Arison, has spent decades smoothing over bad experiences with booze and vouchers, insulating itself from the obligations of corporate citizenship in a maze of contracts and loopholes, and cultivating allies in Washington with free vacations and campaign cash. Long before the pandemic, cruise lines glided over sexual assaults, deaths, outbreaks, illegal dumping, and complaints of worker exploitation while hardly deviating from their course.

The pandemic put that steel hull of invincibility to the test, placing Carnival and the other giants of the industry in the crosshairs of government watchdogs in multiple countries. The Centers for Disease Control and Prevention scolded cruise companies for their slow response. Australia launched an investigation into Carnival’s handling of the COVID-19- afflicted Ruby Princess. Lawsuits piled up. Congress hinted at hearings. Decadent, tax-avoiding, gas-guzzling, low-wage—the industry might have been headed for reckoning in a different political environment. But the White House struck a different note. Trump treated the human victims of the virus with detachment, rarely acknowledging the toll it was taking on American families, and treating stranded passengers as little more than a nuisance that unfairly marred his sterling record. But in Carnival, he seemed to find a victim he could empathize with.

THE CRUISE INDUSTRY as we know it— the round-trip voyage to nowhere, the booze, the buffets, the Apprenticethemed group packages—began in the early 1970s, when an immigrant from Israel got a good deal on a boat. The age of air travel was making big ocean liners obsolete, and Ted Arison, a second-generation shipping magnate, was fishing around Miami for the next big thing. With a businessman from Oslo, he co-founded what is now Norwegian Cruise Line, but they soon fell out. On the way out the door, Arison used the company funds to purchase a secondhand ship for himself. The vessel was called the Empress of Canada, but Arison wanted to convey good times, not grandeur. He renamed it the Mardi Gras. He called the new company Carnival. Like many corporate juggernauts—and Carnival would devour so many competitors that rivals would call it “Carnivore”—Carnival’s rise is shrouded in myth. As the story goes, on its maiden voyage, with hundreds of travel agents on board, the Mardi Gras ran aground while it was still in sight of land. For 28 hours. Anxious to salvage the event, staff plied guests with free liquor. When it finally got going, the aging Mardi Gras had to creep along to conserve fuel. The idea was born: Carnival would be what Arison’s son and successor, Micky, called “the fun ship.” Instead of treating the cruise as a way of getting to a destination, the cruise would be the destination.

THE CRUISE SHIP OUTBREAK WAS THE AMERICAN PANDEMIC IN MINIATURE; THE VIRUS FED OFF THE INEQUITIES OF HEALTH, LABOR, AND HOUSING.

But the company’s success story is not just one of branding; it’s also the product of an elaborate legal scaffolding. Take the ships themselves. During World War II, the United States embraced flags of convenience to keep the flow of supplies going to Europe while nominally staying neutral. Ships that were American in all other ways could fly the colors of any nation that would have them. After the war, shipowners rushed to register their fleets in small countries that were happy to absolve these companies of corporate tax obligations, regulations, and oversight in return for a filing fee. The Diamond Princess, for example, flies the flag of the United Kingdom, but it’s owned by Princess Cruises, which is headquartered in Southern California and incorporated in Bermuda. Princess’ parent company, Carnival, a company so clearly ensconced in Miami that taxpayers helped fund a new cruise terminal for the company and a basketball arena (Micky Arison owns the Heat), is officially Panamanian. The itinerary of many cruises is even dictated by the need to preserve this system. US law prevents foreign-flagged ships from traveling directly between American ports, so as a workaround, a ship leaving Florida must visit at least one foreign destination before turning around.

Cruises surged in popularity because they are affordable for middle-class families and senior citizens but still offer luxury trappings. Foreign-registered companies can offer such prices because of how little they have to pay for anything else. While relying on the services of roughly 20 different federal agencies, Carnival saved $600 million last year by paying virtually no US corporate taxes. (The company points out that last year it paid more than $700 million in port fees and various federal, state, and local taxes.) But the offshoring of the business also boosted the industry’s bottom line in another big way—it allowed companies to skirt US labor laws.