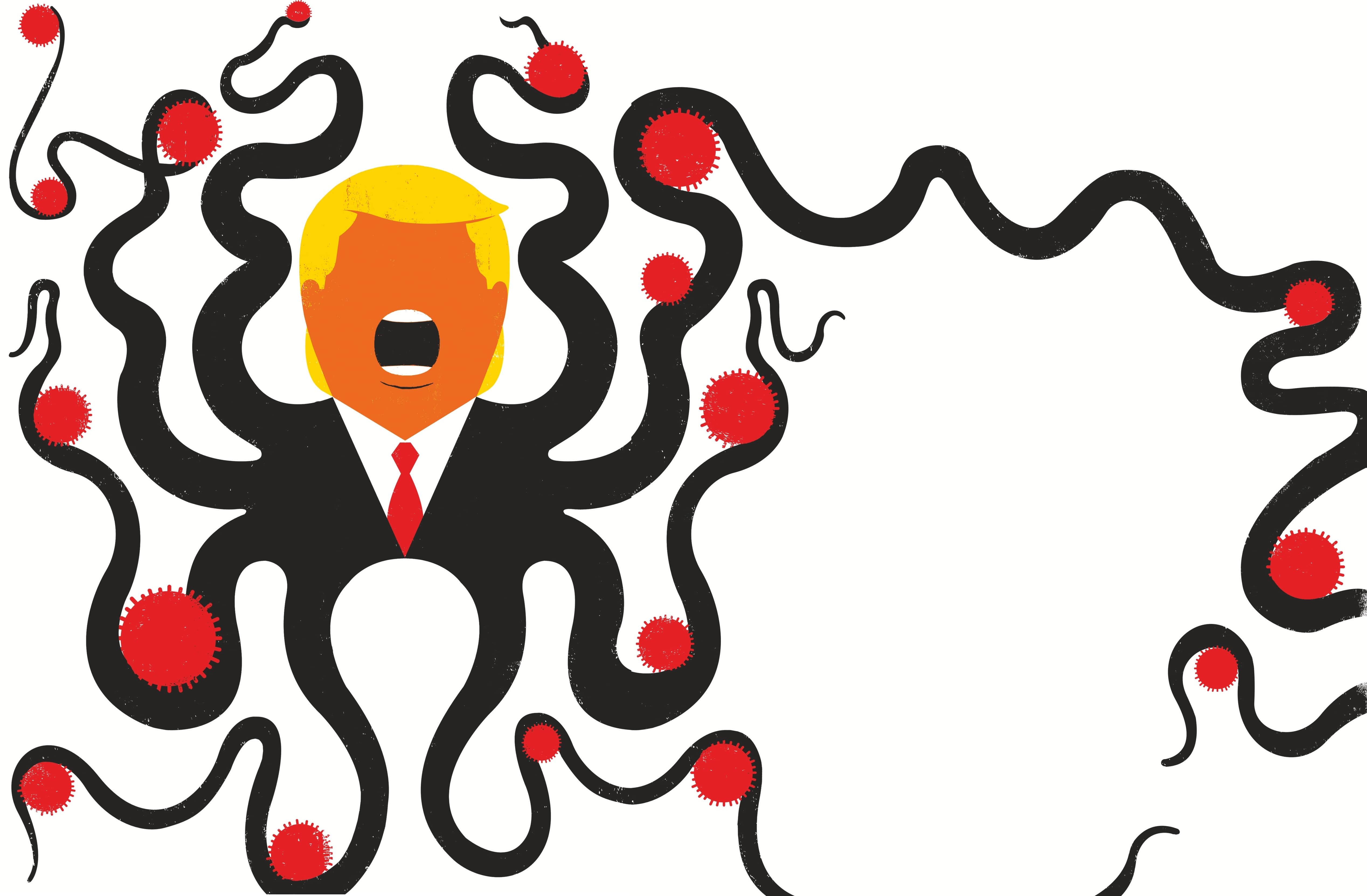 THE FUNDAMENTAL PURPOSE of government is rather simple: protect the citizenry. Any deliberate perversion of this priority is an exercise of corruption—especially when that basic aim is supplanted by the goal of personal gain. That’s why Donald Trump’s slow, ineffectual, self-serving, and deadly response to the coronavirus has been the most consequential act of corruption in the history of American governance. It eclipses Watergate, Teapot Dome, Iran-Contra, you name it. It also happens to be the continuation—perhaps the culmination—of the corruption that Trump started spreading like a virus the moment he tramped into the White House.

Corruption in government is generally thought of as an official exploiting power or position for personal benefit, often to line his or her pockets or those of a favored associate, relative, or corporation. There has been plenty of that during the Trump years. And Trump was impeached for an act of outright corruption. He leveraged his office—his ability to grant a foreign leader a White House meeting and to hold up nearly $400 million in military assistance—to pressure the new president of Ukraine to initiate unfounded investigations that would help Trump politically. In the case of the coronavirus crisis, Trump embraced a similar me-first course. He prevented the government from performing actions that could keep Americans safe because he believed downplaying the burgeoning crisis best served his political interests. He corrupted the mission of the US government—as a result, tens of thousands of Americans died and the economy collapsed.

Trump’s record of inaction, incompetence, and inane remarks during the first months of the pandemic has been well documented. (See “Failed State,” page 12.) Yet he wasn’t merely flailing. He purposefully thwarted official action because of concerns about his own electoral prospects. He resisted an aggressive push for testing because that could yield higher numbers of confirmed coronavirus cases, and he believed that lower levels would be better for his reelection campaign. When Health and Human Services Secretary Alex Azar warned Trump of an impending pandemic in late January, Trump brushed him off as an alarmist. Azar’s message was not in sync with Trump’s decision to discount the coronavirus threat. In late February, Nancy Messonnier, an official at the Centers for Disease Control and Prevention, publicly said her agency expected widespread transmission and was preparing for a pandemic. Wall Street plunged, and an enraged Trump—who had recently declared that the virus “miraculously goes away” and the situation was “very much under control”—threatened to fire her.

Trump failed to move quickly and impeded a fast and comprehensive response. His self-interest was always paramount—to an absurd extent. He touted the “ratings” his coronavirus press conferences received and devoted more time during these briefings to deflecting responsibility, attacking journalists, and blaming Democratic politicians than to mourning the dead. And his administration oversaw a $2 trillion economic rescue and the bailout that was practically designed to facilitate corruption. A huge piece of it was turned over to banks to manage, and the banks rigged the system for preferred customers, which froze out many small businesses, particularly outfits owned by people of color. (In several cases, the funds went to companies—some run by Trump donors—that hardly seemed the neediest.) This package also included a pot of $500 billion for Treasury Secretary Steven Mnuchin to distribute to large corporations with few strings attached and little public oversight. Democrats justifiably called it a “slush fund.” In a further blow to transparency, Trump ousted the inspector general who was leading the task force assigned to monitor this relief package.