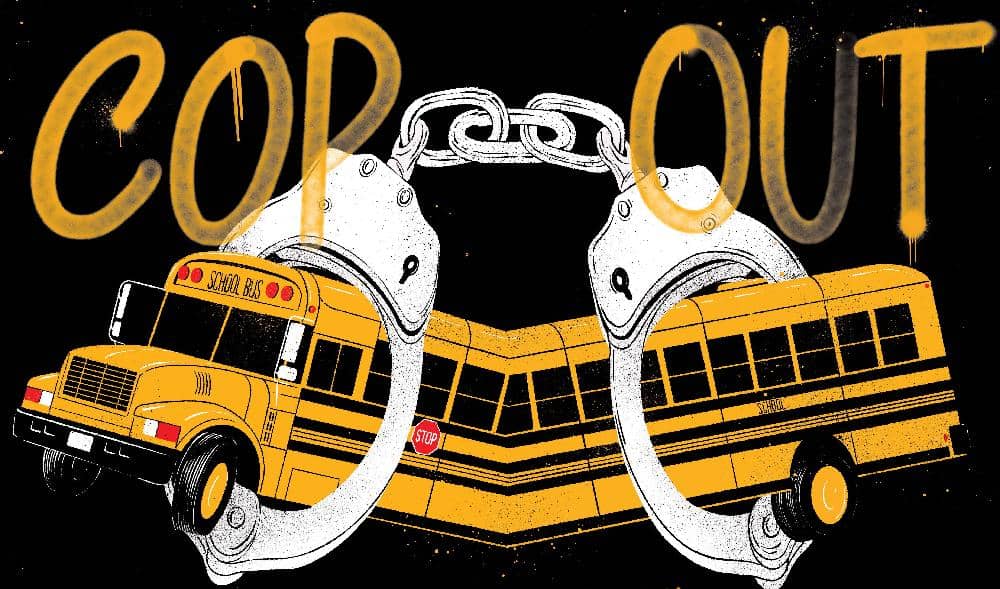 ONE WINTER NIGHT IN OAKLAND nine years before a police officer knelt on George Floyd’s neck, Raheim Brown and his friend Timesha Stewart, both 20, were smoking weed in a Honda, hazard lights blinking. It was 9 p.m., and two cops who had been patrolling a school dance near Skyline High School approached the car. They were Barhin Bhatt and his partner, Jonathan Bellusa, both ser­ geants with the Oakland School Police Department. At the time they did not know the Honda had been stolen. They would claim they decided to investigate because they thought the car was parked in a strange spot.

Pretty much everything that happened next is still in dispute. Bhatt walked up to the driver’s side, where Stewart was seated, and began speaking to her. Brown told her to drive away, reaching over and jamming a screwdriver into the ignition. Bellusa opened the passenger door and grabbed Brown by the collar to stop him. When Brown resisted, a violent struggle ensued. Bellusa believed Brown was stabbing him in the upper chest, though Stewart insists the screwdriver never left the ignition, and a forensic analysis found no strike marks on Bellusa’s shirt or vest.

“Shoot!” Bellusa yelled. He says he spot­ ted a revolver in the passenger door, though Stewart insists there was never a gun in the car and that the one found by police had been planted after the fact. “Gun!” Bellusa shouted. Bhatt shot Brown seven times. Stewart would later recall her friend’s plea: “Help me, sis.” He passed away in that pas­ senger seat, his hands resting on his lap.

Brown’s family demonstrated in front of Oakland Unified School District headquar­ ters with dozens of people, calling for the disbanding of the city’s school police force. Brown’s mother, Lori Davis, described her son as a “very beautiful, loving, bright, intelligent, respectful human being.” She called his killing an “assassination.” She and Raheim’s father sued the district and eventually received a settlement, but no reforms were made to the Oakland School Police Department.

A former police lieutenant hired by the school district to conduct an investigation found that Bhatt had been “in reasonable fear” and was thus “justified in shooting Brown.” Bellusa later alleged that the school district tried to cover up the incident. Nevertheless, Bhatt was promoted to in­terim school police chief just months after Brown’s death; the previous chief, Peter Sarna, had resigned after he told a Black police sergeant during a drunken exchange that “the only good nigger is a dead nigger and they should hang you in the town square to prevent any other niggers from coming in the area.” Bhatt lasted just one month. He now runs a private security firm.

How Brown died had everything to do with where he died. Skyline High, up in the Oakland hills, had been the site of a bitter fight over segregation. Not coinciden­ tally, the Oakland School Police Department was created in 1957, the year after the school’s construction was approved. If you want to understand why there were cops patrolling school dances in 2011, you have to go back more than 50 years, to the mi­gration of Black Southerners into the city, into its shipyard jobs and Victorian houses and classrooms, and to the racist backlash of white Oaklanders against it. Cops and schools and segregation—in Oakland, as in other urban centers, the evolution of these institutions is intertwined. Just look at the numbers from recent years. Since the 2015– 2016 school year, Black students have ac­ counted for nearly three out of four arrests at Oakland schools, despite constituting 26 percent of students. From 2010 to 2012, not a single white student was arrested by Oak­ land School Police.

As of this summer, the police force that killed Raheim Brown no longer exists. In June, the Oakland school board approved a resolution named for George Floyd that would abolish its school police department altogether. Since Floyd’s death, at least 40 other school districts around the country have significantly reduced their use of “school resource officers”—a euphemism for cops in schools—or out­ right eliminated them, according to the Justice Policy Institute.

In Oakland, the victory was roughly half a century in the making. For as long as cops have been in the city’s school system, Black Oaklanders have protested their presence. The history of their resistance reveals a deeper meaning to the June resolution. It wasn’t just a matter of getting the police out of the schools. It was part of the unfinished project of rolling back the color line.

DELINQUENCY HAD to be invented before delinquents could exist. In 1852, amid a massive wave of Irish immigration, Massa­chusetts passed the country’s first com­ pulsory education law. “Aimed at youth who were not in school or gainfully em­ ployed, whom the law defined as truants, it permitted the police to scoop them up from the hurly­burly of Boston street life and its temptations of vice and crime,” writes Annette Fuentes in her book Lockdown High. “Almost an early version of current day racial profiling in law enforce­ment, this law targeted Irish children, who, along with their mostly impover­ished families, were seen as contributing to social disorder and crime.”

The dynamic is no great mystery: A new underclass must be criminalized to justify its subordination. For children, sociolo­ gist Frank Tannenbaum observed in 1938, this meant labeling normal acts of “play, adventure...mischief, fun” as delinquent. Tannenbaum viewed early contact with au­thorities as a critical part of what he called “the dramatization of evil,” whereby “the young delinquent becomes bad because he is defined as bad and because he is not believed if he is good.”

It was another vast movement of people, the Second Great Migration, that led to the modern explosion of school policing. Be­ ginning in the 1940s, Black people fled the South in huge numbers for industrial cen­ters in the North and West—cities like Chi­cago, Detroit, Los Angeles, and Oakland. In 1940, Black residents accounted for just 3 percent of Oakland’s population. A decade later, they made up 12 percent.

“The response to this mass migration of African Americans into California was a pu­nitive one,” said Donna Murch, a history pro­fessor at Rutgers University and the author of Living for the City: Migration, Education, and the Rise of the Black Panther Party in Oakland, California. “From the point of view of Black migrants, they see California as a place of opportunity. The schools and the police, these different parts of the state, see them as a threat.” School policing was part of a general program of social control, intimately connected with other practices developed in rapidly integrating cities to maintain Jim Crow by another name. Black people were redlined out of access to mortgages, and Black families were gerrymandered into un­derfunded school districts whose schools tended to be microcosms of the system of racial subordination. Black students were “tracked” into low­achievement classes, sur­veilled by administrators, and criminalized by the police. “When you don’t provide re­ sources, and you don’t set expectations, and you essentially tell people at a very young age that they are limited, you actually are pro­ducing those limitations,” Murch said. “The problem is white supremacy and racial vio­lence. The police are a literal, physical form of violence, but you have these other forms of violence, through that denial of an ed­ucation for your future, through stripping children of their sense of themselves to tell­ ing a generation of children that they are stupid.” These processes are fundamental to the workings of white supremacy and an­ti­Blackness. “Black children are never al­ lowed to be children,” Murch said.