India Today|August 17, 2020
We're offering this story for free to read so that you can stay updated on the COVID-19 outbreak 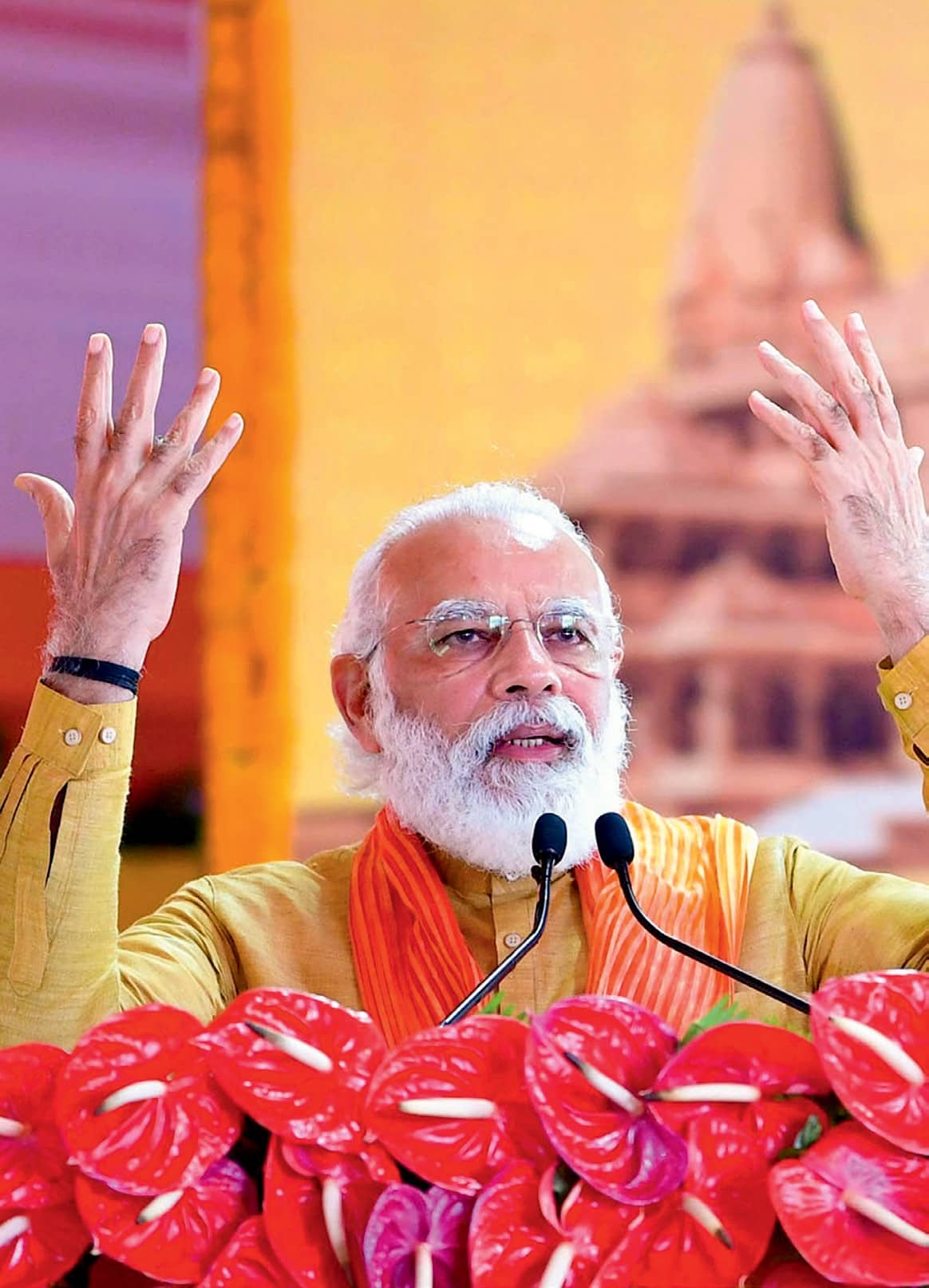 What is the secret behind the unwavering popularity of the prime minister at a time when the nation is riddled with multiple crises?

There is not a single head of state in the world whose leadership has not been tested by the Covid-19 pandemic. Confronted with a crisis of unparalleled magnitude, these leaders will either make or break their reputations on their ability to successfully guide their nations through these troubled times. As the US civil rights leader Martin Luther King Jr once said, “The ultimate measure of a man is not where he stands in the moments of comfort, but where he stands at times of challenge and controversy.”

The burden weighs even more heavily on Prime Minister Narendra Modi’s shoulders as he faces a dangerous trinity of threats: the health emergency caused by Covid-19, the economic distress it has caused an already slowing economy and the Chinese aggression on our borders. Yet, so far, he seems to have weathered this triple onslaught rather well. The latest round of the INDIA TODAY-Karvy Insights biannual Mood of the Nation survey shows that the prime minister’s popularity has soared to an unprecedented level. A phenomenal 78 per cent of those polled have rated his performance as good to outstanding as compared to 71 per cent in the MOTN survey of August 2019. (This was soon after he was re-elected a second time with a handsome majority in the May 2019 general election.) In fact, in the past five years, Modi’s personal popularity in the MOTN polls has never been as high as it is now despite the serious woes the country faces. 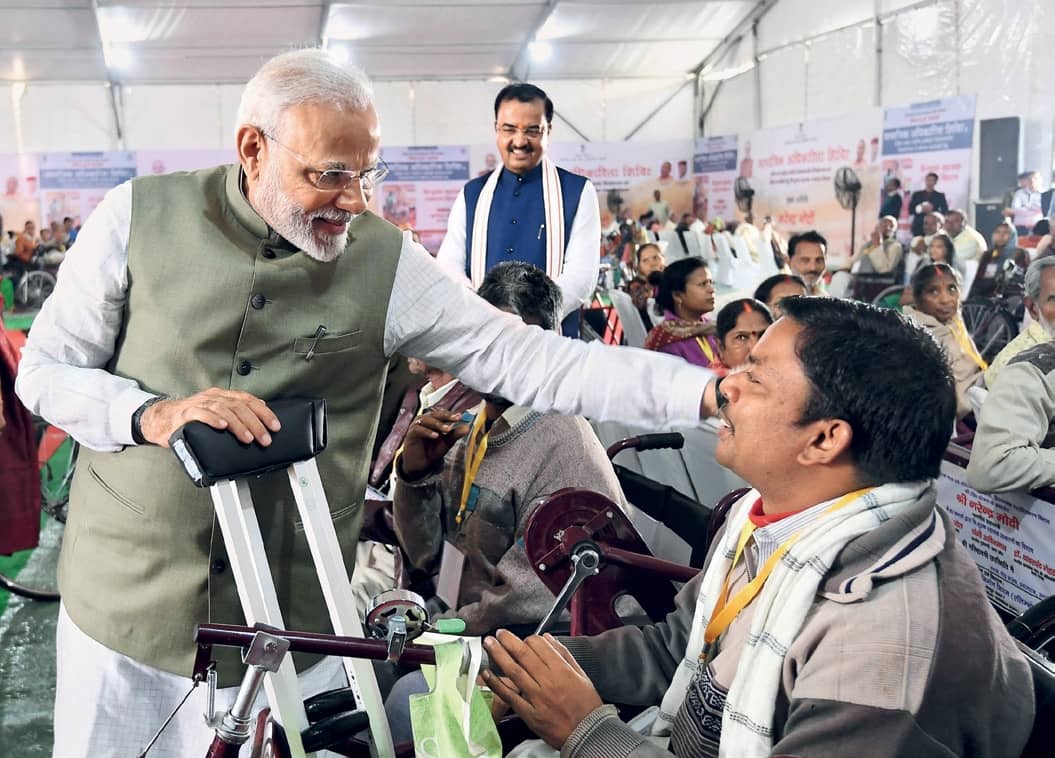 Reiterating the support for Modi, the poll shows that if elections were to be held now, the BJP would still command a comfortable majority on its own with 283 seats—though it would be 20 seats down from the 303 it won in the 2019 general election. The results are a boost for Modi because in the MOTN poll of January 2020, the BJP tally had fallen to 271—one short of a simple majority on its own in the Lok Sabha. The NDA’s projected tally too has gone up from 303 to 316 but it is still far short of the 353 it won in the general election, with several allies, particularly the Shiv Sena, leaving its fold. The numbers of both the BJP and NDA had fallen in January 2020 mainly because of the steep downturn in economic growth. However, in the current poll, despite the triple whammy of crises, the BJP, and by default the NDA, is seeing a revival in its political fortunes. The gap between Modi and his nearest rival, Rahul Gandhi, in response to the question—‘Who is best-suited to be India’s next prime minister’—has widened to 58 percentage points compared to 12 a year and a half ago. The perception that he is the best prime minister India has had so far has also increased significantly (see charts). 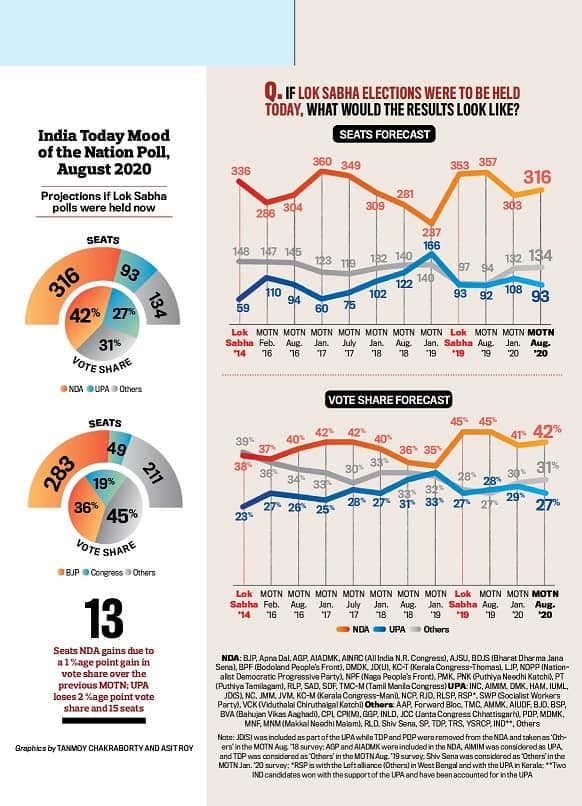 What explains Modi’s remarkable surge in popularity among the respondents despite the ongoing crises? What is Modi’s management mantra for success? In a perceptive article published by the Harvard Business Review (HBR) this April, management consultants Chris Nichols, Shoma Chatterjee Hayden and Chris Tendler outline four behaviours that help leaders manage a big crisis like Covid-19: 1. Decide with speed over precision; 2. Adapt boldly; 3. Deliver reliably; and 4. Engage for impact. Modi not only seems to have fulfilled these criteria but has also gone on to add more, making his leadership style worthy of an HBR study by itself. Take Behaviour 1: Decide with speed over precision. The article states, ‘The situation is changing by the day—even by the hour. The best leaders quickly process available information, rapidly determine what matters most and make decisions with conviction’, avoiding ‘analysis paralysis’. When it came to Covid-19, that’s exactly what Modi did when he decided to dramatically announce a nationwide lockdown on March 24, giving people only a four-hour notice. 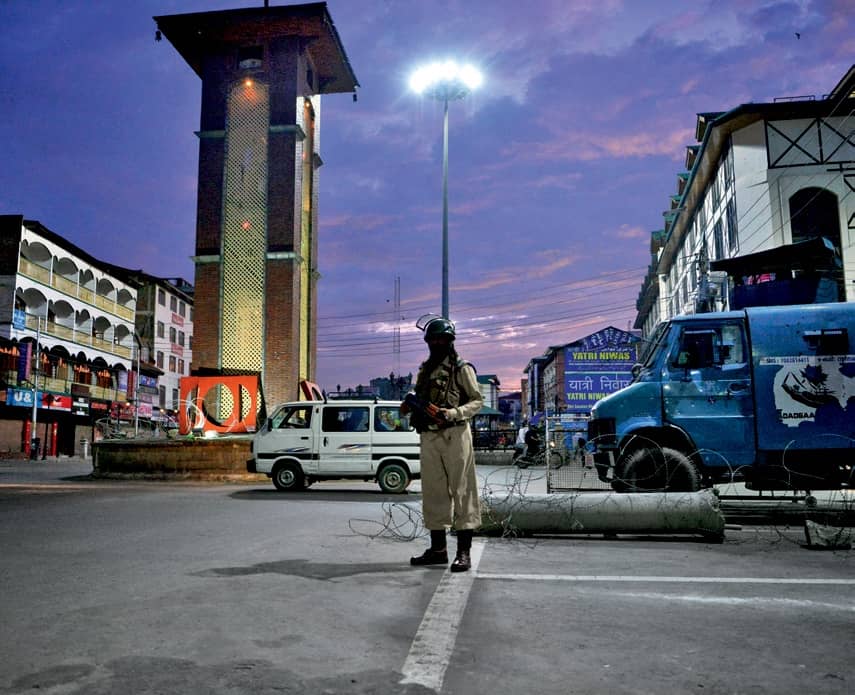 Modi’s decision to impose the lockdown without sufficient warning was criticised by many as was the need for a total shutdown that would clearly harm the economy. But he chose speed over precision because he knew that the Indian health system was in no position to handle a pandemic of this magnitude if the disease spread rapidly. The prime minister, therefore, decided to buy time through the lockdown to fortify the nation’s capacity to treat patients and save thousands of lives.

While the first few days saw chaos, taking the advice of principal secretary Dr P.K. Mishra, an expert in disaster management, Modi decided to form a central command, a “war room” as it were (which the HBR authors advise), where he empowered a frontline of senior secretaries and experts to address the various problems that Covid was causing. These 11 empowered groups took decisions on key issues ranging from the availability of critical medicines and treatment centres to facilitating the supply chain and logistics for essential commodities as well as working out economic welfare measures for those who were the most severely impacted by the lockdown.

The results were telling. When the lockdown began, the nation had to import personal protection equipment (PPE) like masks, gloves and body-suits. But within two months, India became self-sufficient in PPE kits, with Indian companies rallying around to manufacture them. Testing facilities for Covid-19, which were abysmal in March with barely 5,000 tests being done a day, were ramped up and now total over 664,000 per day. Ventilators critical to the care of seriously ill Covid patients (2 per cent of those afflicted go on to require ICU facilities) were also in short supply for which domestic production was pumped up.