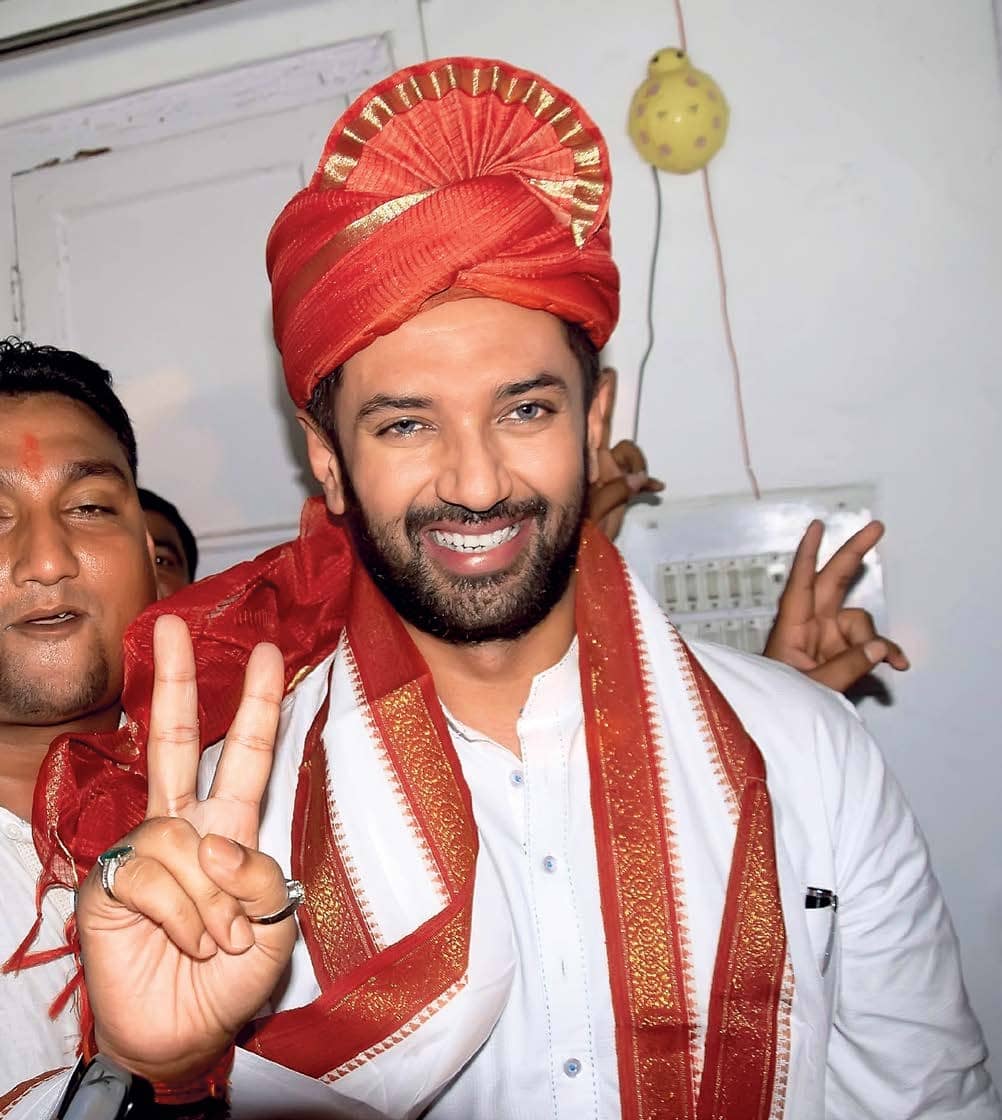 THE YOUNG PASWAN SCION IS SEEKING TO CARVE A SPACE FOR HIMSELF IN REGIONAL POLITICS, AND IS UNWILLING TO CONCEDE THE LJP’S SHARE OF SEATS TO NITISH AND THE JD(U)

AMITABH SRIVASTAVA
Three days after BJP president J.P. Nadda met Bihar chief minister Nitish Kumar in Patna on September 12, apparently to work out a seatsharing arrangement, Lok Janshakti Party (LJP) chief Chirag Paswan also reached out to Nadda for a “late night meeting” in New Delhi. No one knows what transpired, but Chirag is believed to have asked the BJP chief that LJP be allowed to contest the 42 seats it did in 2015 as part of the National Democratic Alliance (NDA). With Chief Minister Nitish Kumar’s Janata Dal (United) returning to the NDA fold in 2017, Chirag wants to ensure his party is not shortchanged to accommodate the JD(U) in the upcoming election to the 243-member Bihar assembly.

Again, on September 20—just two days after Prime Minister Narendra Modi, while inaugurating a slew of railway projects in Bihar on September 18, endorsed Nitish Kumar by saying, “Nitishji jaisa sahyogi ho to kya kuchh sambhav nahin hai (with Nitish by your side, nothing is impossible)—Chirag wrote a letter to LJP workers, saying Bihar was being run according to the ‘Saat Nishchay’ programme the JD(U) evolved as part of the mahagathbandhan with Lalu Prasad Yadav’s Rashtriya Janata Dal (RJD) and the Congress in 2015. And that Chirag was working on a ‘Bihar First, Bihari First’ model of development for the state. It was an emotional appeal to the cadre at a time when his father Ram Vilas Paswan, the tallest Dalit leader in the state, was in intensive care in a Delhi hospital, though reportedly for a “routine health check-up”.

Clearly, the younger Paswan is looking to leave a mark in the assembly election in his state. A two-time MP from Jamui, the 38-year-old has now shifted focus to his home state, and is seeking to position himself as Bihar’s most prominent youth leader in opposition to the RJD’s Tejashwi Yadav. He has also started attacking the Nitish Kumar government in the state—and his pitch has lately acquired a more strident edge, forcing the JD(U) to respond in kind. Beginning February, he launched his Bihar First, Bihari First yatra, before it was cut short by the coronavirus pandemic.

But does Paswan junior have it in him to break out of his illustrious father’s shadow and become a significant leader in his own right? So far, he owes his rise in politics to his father and the backing of the Paswan community, which constitutes 4.5 per cent of the state’s electorate. And while the LJP may have six members in the Lok Sabha and his father may be a Union cabinet minister, the party has only two MLAs in Bihar. In bargaining for his share, is Chirag punching above his weight?

MAN IN A HURRY

Bollywood, not politics, was Chirag’s chosen career to begin with. A computer science graduate from Bundelkhand University, he debuted in the 2011 film, Miley Naa Miley Hum. When it sank without a trace, Chirag turned to politics. Father Ram Vilas credits Chirag’s political acumen for his party’s decision to join the Narendra Modi camp in 2014, resulting in the LJP posting its biggest Lok Sabha win in 2014, after a nil score in 2009. Chirag himself won the Lok Sabha election in 2014 and 2019.