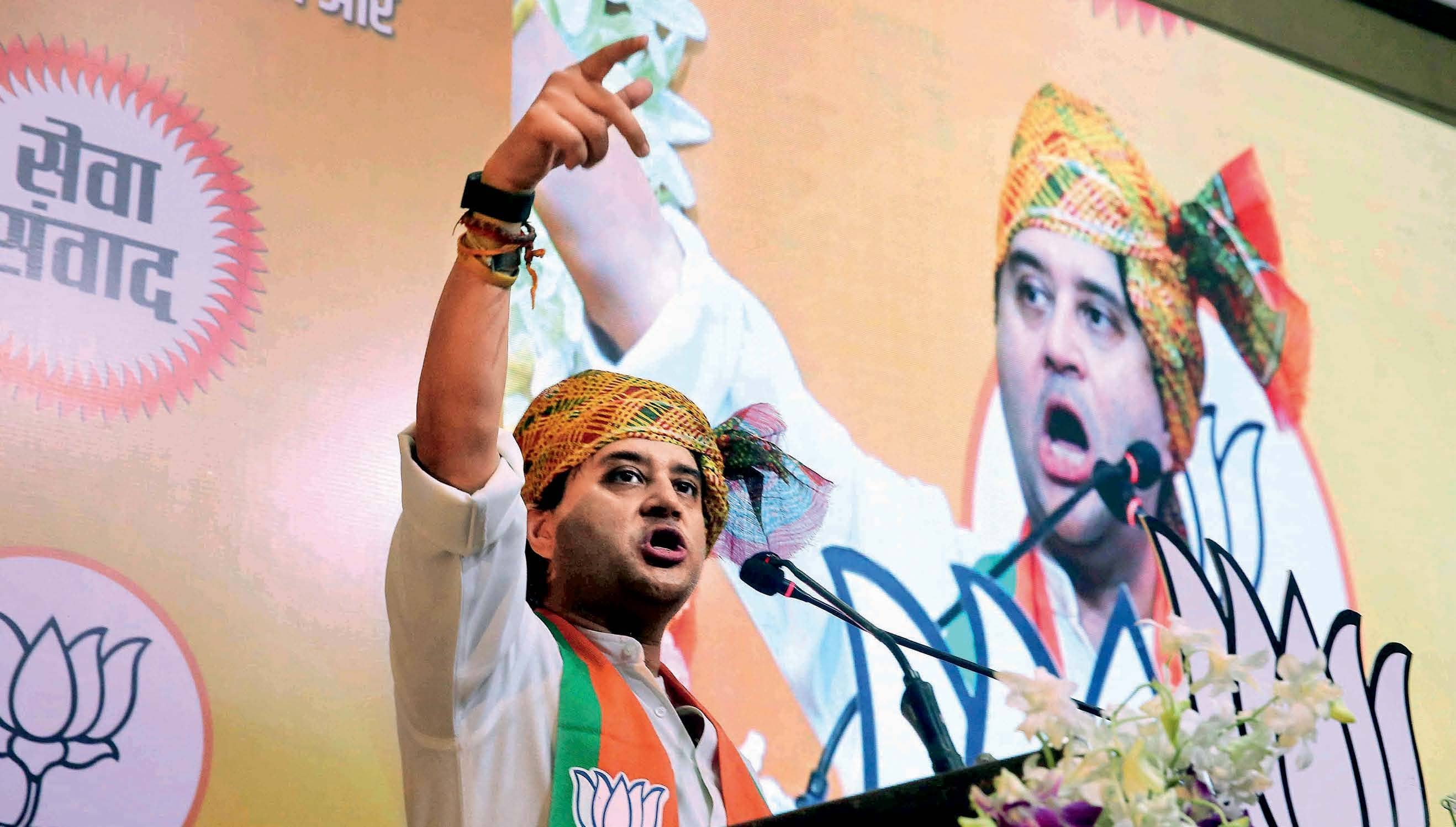 CRUCIAL BYPOLLS ON ITS MIND, THE BJP GIVES JYOTIRADITYA SCINDIA LOYALISTS A LION’S SHARE OF POSTS IN THE SHIVRAJ CABINET EXPANSION, RISKING THE WRATH OF PARTY VETERANS LEFT OUT

“Jab manthan hota hai toh amrit nikalta hai, aur joh vish nikalta hai usko Shiv pee jaate hain (A churn yields both ambrosia and poison, and Shiva drinks the poison [for the greater good]),” said Madhya Pradesh chief minister Shivraj Singh Chouhan on his return from Delhi on July 1 following tough negotiations on the much-awaited expansion of his cabinet. The sense of disappointment was palpable in the words of Chouhan, who in his past three terms as MP chief minister had enjoyed unfettered control over cabinet appointments and government posts.

Chouhan inducted 28 ministers on July 2, but the leader who walked away with a lion’s share of the appointments was a recent BJP entrant—Jyotiraditya Scindia. Poised to return to the Union cabinet himself, Scindia secured 11 positions for his loyalists in the 34-member state cabinet. The three other former Congress MLAs who got berths are not Scindia acolytes but were among the 22 legislators who had crossed over along with him to the BJP in March.

How did Scindia succeed in driving such a hard bargain in his new party, and why has the BJP risked antagonising its stalwarts in MP to accommodate his loyalists? Most importantly, how will all of this impact Chouhan’s chief ministerial stint? Sources say that at the time Scindia was negotiating his entry into the BJP along with his MLAs—whose resignations would bring down the Kamal Nath government—it had been decided that six of his loyalists would be made ministers in the new BJP government. They were Tulsi Silawat, Govind Singh Rajput, Pradyuman Singh Tomar, Mahendra Singh Sisodia, Prabhuram Choudhary, and Imarti Devi. MLAs Aidal Singh Kansana, Bisahulal Singh and Hardeep Dang, who were not Scindia camp members but had worked out their entry into the BJP, too, were to get cabinet posts. Rajvardhan Singh Dattigaon, an MLA considered close to Scindia, too, was to be appointed. However, the cabinet expansion on July 2 saw four more inductions from Scindia’s team, as ministers of state—Brajendra Singh Yadav, Giriraj Dandotiya, Suresh Dhakad and O.P.S. Bhadoria.

The Chouhan cabinet now has 12 ministers from the Gwalior-Chambal region, which accounts for 34 out of the 230 assembly seats. Seven out of them are Scindia nominees. Gwalior-Chambal remains a key battleground between the BJP and the Congress as 16 of the 24 assembly seats where by-elections are slated fall in the region. The by-polls have been necessitated by the defection of 22 Congress MLAs to the BJP and the death of two legislators.