THE EXODUS AND AFTER 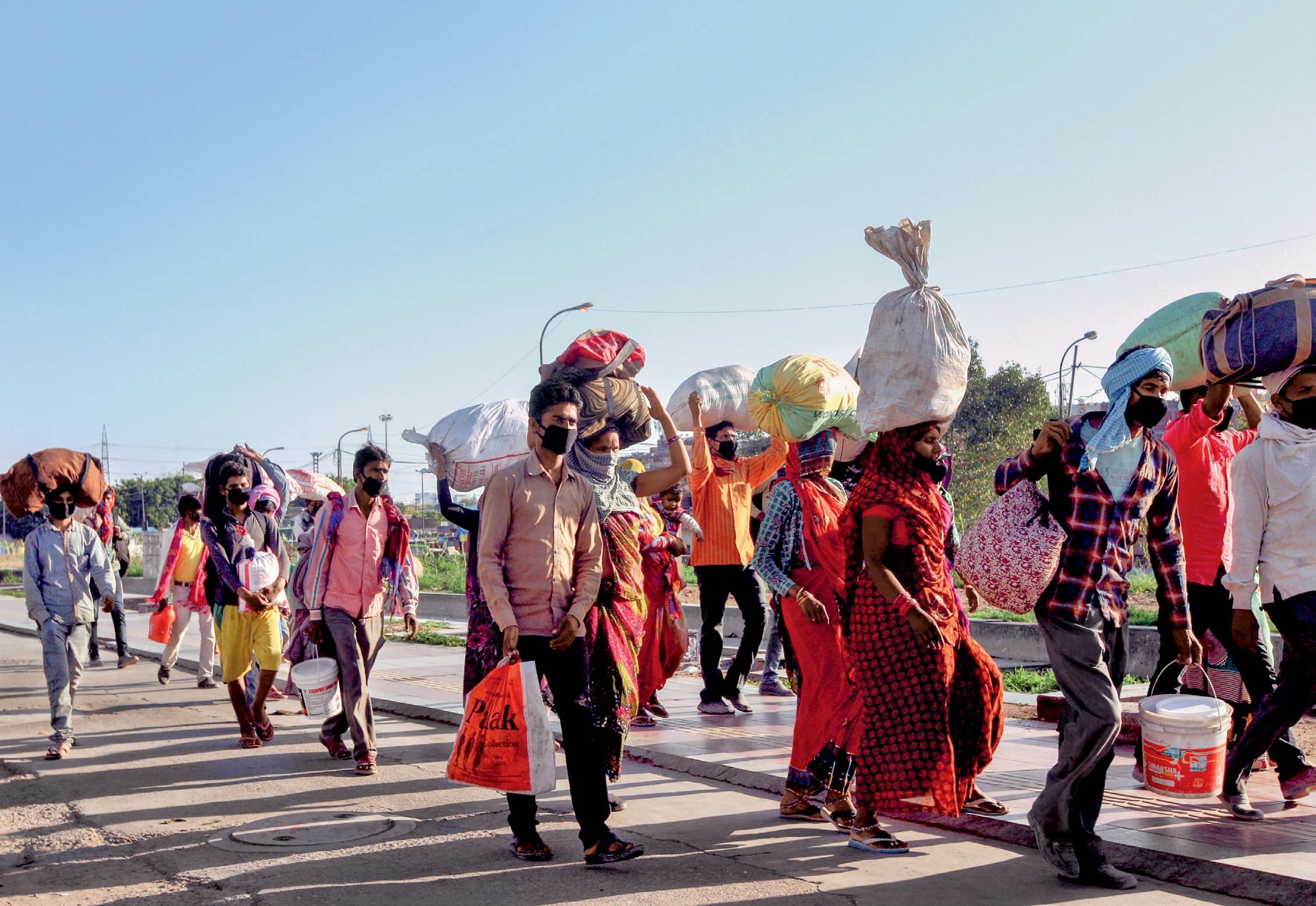 Stranded in cities with no jobs, homes or food, migrant workers across India are trudging home to their villages, burdened with their possessions and supporting hungry, tired children; or packed in buses with no scope of ‘social distancing’. Their drawn faces reflect the real toll COVID-19 has taken on people’s lives. What the government must now do to help them

There is no official number for those who have died as they trekked hundreds of kilometers from their cramped, basic rooms in cities to their home villages, but various reports tabulate at least 20 deaths, a likely underestimate. Panicked, hungry, and desperate, these migrant workers feel forsaken by their government. The scenes have been seen around the world, thousands walking in slippers, carrying their children, their few belongings, with barely enough to eat on journeys that will last several days. That is if they get that far. Most are being intercepted and held in camps, now that the Centre has told states to seal their borders. The images were especially jarring after the faux-festive clangour at five in the evening on the day of the Janta Curfew on March 22, when India responded to Prime Minister Narendra Modi’s call to show appreciation for those fighting on the frontline of the so-called war against COVID-19 by banging pots. To see just days later, the drawn faces of those suddenly without homes, income, food and, in many cases, family, walking in the dark, in the heat of the afternoon, through the police gauntlet, was to see the real toll taken by COVID-19.

Munna Mehta, 38, had a steady job in Bengaluru, making Rs 18,000 a month, until he lost it because of the pandemic. With no income, he and three other men from his village, over 2,000 kilometres away in Bihar, walked to the railway station the day before the Janta Curfew and boarded a train to Ranchi. The plan was to board another train to Bhagalpur. After Modi declared a 21-day lockdown, just a day later, the men could find no further onward transport and tried to walk to Ranchi, only to be stopped by the police and moved into a government shelter. The men say they are grateful that the government has given them a “roof over our heads” and one meal a day, but their frustration is obvious. Munna tears up when he says he has children awaiting his return. He did not want to stay on in Bengaluru and spend the money he had saved for his family, when he knew he might not be able to make that money again, at least not soon.

Stories like this abound across the country. Kamla Devi, 45, is a widow who worked in a paan masala factory in Kanpur. A labourer under contract, she found herself out of work on March 22. With “very little money” and three sons under 10 years of age to look after, she tried to make it home to Bahraich. It took her and her sons four days to walk to the Charbagh bus stand in Lucknow, arriving there on the morning of March 28; like them, thousands of others were waiting for buses laid on by the state government to ferry them home. The Uttar Pradesh government had arranged 1,000 buses for migrant workers; the Delhi government, too, provided buses, though Chief Minister Arvind Kejriwal would have to field criticism from his counterparts in UP and Bihar for not doing enough to stop migrant workers trying to get home in the first place. The Centre too, mindful of accusations of a lack of planning in advance of its dramatic 8 pm announcement of a nationwide lockdown, has tried to put the ball in the Delhi government’s court. Lieutenant-governor Anil Baijal wrote a letter to Kejriwal in which he expressed disapproval of the state government’s failure to impose the Centre’s lockdown orders. “This single lapse,” he wrote, “could defeat the very purpose of the ‘lockdown’ and impose a very heavy cost on the entire nation.”