The Battle For Bengal- Can The BJP Win? 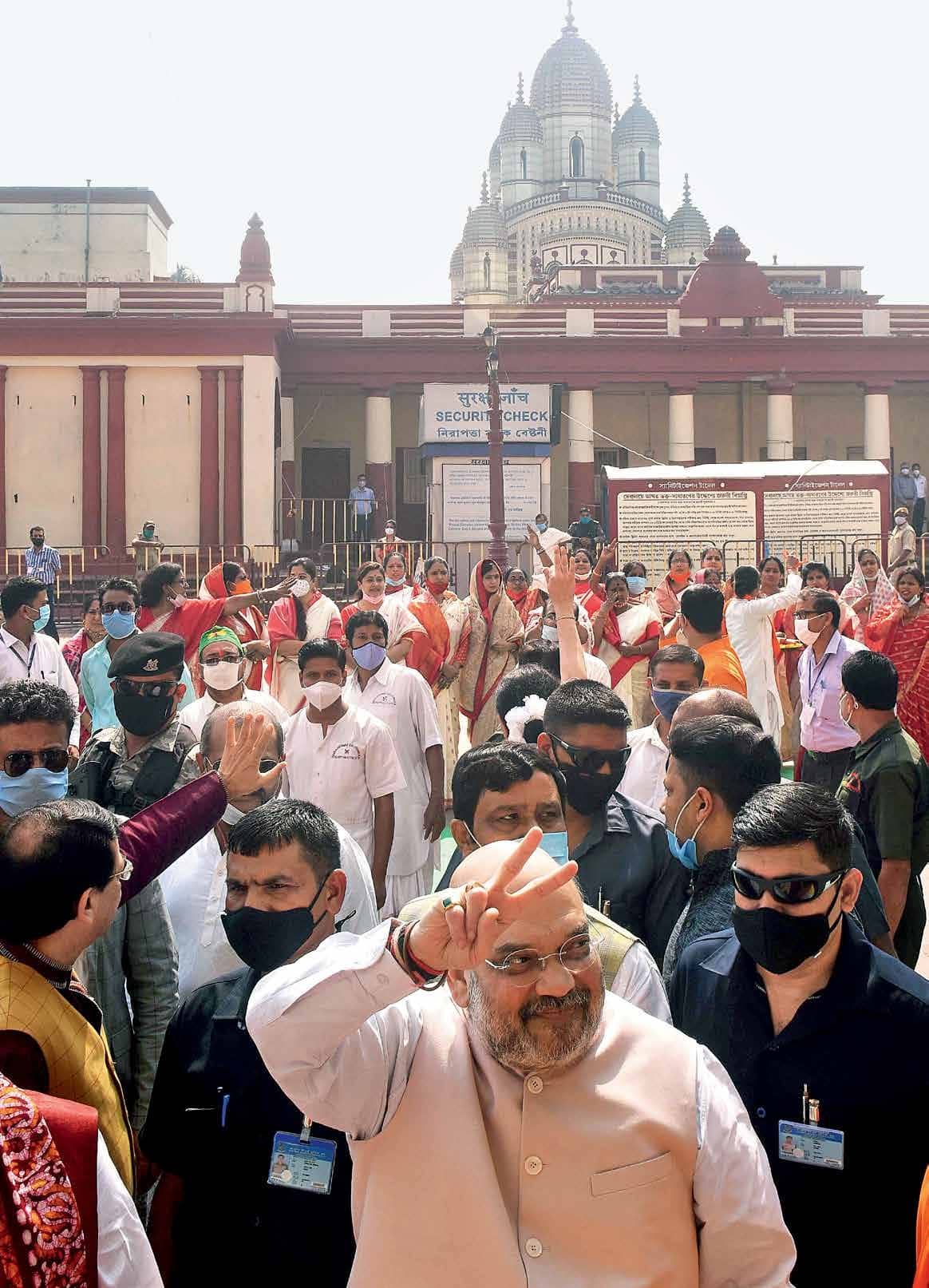 With a spring in its step after the recent Bihar victory, the BJP has launched a full-scale offensive to win West Bengal. How credible is its pitch and what are its chances against the formidable two-term chief minister Mamata Banerjee?

Romita Datta
In his 40-minute victory speech at the BJP headquarters in New Delhi on November 11, a day after the NDA win in Bihar, Prime Minister Narendra Modi took a moment to exult at the BJP’s expansion from “two seats, two rooms” to “every corner of the country”. He attributed the BJP’s rise to the collective effort of party workers, using the occasion to disparage ‘family parties’ or those that used violence as a means to counter democratic means. “The dance of death cannot work in a democracy,” he thundered. Such parties have to “read the writing on the wall”. And the writing on the wall could not be clearer. It was directed at Mamata Banerjee and her party, the Trinamool Congress (TMC), which has been ruling West Bengal for the past nine and a half years. The very anti-incumbency that has led to Nitish Kumar’s diminution in Bihar haunts Mamata in West Bengal too. Moreover, she will be facing a pumped-up and reinvigorated BJP, buoyed further by the victory in Bihar, when the state goes to election in May 2021.

The stakes are high and the BJP is certainly not wasting any time. Party general secretary Kailash Vijayvargiya was reappointed West Bengal in-charge on November 13, while former RSS pracharak Arvind Menon and BJP IT cell chief Amit Malviya were made co-in-charges. BJP president J.P. Nadda and senior party office-bearers will tour the state this week to gauge the preparedness of party workers. From now on, Shah and Nadda will be visiting the state frequently. A war room will be set up to devise a poll strategy, run social media campaigns, finalise candidates and hone the booth management strategy. BJP state chief Dilip Ghosh threw down the gauntlet to the TMC shortly after the Bihar result. ‘Ebar Bangla, parle shamla (This time Bengal, save it if you can)’. The war is on.

WHY BENGAL IS THE NEXT STOP

Bengal is crucial for the BJP’s plans to complete its domination of the east and northeast and eventually, of the entire country. And Mamata remains the greatest impediment to that project. A trenchant critic of the prime minister, she is the fulcrum of opposition unity against the policies of the central government, be it demonetisation, the Goods & Services Tax (GST), the Citizenship Amendment Act (CAA) or the National Register of Citizens (NRC). Five national leaders—Farooq Abdullah, Akhilesh Yadav, Nitish Kumar, Lalu Prasad Yadav and Arvind Kejriwal—had attended her swearing-in ceremony in 2016 when she became chief minister for the second time, laying the foundation for a Federal Front. But even as the others fell by the wayside— Opposition parties were decimated in Uttar Pradesh, Nitish returned to the NDA fold and Lalu was sent to jail—Mamata soldiered on, determined to halt the saffron march firmly at her doorstep.

A VOCAL CRITIC OF THE MODI GOVT, MAMATA REMAINS THE ONLY IMPEDIMENT TO THE BJP PROJECT TO DOMINATE THE ENTIRE EAST 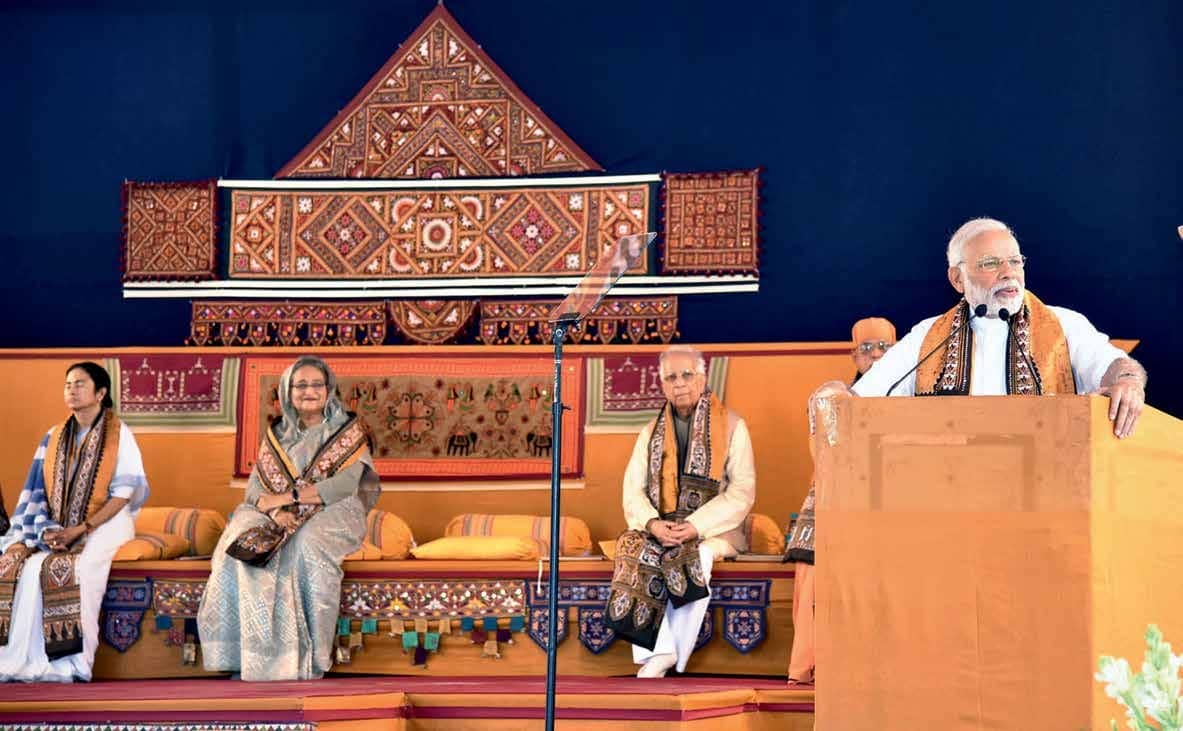 She has assiduously opposed central diktats, determined to uphold the federal character of her state. Thus she refused to cooperate with the inter-ministerial central team sent to examine lockdown violations in Bengal, was relentless in her focus on the migrants’ plight and remains a mercurial element in meetings with the Union government. Mamata has recast central schemes, such as Ayushman Bharat and PM Kisan Samman Nidhi, under the state government banner because she didn’t want the Centre to take full credit for the schemes when states were footing 40 per cent of the bill. She was also accused of not releasing the central share of Rs 3,146 crore and the state share of Rs 1,521 crore earmarked for PMAY-G, the central rural housing scheme. 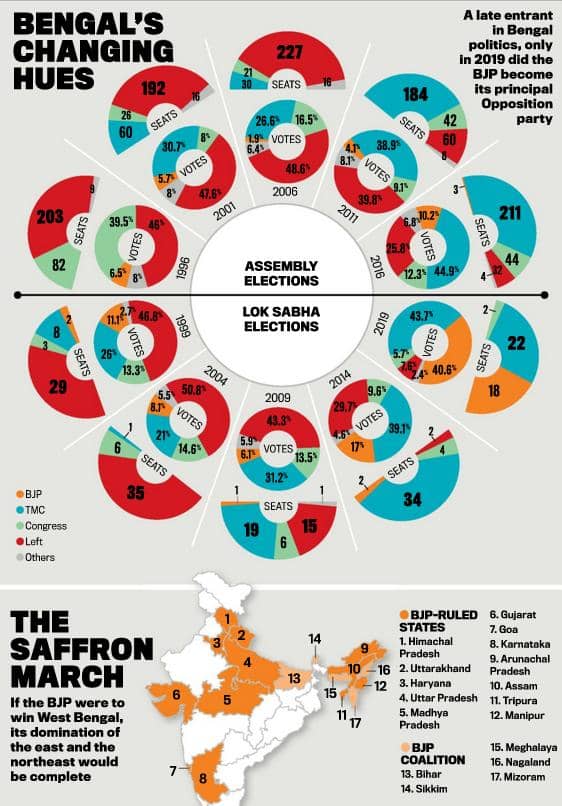 Mamata has also been able to give the BJP and its leaders as good as she got. When, in June 2019, the BJP appointed a new governor of Bengal—Supreme Court lawyer Jagdeep Dhankhar— who spared no opportunity to humiliate and harass her, Mamata shrugged off his attacks and put him in his place with aplomb. She has also succeeded in casting the BJP as the ‘outsider’ out to vanquish ‘Ma’ or the motherland. “You have conquered a lot. What more do you need?” she asks of the saffron side. Any attack on her government is quickly turned into an assault on Bengali Asmita (pride). “Only Bengal will rule Bengal, not Gujarat…” she asserts in rally after rally. 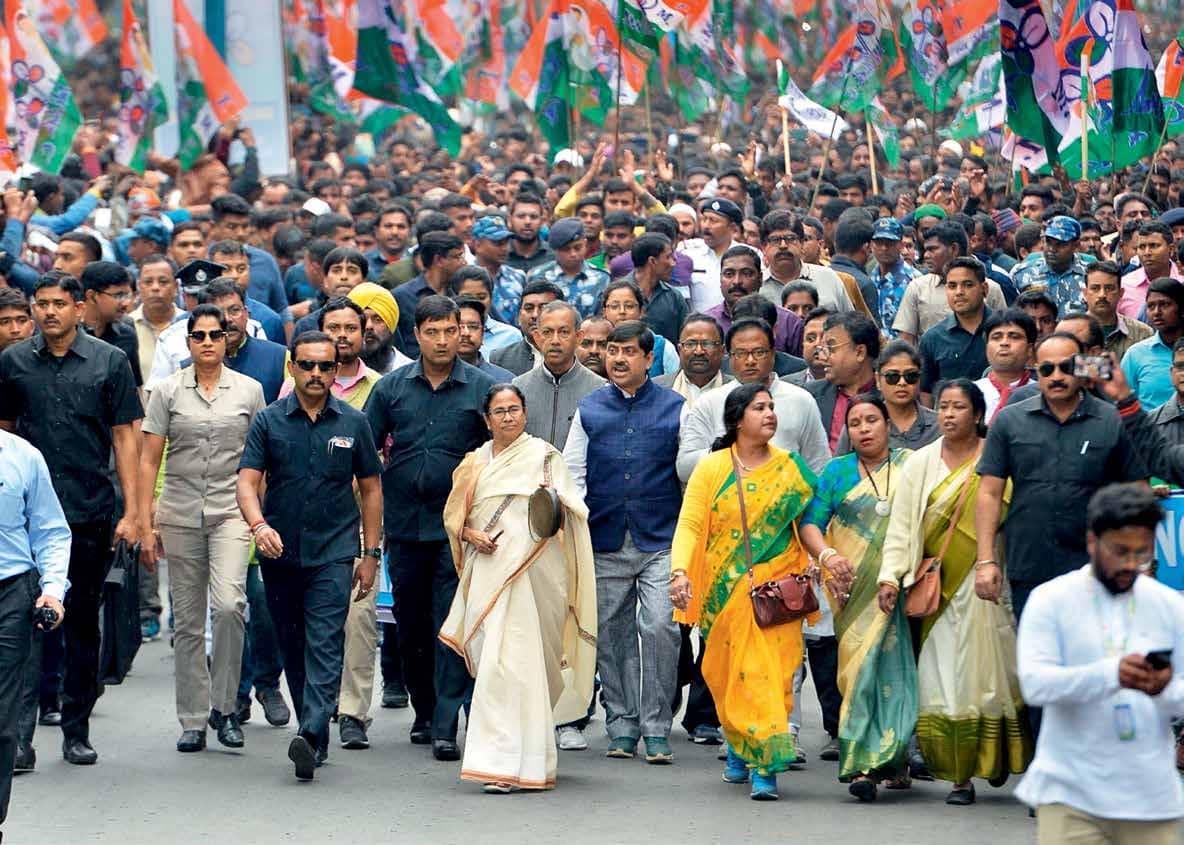 Neutralising Mamata, therefore, is integral to the BJP quest for an Opposition-mukt Bharat. Amit Shah, as then BJP chief, had launched Mission Bengal shortly after the spate of electoral successes in UP, Uttarakhand, Goa and Manipur in early 2017. He had even coined a catchy slogan—Ebar Bangla. It is now time to put the plan in action.

The BJP tasted blood in 2019 when, for the first time ever, it won 18 of Bengal’s 42 Lok Sabha seats and a 41 per cent vote share. In no time, from being a fringe player, it became the principal Opposition party in the state. It vows to finish the job in 2021, an intention it has made clear in its slogan ‘Unishei half, Ekushe Saaf (half in 2019 and wipeout in 2021)’. And the victory in Bihar has only put more wind in its sails. 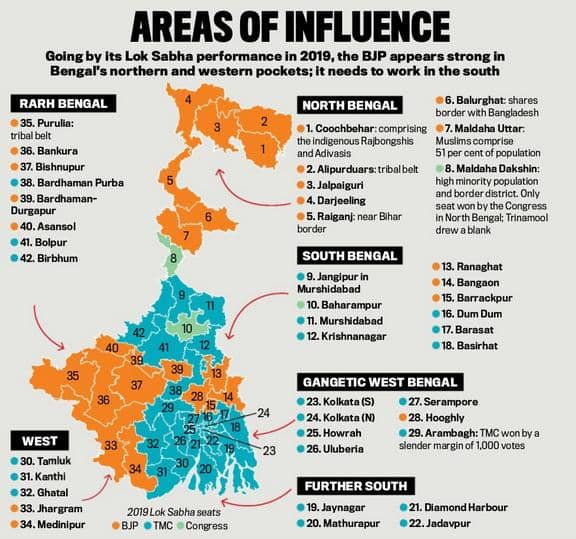