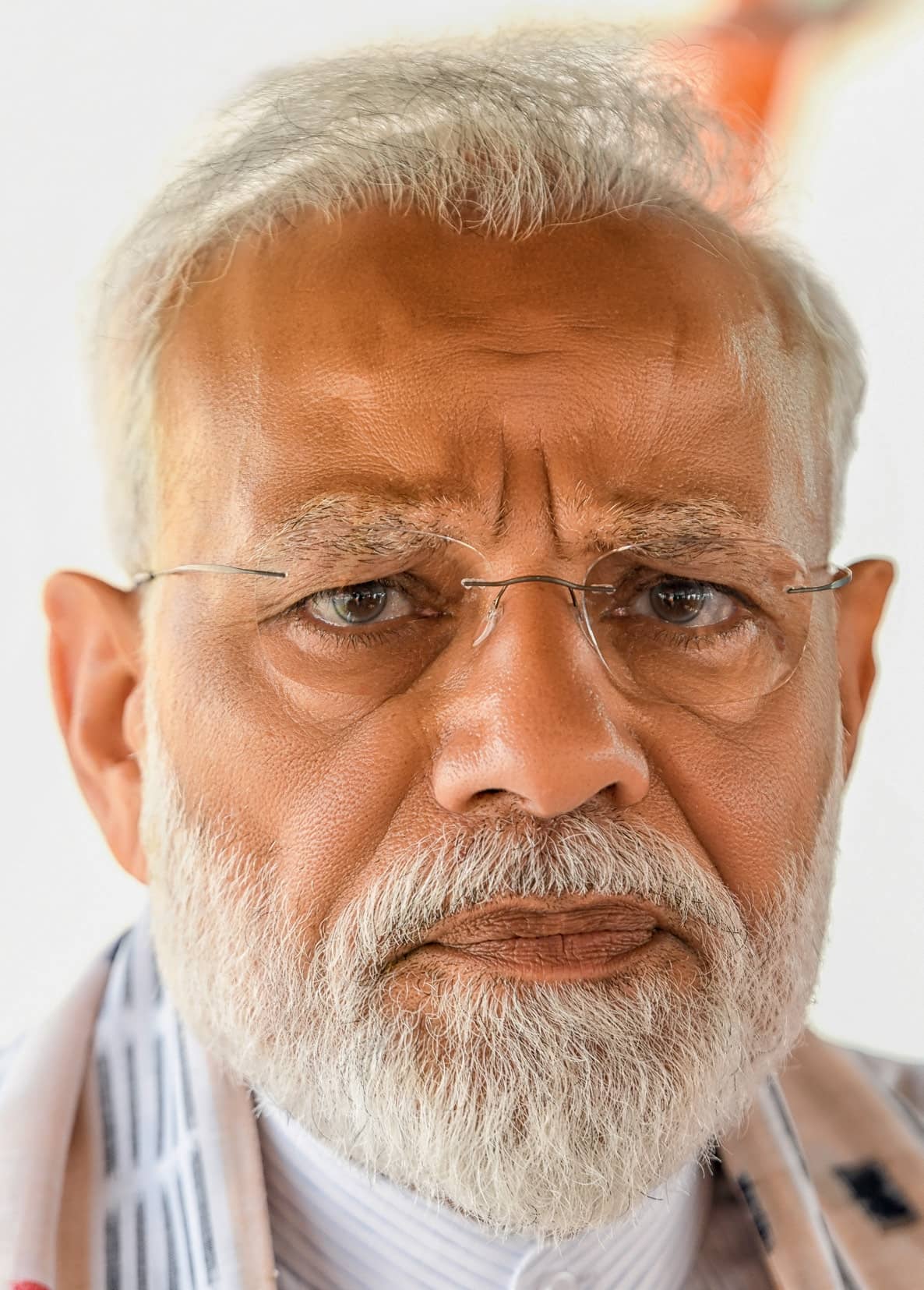 Seven months after being re-elected PM, Narendra Modi retains his popularity in our Mood of the Nation poll, but a slowing economy and CAA protests rob his government of its sheen, calling for course correction.
Raj Chengappa

For Narendra Modi, the contrast in perception about his leadership could not be as stark as it is now. Just seven months ago, the prime minister reigned supreme and was regarded as someone who could do no wrong. He had powered the Bharatiya Janata Party (BJP) to a stupendous win in the May 2019 general election, pulverising the opposition and becoming the first prime minister to secure back-to-back majorities in the Lok Sabha since Indira Gandhi in the 1967 and 1971 elections. Then, at the start of his second term, he set the audacious goal of doubling the size of the Indian economy to $5 trillion by 2024. In August, he decisively upturned the special status of Jammu and Kashmir by abrogating Article 370.

Seven months later, Modi, it seems, can do no right as he faces mounting criticism on several fronts. The prime minister’s efforts to shore up the flailing economy aren’t quite working, with the quarterly Gross Domestic Product (GDP) estimates falling to a new low. Modi and the BJP have also started losing their aura of electoral invincibility in recent months, conceding power in the Maharashtra and Jharkhand assembly elections to a new opposition combine and forced to form a coalition government in Haryana—a state the BJP had ruled so far with a clear majority.

Meanwhile, protests continue across the country over the perceived communal bias in the way the Modi government rammed through with the Citizenship (Amendment) Act (CAA) to help six non-Muslim minorities in three neighbouring Muslim-majority countries gain Indian citizenship and expressed its intent to have a countrywide National Register of Citizens (NRC) to root out illegal immigrants. As worrying for the government is the growing concern in influential international circles over human rights violations in Kashmir, manifest in the prolonged lockdown of the Valley, the detention of top Kashmiri leaders and the internet blackout.

These unsettling developments have resulted in a winter of discontent for Modi and his government, as the results of the India today-Karvy Insights biannual Mood of the Nation (MOTN) poll reflect. Were a Lok Sabha election held today, the survey tells us, the handsome 303-seat majority the BJP won in May 2019 would be reduced to 271—one short of a simple majority on its own, and a loss of 34 seats in seven months. 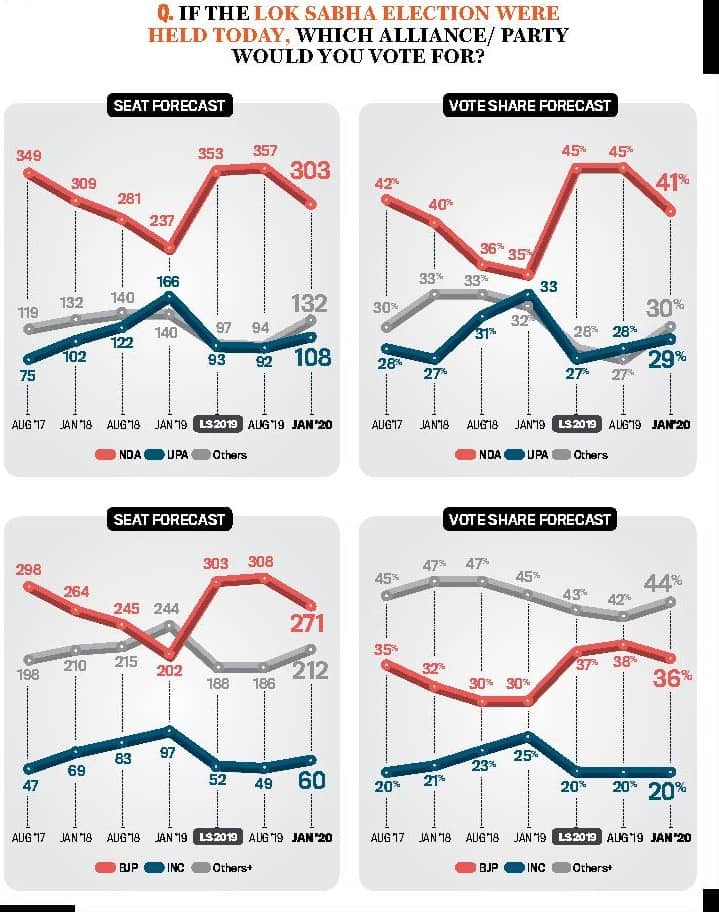 For the ruling National Democratic Alliance (NDA), the survey predicts a loss of 50 seats owing to the departure of the Shiv Sena and the widespread citizen unrest, but it will still have a stable majority with 303 seats. What should also give Team Modi pause is the finding that were opposition parties such as the Sena, the Samajwadi Party, the Bahujan Samaj Party and the Left to come together to form a new mahagathbandhan under the United Progressive Alliance (UPA), it would throw the political field wide open and the NDA’s majority would be severely tested (see: The Recipe for Unrest).

If there is one silver lining for Modi, it is that his personal popularity is still a high 68 per cent, even if it’s 3 percentage points less than the MOTN in August 2019. He remains the tallest leader in the country in popular perception, with a 40 percentage point gap between him and his nearest rival, Rahul Gandhi, in the prime ministerial stakes. Overall, however, the MOTN results are a clear warning to the prime minister that his honeymoon period with the electorate is over and that his government is beginning to lose its sheen. 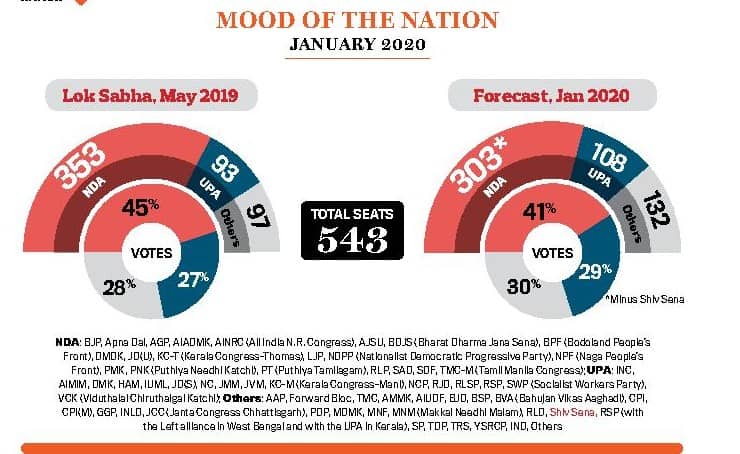