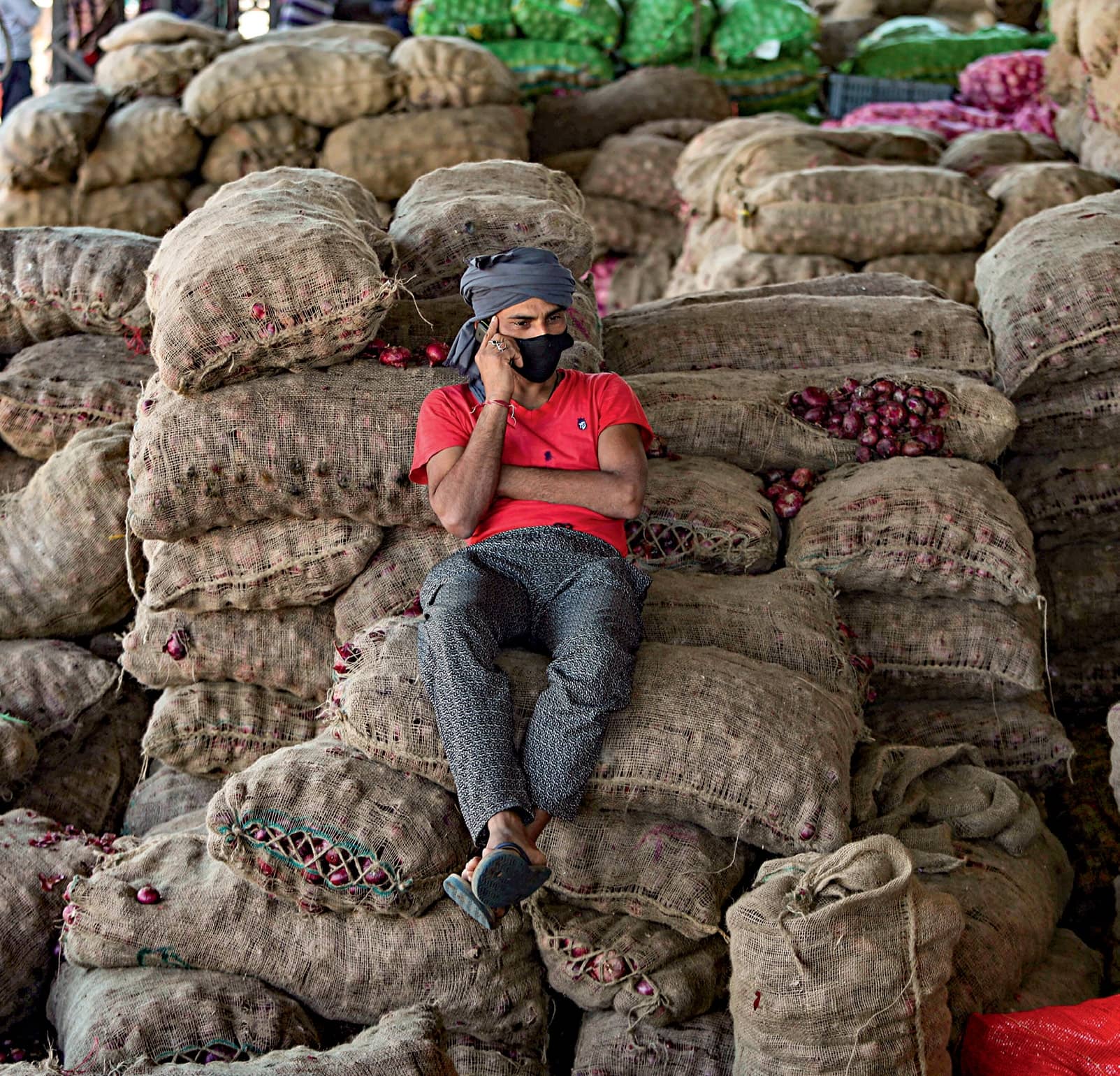 The lockdown has turned hopes of a bumper rabi harvest into utter gloom as the movement of labour and farm machinery comes to a halt. Reviving supply chains and a delayed crop will be the focus now

AJIT KUMAR JHA
Barely a fortnight ago, rural India appeared to be brimming with hope and optimism. Rabi crops like wheat, pulses, oilseeds, vegetables and fruits such as grapes, pomegranates and even the early mangoes appeared ready for a bumper harvest across the country. Even the March rains and hailstorms in some areas in the north had not disheartened the farmers. Amid the slowdown, agriculture appeared to hold out a glimmer of hope for a revival of the economy.

The COVID-19 pandemic and the resultant national lockdown put paid to all that. Overnight, that earthy rural optimism has dissipated into deep pessimism. The three-week-long officially imposed lockdown--which has brought to a screeching halt the movement of agricultural workers, temporary farm migrants, and farm and related machinery such as combine harvesters, threshers, tractors, trucks and other equipment–has set off panic in the villages and fears of a rural distress return. If the lockdown remains in place beyond April 14, the entire rabi crop in most states, dependent as it is on migrant labour for procurement and farm machinery for harvesting, would be devastated. If the Kharif sowing season in May-June, which is 100 per cent dependent on farmworkers, ends up being disrupted due to the extension of the lockdown, the entire agricultural system in the country would be on the brink of a disaster.

Perishables like fruits and vegetables have taken the worst hit. The lockdown has totally destroyed the market for these products. There are simply no buyers. Talk to the grape growers in Nashik in Maharashtra, 80 per cent of whom export their grapes, or the ones from Chikkaballapur in Karnataka; the mango farmers of the Konkan region; or the tomato and cucumber farmers of Nashik, the story is the same, a chronicle of rotting produce and misery.

Agriculture in Maharashtra and Karnataka had already been affected by unseasonal rains and a delayed winter. And now came the lockdown. February and March are when most farmers in the two states harvest crops like grapes, pomegranates and jowar. In grapes and pomegranates, initial estimates of losses are as high as 40 per cent of the produce. The individual stories are gut-wrenching.

In Sinnar, Nashik, grape farmer Manoj Thete finally destroyed his fully ripe crop as there are no labourers, transport or market for the produce. Thete had taken a loan of Rs 3.5 lakh to cultivate grapes on seven acres. He fears the investment has gone down the drain. “It is impossible to get labourers to cut the grapes,” says Thete. “I transported a few quintals to Uttar Pradesh, but they are rotting in the trucks there.”

Satish Ugale, a farmer from Dindori in Nashik district, took 100 crates of juicy capsicum from his farm to the agriculture produce marketing committee (APMC) in Nashik city on March 30. He was expecting at least Rs 100 for a crate (one crate holds 20 kgs). Instead, the trader offered him Rs 15 per crate. As it did not even cover his transportation cost, Ugale distributed the capsicum free to the poor people in the area. “It was better to feed the poor than the greedy trader,” says Ugale.

Augustine Varkey, a farmer in Chikka ballapur, Karnataka, dumped the grapes from his vineyard straight into the compost pit and then took to Twitter to tell his tragic tale. Rajaram Goverdhane, a farmer in Sanjegaon village of Igatpuri in Nashik, is feeding his cattle juicy tomatoes and fresh cucumbers nowadays (see ‘Let someone eat it’).