Rewriting The Rules of Engagement 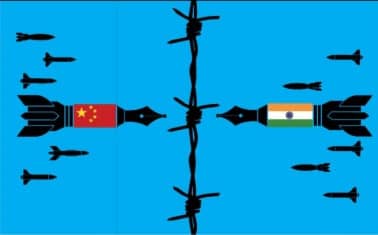 If you shed tears when you miss the sun, you also miss the stars.” This famous line by Nobel laureate Rabindranath Tagore reminds us of the need to stay sober and focus on the positives as tensions rise between India and China.

Tagore first visited China in 1924 at the invitation of renowned Chinese intellectuals Liang Qichao and Cai Yuanpei. He charmed his Chinese friends and audiences as he traveled and lectured from Shanghai all the way to Beijing. He developed close ties with Chinese scholars such as the poet Xu Zhimo and painter Xu Beihong. Tagore met Chinese scholar Tan YunShan in Malaya in 1927 and invited him to Santiniketan in West Bengal to teach. He helped Tan establish Cheen Bhavan (the China Institute) at VisvaBharati University in 1937. The TagoreTan friendship was a microcosm of India-China mutual admiration and cooperation. As bilateral relations plummet after a recent bloody border clash, one wonders whether the India-China friendship can be revived and sustained.

What happened on June 15, 2020, was truly tragic, with 20 Indians losing their lives and an undisclosed number of Chinese casualties in a scuffle at the Galway Valley. India and China have blamed each other for being aggressive and violating previous agreements. The fact is that over the past few years, both militaries have boosted their front positions and improved roads and other infrastructure along the border.

It is useless to point fingers, and the border disputes are unlikely to be resolved anytime soon due to complicated history, lack of demarcation and strategic rivalry. Both sides need to deescalate the tensions, curb nationalism at home, reflect upon what led to the tragedy and move forward. It is encouraging that even in great adversity, the two sides remain committed to solving the disputes through dialogue.

In dealing with the equally complex territorial dispute between Japan and China, China’s former leader Deng Xiaoping suggested that the smarter future generations might be able to resolve such difficult issues, and what the current generation could do is to shelve differences and seek cooperation. Whether or not one buys Deng’s reasoning, perhaps both India and China can learn from Deng’s pragmatism.

Lest they forget, the policy priorities for both India and China remain to promote domestic growth and eliminating poverty. Border disputes distract from what is more important for both countries.