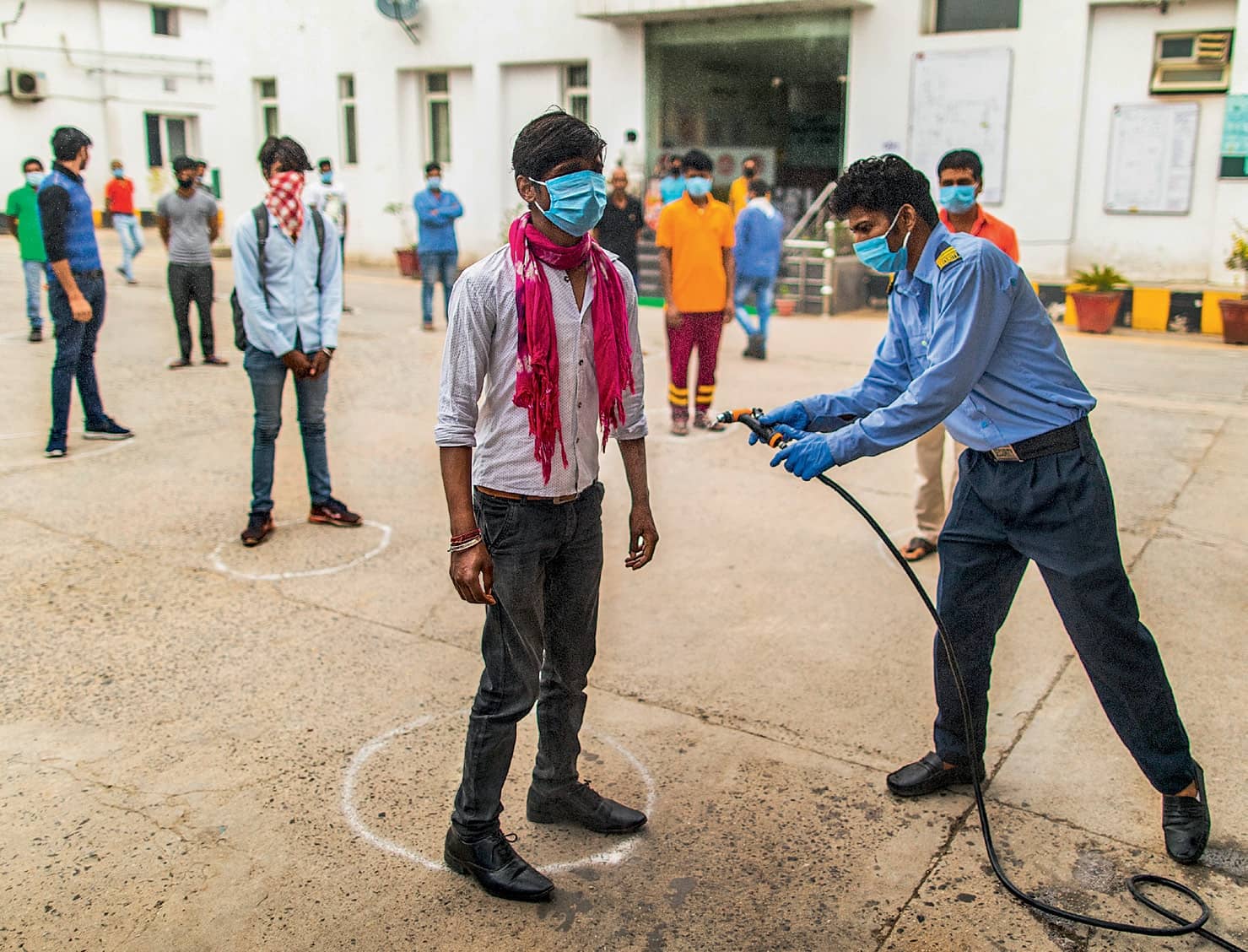 The government plan to stagger the reopening of businesses was well-intentioned, but complicated guidelines, supply chain disruptions and poor demand have played spoilsport

The number of districts across India classified as ‘hotspots’, or ‘red’ districts. The other classifications are ‘non-hotspots’ or ‘orange’ districts and ‘non-infected’ or ‘green’ districts

Dharmesh Kachiwala, 48, who runs a textile processing unit in Surat, is distraught as the national lockdown nears the one-month mark. Although the new guidelines from the Centre, announced on April 15, allow industrial units outside the COVID-19 ‘hotspots’ in Gujarat (such as in textile hub Surat) to resume operations from April 20, entrepreneurs like him aren’t taking any chances. “Surat’s textile trading market is closed, so where will we sell our products, even if we make them?” he asks. His firm, J.P. Kachiwala Textiles, supplies processed cloth to garment makers, who in turn export finished garments to larger firms such as British retailer Marks & Spencer. But even those businesses are now shut. “Once you start your plant, you have to keep operations going 24x7, else it becomes an expensive proposition,” he says. Having to pay salaries to 250 employees without any income is another burden.

Kachiwala and around 450 like him in the textile processing business in Surat are staring at a bleak future. So are the nearly 200,000 small and large powerloom units in Surat that supply cloth to the processing units. This is the case in almost all major industrial hubs in the country. The lockdown that began on March 25 may have slowed the spread of COVID-19, but has crippled India’s economy. Many analysts have predicted flat growth or even economic contraction in the first quarter of the current fiscal.

With this in mind, the Union ministry for home affairs (MHA) issued new guidelines on April 15 to allow at least some industries to restart operations. Industry body CII (Confederation of Indian Industry) had wanted the government to allow the textiles, garments and automobile sectors to begin work from April 20 to meet their export obligations. While a partial lifting of restrictions seemed an ideal way to get the economy going while halting the spread of the virus, the plethora of guidelines from the Centre, states and local administrations have not eased matters much. Add to these the disruptions in the supply chain, access to labour and the stalled demand, and the result is that most firms—even those outside COVID-19 ‘hotspots’, which were allowed to resume operations from April 20—have remained closed.

While industries in the ‘essential goods’ category already had permission to operate, the new guidelines allow several sectors to reopen. These include industries in rural areas, and manufacturing and industrial units with access control in special economic zones (SEZs), export-oriented units and industrial estates and townships. But there are a number of preconditions. For one, as far as possible, workers must stay on factory premises. If this proves impossible, factory owners must make their own transport arrangements for workers—and the vehicles used must operate at less than 40 per cent capacity to ensure physical distancing. Factory premises must be regularly sanitised. All workers entering or exiting must be thermal screened, must have medical insurance, and employers must discourage gatherings of 10 or more people. These restrictions mean that industries that do open face higher costs and difficult working conditions. But the biggest “disincentive”, as Anand Mahindra puts it, are directives that impose severe penalties on management, which may include punishment with imprisonment, if an employee is found to be COVID-19 positive. An MHA spokesperson clarified on April 22 that penalties would apply only if offences occurred with the “consent, cognisance or negligence” of the employer, but many feel this leaves room for unnecessary prosecutions.

Another issue is that firms in ‘hotspot’ districts must remain closed regardless. All districts in India have been put in one of three categories—hotspot or ‘red’ districts, non-hotspot or ‘orange’ districts and non-infected or ‘green’ districts. Across the country, 170 districts have been classified as hotspots. Of these, 42 are in Maharashtra, Tamil Nadu and Delhi—and these three states together account for about 30 per cent of India’s GDP. This means that despite the partial relaxation of the lockdown, industrial activity is likely to remain muted.

Moreover, the district collector, the fulcrum of local administration and directly in charge of measures to contain the pandemic, is likely to prioritise safety over easing restrictions, given that lives are at stake.

Since the MHA’s notification on April 15 permitted industries outside ‘red’ districts to begin operations from April 20, there were hopes that some firms would quickly restart work. But the response from industry has been tepid. R.C. Bhargava, chairman of Maruti Suzuki, says his company is not in a position to start work at all. “The car industry depends not just on the factories that assemble the cars, but on the entire supply chain. Any disruption in that and we will not be able to manufacture the final product,” he says. For example, Maruti Suzuki makes engines at its plant in Gurgaon—a hotspot—which is closed. Without those engines, its Manesar plant (which assembles cars), cannot work. These plants, in turn, are connected to a network of over 300 suppliers. Production also depends on sales—and dealerships across the country are closed.

This integrated nature of modern manufacturing makes it impossible for plants to operate in silos. This is why steel companies, including JSW Steel, Tata Steel and SAIL, have had to drastically cut production, although steel-making is a ‘continuous process’ industry and was allowed to maintain operations. Strict labour norms and a lack of demand also played spoilsport. JSW Steel, which has six plants in India, was operating them at the bare minimum capacity. “Everything was closed. Getting inputs, getting workers to factories and despatching the final product, [all of it] was impossible,” says Seshagiri Rao, joint managing director and group CFO, JSW Steel. He says that if business is to normalise, the entire supply chain has to be opened up and demand also has to recover. “If allowed, production levels can be normalised very quickly, but restrictions have to be eased across the country,” he says. In a similar vein, UltraTech Cement—a leading cement manufacturer from the Aditya Birla Group, with 19 plants across the country, including in Rajasthan, Andhra Pradesh, Maharashtra, Himachal Pradesh, Madhya Pradesh and Chhattisgarh—says that it has only “partially resumed” operations.

Rajiv Bajaj, MD of Bajaj Auto, terms the lockdown the most severe amongst all economies and wants the government to review its response to the pandemic. “What has been started by the virus has been compounded by notso-smart action by the government,” he told India Today TV, adding that the government’s ‘draconian’ conditions for re-starting were big roadblocks.