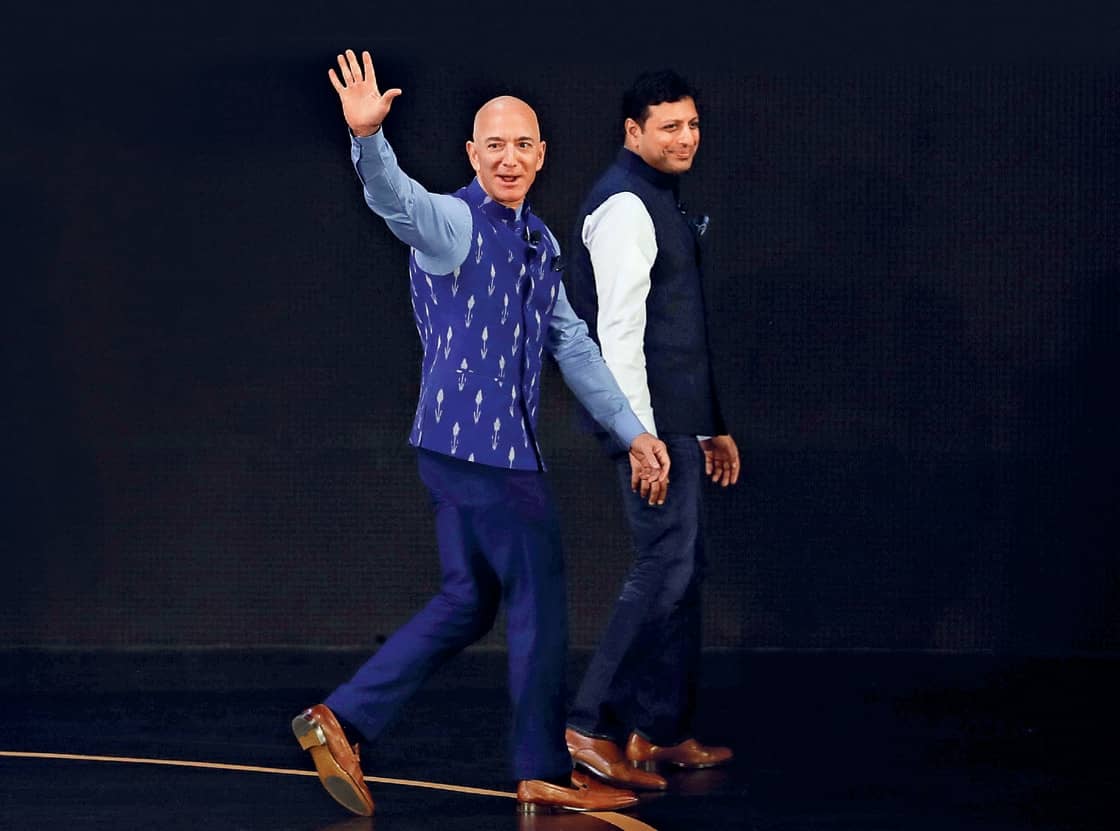 THE GOVERNMENT’S COLD SHOULDER TO AMAZON BOSS JEFF BEZOS HIGHLIGHTS ITS AMBIVALENCE ABOUT LARGE FOREIGN E-COMMERCE FIRMS, AND THE CONTRARY PROTECTIONIST PULL IN ITS SUPPORT BASE
M.G. Arun and Anilesh S. Mahajan

On October 3, 2014, 7, Lok Kalyan Marg in New Delhi, the official residence of the prime minister, was preparing to host a special guest. Billionaire Jeff Bezos, founder and CEO of the world’s largest online marketplace, Amazon, was scheduled to meet Narendra Modi, just months after the latter had assumed office. “He (Modi) has a fantastic international reputation. I am super excited to meet him,” Bezos said ahead of the meeting. This followed an announcement of an investment of $2 billion by Bezos’s company in India, as it took on home­bred e­tailer Flipkart. India, with its burgeoning middle class, was an exciting new place for Amazon to grow. To put it in Bezos’s words, India was “super­energising”.

Cut to January 2020. The 56­yearold’s visit caught national attention yet again, but for all the wrong reasons. Not only did the world’s richest man get the cold shoulder from the Modi government, but Amazon also had to go through the ignominy of being accused by commerce minister Piyush Goyal of “predatory pricing”.

On January 16, a day after Bezos announced another $1 billion investment in India—ostensibly to help small and medium businesses sell their products—Goyal commented that the e­tail giant was not doing any favors to India. He accused Amazon of pumping in money to cover its losses in India. “How can a marketplace make such big losses unless they are indulging in predatory pricing or some unfair trade practices? These are real questions that will need answers,” he said. Although Amazon has invested money in warehousing and certain other activities over the past few years, if it is bringing in money largely to finance losses in an e­commerce marketplace model, it does raise questions.

Not surprisingly, Bezos chose to ignore the minister’s tirade and instead said the next day that the firm would create one million jobs in India over the next five years, which probably led to a calming of nerves. Goyal later clarified that all investments were welcome as long as they adhered to Indian laws. However, by then, it was obvious that all was not well between the government and large e­commerce players. There was criticism that the Modi government had snubbed the Amazon boss because of the bad press it was getting in the Bezos­owned Washington Post but, to be fair, Goyal also refused to meet Walmart International CEO Judith McKenna at Davos on January 21, citing conflicting schedules.

This is not the first time e­tailers have come under government scrutiny. In December 2018, a new set of FDI guidelines in e­commerce had kicked up a lot of dust. In a circular, the De­partment for Industrial Policy and Pro­ motion (DIPP) barred online retailers such as Flipkart and Amazon (benefi­ciaries of 100 per cent FDI) from selling products of companies in which they own stakes and also from entering into exclusive deals for merchandise/ sale of products on their sites.