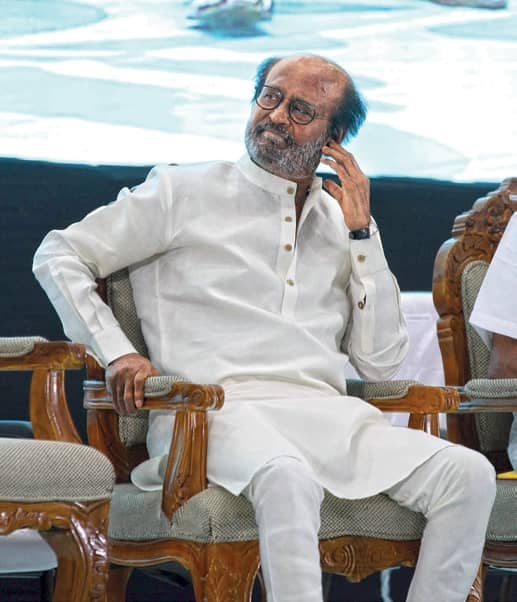 The Tamil superstar shows a soft Hindutva side as he readies to take on the Dravidian majors
Amarnath K. Menon

On January 14, Tamil superstar Rajinikanth targeted the Dravidar Kazhagam (DK)—the springboard that launched both the Dravida Munnetra Kazhagam (DMK) and the All India Anna Dravida Munnetra Kazhagam (AIADMK)—by criticizing party ideologue, the revered late ‘Periyar’ E.V. Ramasamy. Rajini’s focus was on Periyar’s distaste for Hindu deities and forms of worship. Expectedly, the Dravidian parties took umbrage, but the superstar refused to back down.

On February 5, the actor and wannabe politician called the media to declare that certain political parties were instigating protests against the Citizenship (Amendment) Act or CAA for political gains and that the National Population Register (NPR) was “very essential”. Just so happens that the release of a new Rajini-starrer— Thalaivar 168—is round the corner, and a cursory look at the script of the past couple of years indicates that Rajini’s interest in politics perks up every time a new film is due out.