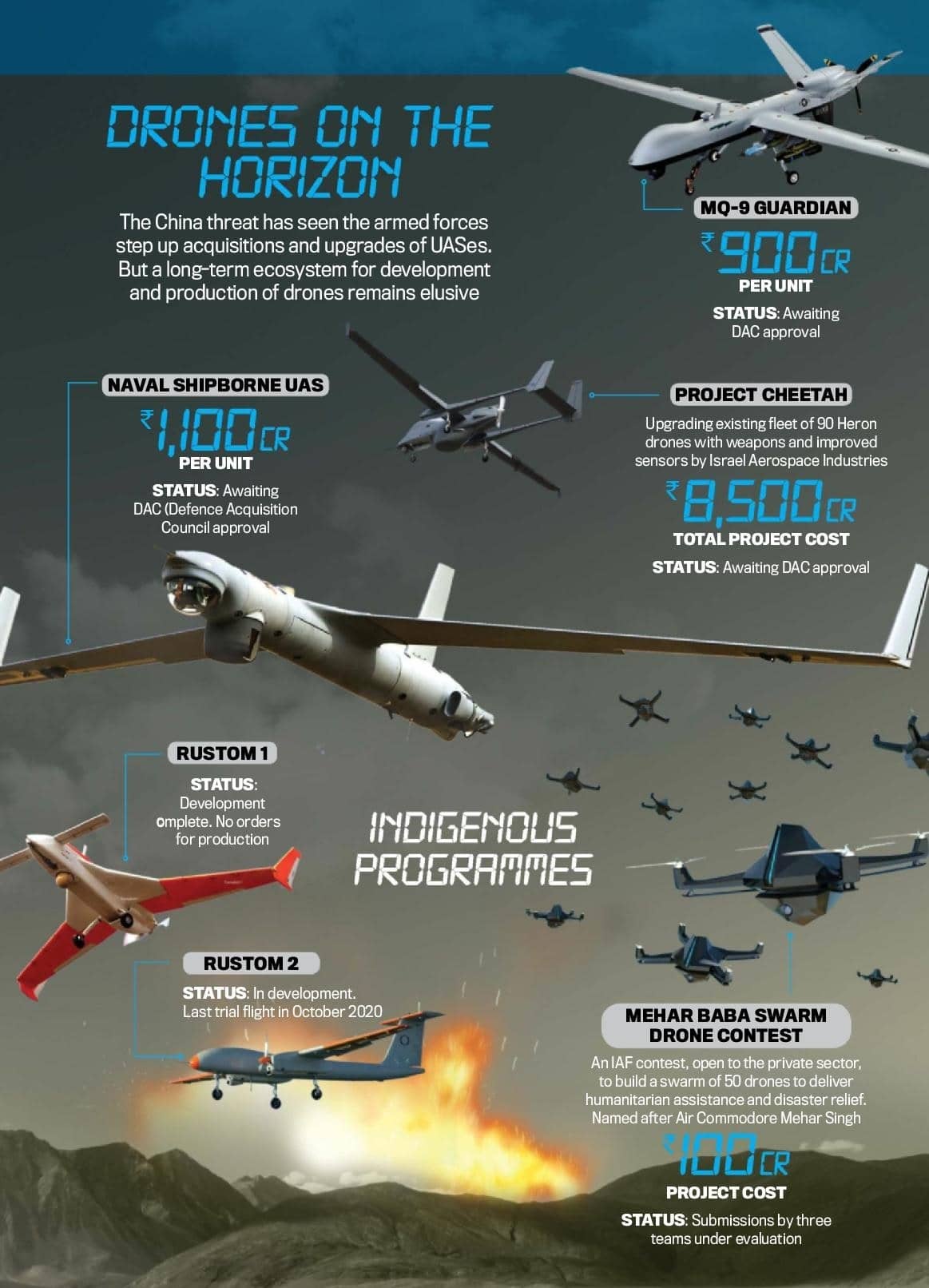 THE ARMED FORCES, BEHIND THE CURVE ON WEAPONISED DRONES, ARE RUSHING TO FILL THE GAP THROUGH IMPORTS. THE TOUGHER ASK, THOUGH, IS TO DEVELOP AN INDIGENOUS ECOSYSTEM FOR THESE MUST-HAVE PLATFORMS

India’s military standoff with China in Ladakh, now in its sixth month, has resulted in an increased focus on equipping the armed forces. One piece of hardware has topped the acquisition wishlist of all three branches of the armed forces—drones. The urgency with which these weapons systems are now being acquired—via fast-track purchases and deliveries in months, not years—speaks of the growing importance being attached to these force multipliers.

The army is looking for man-portable surveillance drones that can operate at the rarefied altitudes of its northern theatre. It also wants bigger, armed drones that can target terrorist camps across the Pakistani border with precision missiles. The navy hopes to close a fast-track contract to acquire 10 UASes (unmanned aerial systems) that can operate off its warships, before the end of the financial year. The three services will get their first weaponised drones in an off-the-shelf purchase of six MQ-9B Guardians from the United States. The deal is worth over Rs 4,000 crore, with an option to buy 18 more over the next few years. The contract closest to being signed, however, is the Rs 8,500 crore Project Cheetah, to upgrade the ‘Heron’ medium-altitude long-endurance drone fleet with all three services. The defence ministry has finished price negotiations with Israel Aerospace Industries (IAI) for the upgrade—this will convert the fleet of primarily ISR (intelligence, surveillance and reconnaissance) drones, acquired over a decade ago, into weapons platforms. The project, which will equip them with satellite navigation, air-to-ground missiles and precision weapons, is awaiting sanction from the cabinet committee on security (see Drones on the Horizon). These proposals will see the armed forces collectively spending over Rs 36,000 crore ($5 billion) over the next few years.

Drones, both armed and unarmed, have been a feature of major wars in Asia and Africa in recent years, from ISIS in Syria rigging small drones to drop grenades to the ongoing civil war in Libya, where both sides have been using combat drones. Drone technology has also seen a steady increase in sophistication and effectiveness. The attack on Saudi Aramco oil refineries on September 14, 2019, attributed to Houthi rebels in Yemen, showed both their lethality and the ease with which even non-state actors can make use of them. The ongoing war between Azerbaijan and Armenia—the first armed conflict between two countries in over a decade—has demonstrated the devastating potential of drones in uncontested airspace. Azerbaijan’s fleet of Turkish-built armed UASes have pulverised tanks, trucks and fortifications. Armed drones, clearly, are the force multipliers of today, not of some distant battlefield of tomorrow.