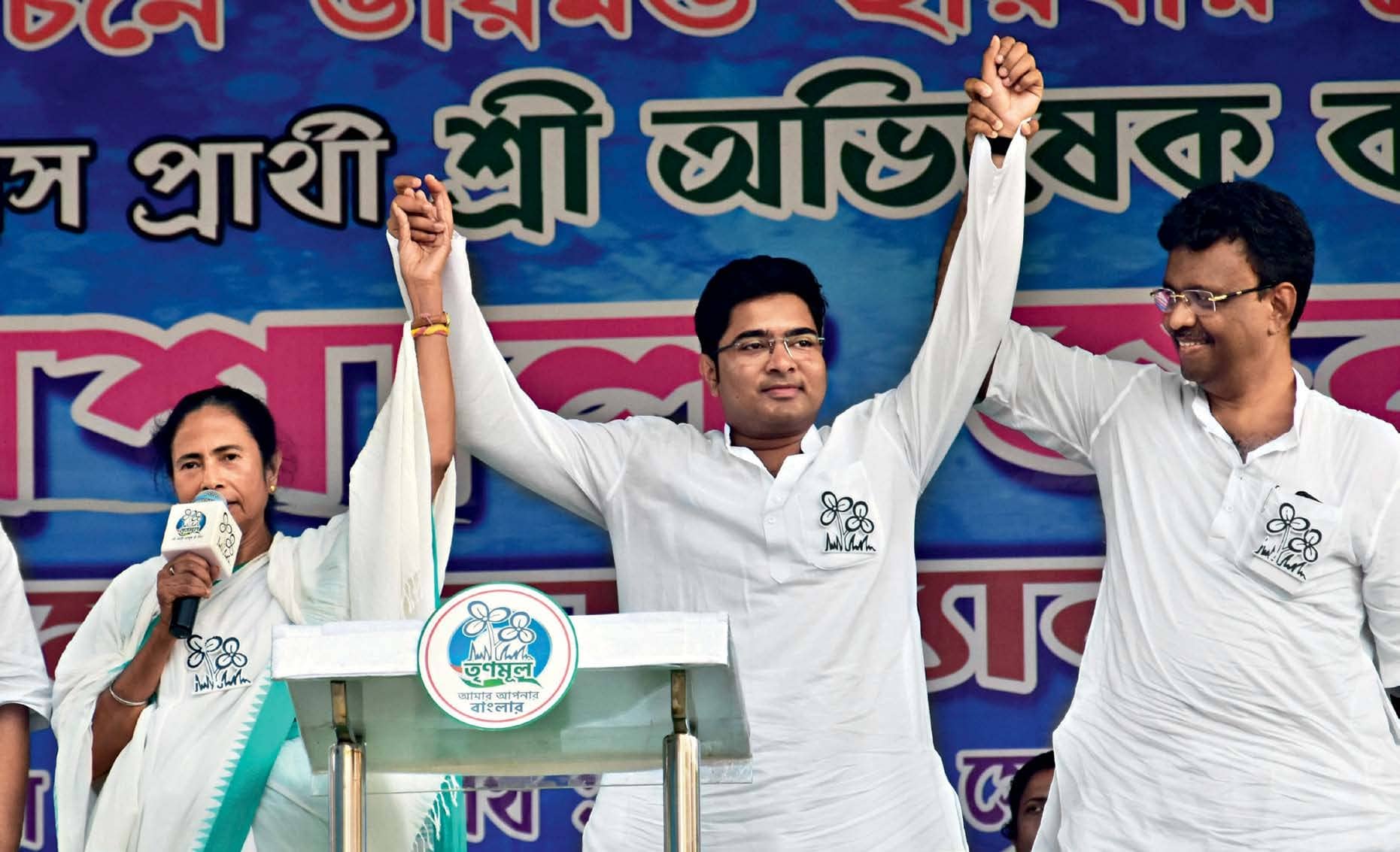 MAMATA’S NEPHEW ABHISHEK BANERJEE HAS TIGHTENED HIS GRIP ON THE PARTY, AND IS EFFECTIVELY THE STRATEGIC HQ OF THE TRINAMOOL CONGRESS FOR THE BIG ELECTION BATTLE OF 2021

An alert pings on the phone and a hush descends on the conference room where moments ago MPs, MLAs and cabinet ministers were chattering away. Those puffing away in the smokers’ zone stub their cigarettes and rush to their seats. Policemen in plainclothes outside the Trinamool Congress Bhawan on Kolkata’s Eastern Metropolitan Bypass cordon off the 50-odd supporters, allowing an eight-car motorcade to roll in. A black Toyota Fortuner halts outside the main entrance and the ‘Yuvaraj (prince)’ of Trinamool Congress (TMC), Abhishek Banerjee, steps out and makes his way inside. A few party seniors rise on cue. A quick word with two veteran leaders and the hall slips into an oppressive silence.

The contrast is stark between Mamata, who likes to make a point about her simple, bordering on the austere, lifestyle and her nephew, for whom flamboyance is second nature. Or in Didi’s friendly, approachable demeanour and Abhishek’s reserve and studied reticence. Mamata has worked her way up in politics—from student leader to Union minister to chief minister. Abhishek is accused of getting success on a platter, on the back of Didi’s popularity and the hard work of TMC veterans.

THE RISE OF ABHISHEK

It is Abhishek’s writ that runs in the TMC, whether it’s party management, candidate selection, duty delegation or resource mobilization. During the 2018 panchayat election, when Abhishek gave the call for an ‘opponent-less panchayat’, the TMC won more than 30 per cent seats unopposed. Even the jolt suffered by the TMC in the 2019 Lok Sabha election—winning only four more seats than the BJP (22 of 42, as opposed to the BJP’s 18)—did not weaken Abhishek’s clout. It is Abhishek who is in charge of crafting the party’s strategy for the 2021 assembly contest, for which he engaged Prashant Kishor and his IPAC (Indian Political Action Committee) last June. He is also leading the TMC’s ‘Jubo Shakti (youth power)’ campaign, raising an army of ‘youth warriors’.

The son of Mamata’s brother Amit and wife Lata and the eldest of Didi’s eight nephews and nieces, 32-year-old Abhishek had been exploring a career in Delhi after studying at the Indian Institute of Planning and Management. He was never active in student politics or part of Mamata’s Singur and Nandigram agitations in 2006-07. “Abhishek made guest appearances at Mamata’s dharnas at Esplanade (Kolkata) or in Singur a few times. No speeches on a public platform, no experience of organising rallies,” says a veteran TMC leader. It was Suvendu Adhikari, then president of the TMC youth wing, who was at the forefront of the Nandigram agitation and instrumental in loosening the stranglehold of the Left in some rural districts of the state. It was to rein in Adhikari, reportedly on the advice of her then confidant Mukul Roy, that Mamata floated a new youth organisation, the Trinamool Yuva, in 2011, and made Abhishek its president.

Abhishek ran Trinamool Yuva as a corporate outfit. Membership was given for Rs 30 and caps, T-shirts, banners and bandanas, with ‘Yuva’ inscribed on them, flooded the market. “The organisation gained visibility with hoardings and other paraphernalia. It made Rs 28 crore from membership, but [no real] impression in terms of political activity,” claims Arjun Singh, a former TMC member and now BJP MP from Barrackpore.