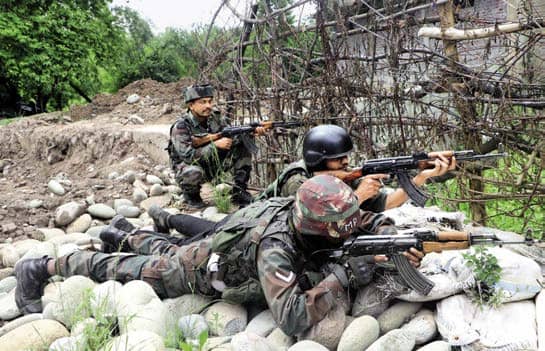 Hizbul Mujahideen, the separatist militant outfit active in Jammu and Kashmir since 1989, maybe in terminal retreat.

The past five months have seen a decimation in their numbers, with the J&K police claiming that of the 94 militants taken out by the security forces during this period, as many as 51 were from the Hizb alone. The week to June 14 was the bloodiest, claiming 19 Hizb men in five encounters in southern Kashmir. The strikes in Shopian, Kulgam and Pulwama, considered the epicenters of homegrown militancy, have shaken the three-decades-old outfit to the core. “The security forces are on top and the tanzeems (militant outfits) are on the run,” says Zulfiqar Hassan, additional director general of the Central Reserve Police Force (CRPF). “Hopefully, this will have a demoralizing effect on the youth, prevent them from joining militancy and we will have a peaceful summer.”

For the Hizb, the losses have really mounted since their longest-serving leader Riyaz Naikoo was killed on May 6 in a joint operation of the police, army, and the CRPF in Beighpora village of Pulwama. The 35-year-old operations chief had held the outfit together amid crucial defections and growing calls for the establishment of a caliphate in 2017. Close on the heels of Naikoo’s death came the killing of Junaid Sehraie on May 20, the son of Tehreek-e-Hurriyat chief Mohammad Ashraf Sehraie, and a divisional commander of the outfit.

Successive encounters since have claimed more commanders, including Afghan war veteran and IED (improvised explosive device) expert Abdul Rehman alias ‘Fouji Bhai’ of the Jaish-Mohammad. Lauding the security forces for the successful operations, J&K Director General of Police Dilbag Singh said six top militants have been taken out since May. “The list of their crimes is long and their elimination will bring great relief to the people of south Kashmir,” he said.

The week to June 14 has been the bloodiest, claiming 19 Hizb men in five encounters in south Kashmir. The strikes in their stronghold have shaken the core