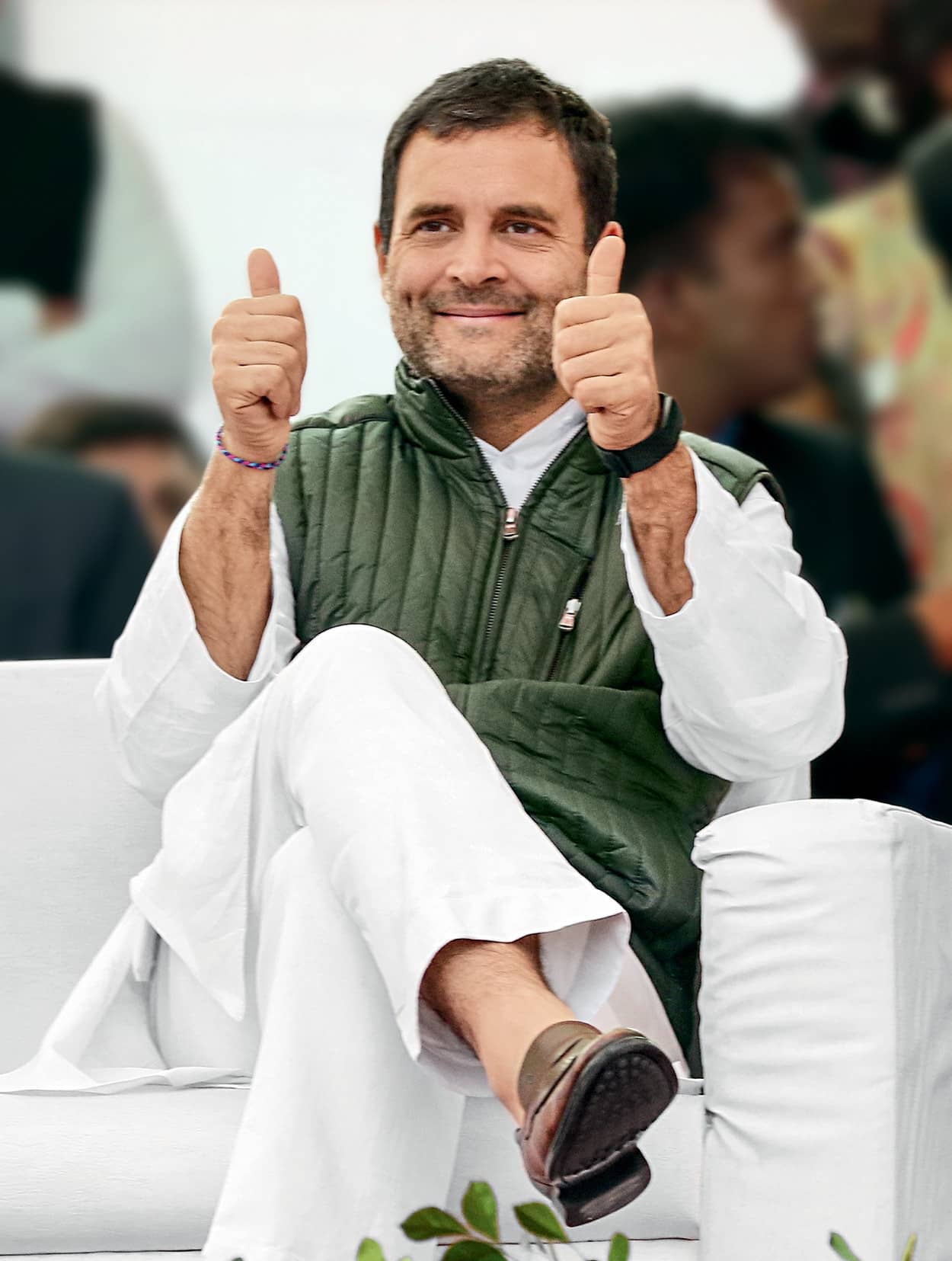 Rahul Gandhi’s minimum income guarantee promise to the country’s poorest has caused more than a flutter in the BJP camp. Will the Rs 3.6 lakh crore scheme prove to be the Congress’s trump card or is it just empty talk?

It was a chilly winter evening in 2016. India was debating demonetisation while Uttar Pradesh—electorally the most significant state in the country—was gearing up for assembly election a few months away. Congress president Rahul Gandhi had just returned from the state after “witnessing people’s hardships” because of the Narendra Modi government’s decision to render two high-value currency notes illegal. He called some of his party’s top leaders and asked them what they thought of the feasibility of a direct cash transfer scheme to ensure a minimum income for India’s poor. A little over two years later, the Congress has not only firmed up this idea, but also offered it as its biggest promise ahead of the 2019 Lok Sabha election. On March 25, Rahul announced that if voted to power at the Centre, a Congress government would unconditionally give 20 per cent of the country’s poorest of poor households a sum of Rs 72,000 annually or Rs 6,000 every month. He claimed the Congress’s Nyuntam Aay Yojana (NYAY), or minimum income guarantee (MIG) scheme, would benefit 50 million households or approximately 250 million people (assuming five members per family).

Given its scale and scope, NYAY is arguably the most ambitious and encompassing social welfare programme ever announced—if only as a campaign manifesto. Going by plain arithmetic, NYAY will cost the exchequer Rs 3.6 lakh crore a year—1.8 per cent of India’s GDP. Announced just 17 days before the first phase of voting, NYAY might prove to be the election game-changer. In the see-saw struggle to ‘control the narrative’, Rahul has won this round. Last December, the Congress defeated the BJP in the Hindi heartland states of Rajasthan, Madhya Pradesh and Chhattisgarh. Buoyed by the victories, the party raised the pitch against Prime Minister Modi on the issues of unemployment and the agrarian crisis, forcing the Union government to up the ante with economic populism—announcements such as 10 per cent reservation for upper caste poor in jobs and education and a Rs 6,000 a year dole for small and marginal farmers under the PM Kisan Samman Nidhi Yojana. Then, Pulwama happened. The massacre of 40 paramilitary troopers in a suicide attack on February 14 and India’s subsequent air strike in Pakistan’s Balakot shifted the mood of the nation and the public conversation to patriotism and national security, allowing Modi to regain the upper hand.

As the BJP sought votes in the name of the Balakot raid, the Congress unleashed its own form of surgical strike to alter the narrative. There is no attempt to camouflage the electoral positioning. As Rahul says: “Dhamaka hai yeh, bomb phatega [It’s a big bang, a bomb will explode]. This is the Congress’s surgical strike on poverty. They [the BJP] worked to eliminate the poor, we will eliminate poverty.” His colleagues are naturally upbeat about the announcement. “Rahul Gandhi has effectively brought up this issue to make it a talking point instead of the air strike in Balakot,” says Rajasthan deputy chief minister Sachin Pilot.

The BJP understands the political implications of this scheme and lost no time in raising a united campaign against it. BJP leaders are taking pains to amplify the message that the Congress doesn’t have the ability or intent to implement NYAY and that the Modi government has already provided more than what Rahul’s scheme promises to the poor. Finance minister Arun Jaitley called it a “bluff” announcement, saying that schemes worth Rs 5.34 lakh core were already running for the poor. “The loan waiver promises of the Congress in Punjab, Chhattisgarh, Rajasthan, Madhya Pradesh and Karnataka remain undelivered and prove what a bluffmaster the Congress is,” says Jaitley.

Even some anti-BJP parties have slammed Rahul’s ambitious plan as an election gimmick. “This has to be treated as election-time promises. I don’t think this is going to be a poll issue,” says Saugata Roy, Trinamool Congress MP. Biju Janata Dal leader Kalikesh Singh Deo agrees that it’s a good concept, but doubts its feasibility. “The Congress is silent on how it’s going to be implemented. The public cannot be fooled. As it is the Congress has low credibility among the people,” he says.

Janata Dal (United) general secretary K.C. Tyagi claims that it’s difficult to connect voting patterns to welfare schemes. “In 2009, the Congress bagged just 27 per cent votes of the economically weaker sections despite effectively implementing MNREGA (Mahatma Gandhi National Rural Employment Guarantee Act),” says Tyagi. Amit Malviya, who heads the IT cell of the BJP, refers to the previous big promises made by the Congress that cut no ice with the voters. “In the 2014 Lok Sabha campaign, the Congress had talked about a food security bill. The voters did not respond to that,” says Malviya.

Despite the inevitable posturing, the BJP has reasons to worry. Political observers contend that in the December assembly elections, the farm loan waiver promise significantly boosted the Congress’s chances. The BJP’s rural tally declined by 31 per cent in MP, 57 per cent in Rajasthan and 68 per cent in Chhattisgarh. India has at least 290 rural and 131 semi-rural Lok Sabha constituencies out of the 513 for which a categorisation was done based on Census 2011 data. Constituencies where the urban population is less than 25 per cent are rural while semi-rural constituencies are those with an urban population equal to or higher than 25 per cent but under 50 per cent. 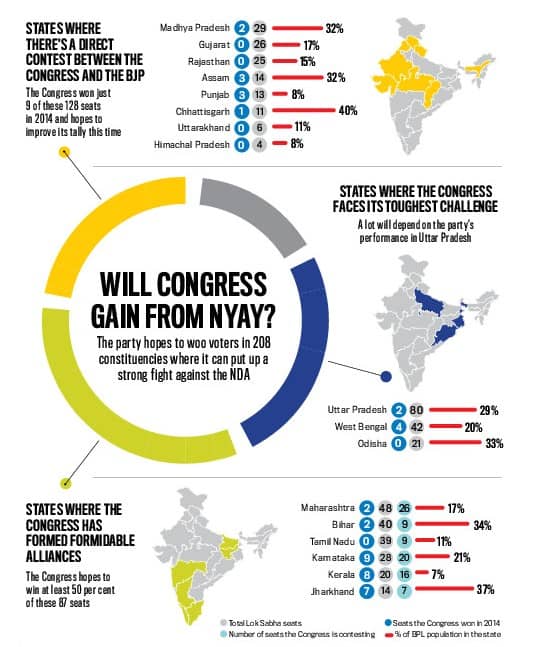 In the 2014 Lok Sabha election, the BJP won 156 rural and 69 semi-rural seats. In other words, 80 per cent of its tally of 282 seats came from rural and semi-rural areas. For the Congress, 32 of its 44 seats—73 per cent—came from such areas. In at least three of the top five states by number of Lok Sabha seats, rural and semi-rural seats account for the lion’s share—74 out of 80 in UP, 33 out of 48 in Maharashtra, 32 out of 42 in West Bengal, 39 out of 40 in Bihar and 23 out of 39 in Tamil Nadu. What may potentially add to the BJP’s troubles is that NYAY, unlike MNREGA or farm loan waiver promises, is not restricted to the rural areas alone.