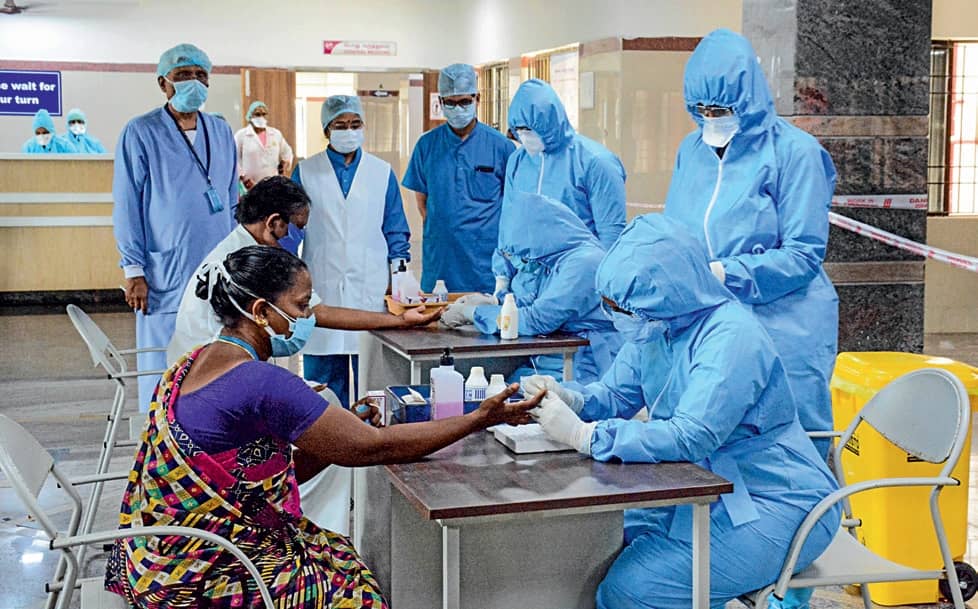 The furore over Chinese rapid antibody testing kits reveals a number of problems, from ‘faulty’ equipment, long supply chains, disagreements on interpretation and even crisis-profiteering

On April 16, a special Air India cargo flight landed in New Delhi, carrying a consignment of 276,000 rapid antibody testing kits from Guangzhou Wondfo Biotech, a Chinese medical technology firm. Designed to test for possible exposure to COVID-19 by detecting the presence of antibodies in blood samples, the arrival of these kits was greeted with much enthusiasm. They were expected to play an important role in India’s efforts to map the spread of the virus.

India, which had tested 770,764 samples as on April 29, is still far from reaching the testing rates of countries like South Korea or the US, which have preferred mass testing over lockdowns. Both those countries have made wide use of rapid antibody tests, one of the reasons their testing numbers are so high.

Suresh Kulandaivel, director of Matrix Labs, Chennai, which holds a licence from the Drugs Controller General of India (DCGI) to import the testing kits, had been awaiting the shipment for almost a week. “There were some delays in custom clearances,” he says. His relief at their arrival was to be short-lived. Once received, the Indian Council of Medical Research (ICMR) in Delhi distributed them to states across the country; but soon, complaints started pouring in from Rajasthan, Maharashtra and West Bengal, disputing the accuracy of the results these kits provided.

Rajasthan, which received 30,000 kits, used them to test a number of samples, of which 36 were found to be positive. However, follow-up confirmatory tests using the PCR (polymerase chain reaction) method turned out negative. To clear up the matter, Rajasthan additional chief secretary of health Rohit K. Singh set up a committee of doctors and microbiologists to investigate. They administered the antibody test to 168 patients who had tested positive for COVID-19 via the PCR method at least eight days prior—long enough for antibodies to have appeared in their blood samples. The Chinese test kits identified only ninc of them as COVID-19 positive. A notice was then sent to the ICMR, informing the agency that the kits had an accuracy of just 5.4 per cent.

On March 27-28, the ICMR had cleared a tender for 500,000 kits from Wondfo, with another 250,000 kits being ordered from another Chinese firm, Zhuhai Livzon Diagnostics. The agency says these kits were being procured at the request of states. On April 5, after the ICMR had placed its order, researchers at Oxford University found that a batch of Wondfo kits, which the UK had placed an order for, did not perform well or meet the criteria for a reliable test. The UK reportedly paid $20 million for around 2 million kits and is now hoping for a refund. “If we were procuring kits from China and questions about their quality were being raised globally, more due diligence should have been done,” says Malini Aisola, co-convenor of the All India Drug Action Network (AIDAN).

THE ICMR HAS ASKED STATES TO STOP USING THE KITS IT HAD PROCURED, SAYING THEY WERE FOUND TO BE UNDERPERFORMING

However, the tender for the 500,000 kits from Wondfo did include a key clause which stated that the ICMR reserved the right to do random-lot testing or pre-shipment testing for quality. “I was surprised when I heard [that countries are] depending so heavily on antibody testing,” says

Leena Menghaney, regional head for Médecins Sans Frontières, who has worked closely on HIV and viral hepatitis diagnosis in India. “In the past, [when using antibody kits to test for] viral hepatitis, we found that judging the quality of such kits is difficult and that they have had a history of high false negatives.”

According to the terms of the ICMR tender, any item found not acceptable would be returned and was to be replaced in a timely manner. Whether the agency performed random-lot tests on the 276,000-kit consignment when it was received on April 16 is uncertain. The ICMR did not respond to enquiries on this point.

WHERE DID WE GO WRONG?