DESI UNICORNS IN A DRAGON-HOLD 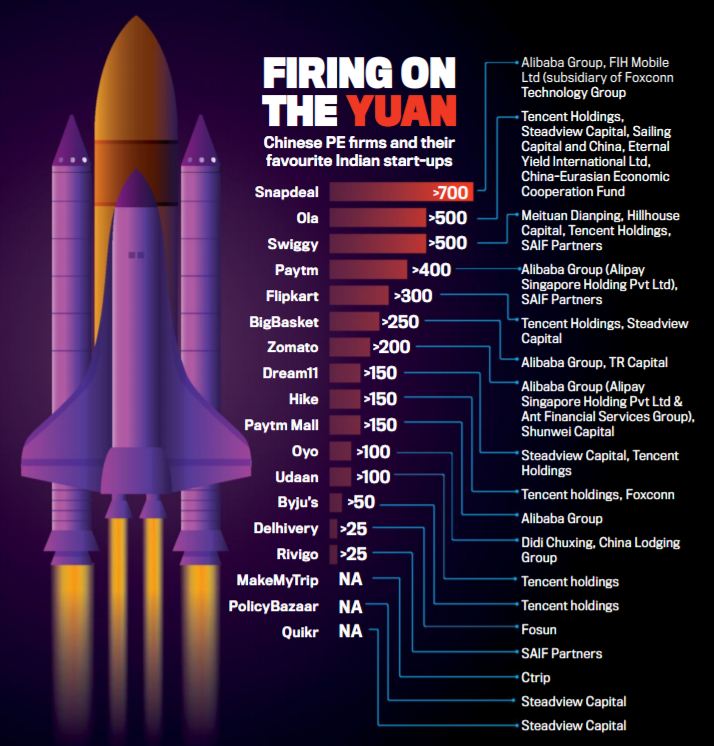 Chinese firms funded Indian start-ups when domestic sources failed to put in big money. It is not easy to scoff at their contribution or wish them away

The Indian start-up story has caught the fancy of global investors over the past few years owing to their sheer numbers and potential in a largely untapped market. In 2019 alone, India added 1,300 technology start-ups, taking the country’s total to close to 9,300, says IT industry body Nasscom. India is now the third-largest start-up ecosystem in the world, which explains why one country across the border has pumped in over $6 billion into the sector over the past few years. According to data analytics firm GlobalData, Chinese investments in Indian start-ups have grown 12 times over the past four years to $4.6 billion (Rs 34,500 crore) in 2019, from $381 million (Rs 2,857 crore) in 2016, with a majority of unicorns (start-ups that command $1 billion or around Rs 7,500 crore in valuation) being backed by corporates and pure-play investment firms from China.

The domination is underlined by the fact that 18 out of 30 unicorn Indian start-ups are funded by Chinese investment firms such as the Alibaba Group. Alibaba and its affiliate Ant Financial, along with others, invested over $2.6 billion in four Indian unicorns—Paytm, Snapdeal, BigBasket and Zomato— while Tencent and others invested more than $2.4 billion in five unicorns—Ola, Swiggy, Hike, Dream11 and Byju’s.