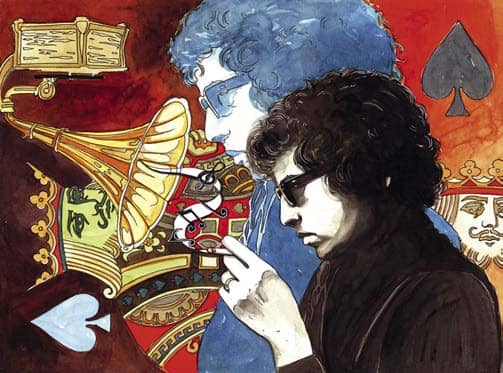 IF BOB DYLAN’S SONGS WERE SCRIPTURE, THE DOCUMENTARY IF NOT FOR YOU PROVES KOLKATA IS OBEDIENT

Kolkata’s intellectualism can sometimes feel invented, but when it loves someone or something, it almost always does so effusively. Watching the documentary If Not for You, one is struck by how deeply the city loves Bob Dylan, its affection bordering on obsession. Dylan posters line the room of musician Susmit Bose, whom filmmakers Jaimin Rajani and Vineet Arora interview. He speaks of how a lover in Kolkata broke up with his girlfriend by leaving her with the lyrics of Dylan’s ‘To Ramona’. Rahul Guha Roy, who plays with alternative rock band Cassini’s Division, says if it weren’t for Dylan, Calcuttans might not play the guitar. Filmmakersongwriter Anjan Dutt even compares him to Rabindranath Tagore.

When asked why Dylan’s music resonated so strongly with all his interviewees, Arora, 45, spoke like a fan. “His body of work is so timeless, it can be applied to any situation.” In 2018, Arora visited Shillong to attend the Bob Dylan Festival, organized by renowned performer Lou Majaw. The Kolkata-bred director was familiar with Dylan mania, so when he finally met Rajani, “a Dylan acolyte”, in March last year, the question came naturally: “Why don’t we do something for Dylan in Calcutta?”