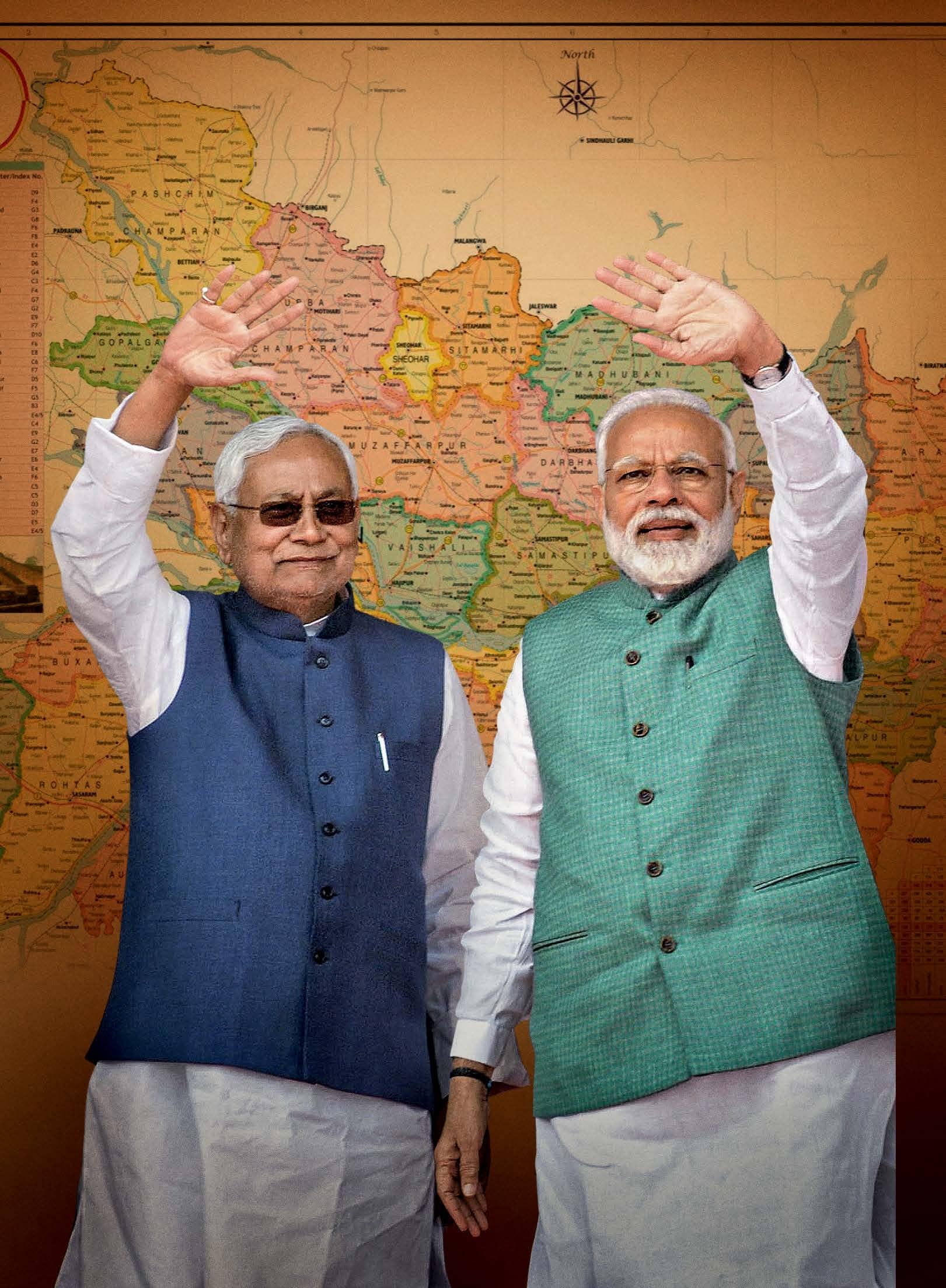 With the force of Prime Minister Narendra Modi’s charisma behind him, Nitish Kumar may yet buck anti-incumbency to win another term as chief minister, finds a Lokniti-CSDS opinion poll

As the campaign for India’s first major election held under the shadow of Covid got underway in Bihar, party candidates initially adopted unconventional methods to reach out to voters. These included e-rallies and marshalling social network sites to unleash a blizzard of political messages. However, as the contesting parties soon realised, nothing is more effective than traditional methods of wooing the electorate, including addressing public meetings in person and ensuring massive turnouts, even if it means ignoring social distancing protocols or wearing masks. Despite warning the nation of the dangers of a second wave of infections, Prime Minister Narendra Modi himself is slated to address a blitzkrieg of 12 poll rallies, beginning October 23, to ensure that the National Democratic Alliance (NDA) continues to rule the state.

The major political parties also chose to follow conventional political wisdom in their choice of alliance partners. Ever since Jharkhand was hived off from Bihar in December 2000, the two powerful regional parties—the Janata Dal (United) or JD(U) and the Rashtriya Janata Dal (RJD)—have never won the assembly election on their own steam. In 2005, for instance, when Nitish Kumar became chief minister for the first time, he had to ally with the BJP under the NDA umbrella to cobble a majority. In the 2009 Lok Sabha and 2010 assembly polls, too, Nitish stuck on with the NDA and swept the elections, while the RJD, which had formed an alliance with Ram Vilas Paswan’s Lok Janshakti Party (LJP), lost badly. But by 2015, Nitish had ditched the NDA and joined hands with the RJD, led by his erstwhile rival Lalu Prasad Yadav. That combination stopped the Modi juggernaut in its tracks, and the JD(U)-RJD rode to power. Two years later, in 2017, Nitish fell out with Lalu and chose to ditch the alliance and form a coalition government with BJP support.

In 2020, with the stakes in the assembly poll enormously high, all the major players in the game have preferred to work with alliances rather than fight on their own. Nitish Kumar, who has ruled the state for almost 15 years now and is vying for his fourth consecutive victory (technically sixth term) as chief minister, decided that sticking with the BJP was the JD(U)’s best bet. The BJP brushed aside concern among its workers over the rising tide of anti-incumbency against Nitish and chose to continue with the alliance. That is also because the BJP is acutely aware that despite its impressive performance in the 2019 Lok Sabha election, it still cannot win the state on its own. Moreover, a victory in Bihar is crucial as the outcome of the polls will be a referendum of sorts on the Modi government’s handling of the Covid crisis. The results will also have a bearing on the BJP’s chances in key states that go to polls in 2021, including West Bengal and Tamil Nadu.

The opposition parties, too, have understood the power of forming key alliances. Rather than go it alone, the RJD chose to stay with the Congress under the mahagathbandhan (MGB) banner, even though the Grand Old Party has a dismal poll record in Bihar. While it got the Left parties on board, it failed to retain a host of minor parties, with the NDA gleefully welcoming two of them: Jitan Ram Manjhi of the Hindustani Awam Morcha (Secular) or HAM(S) and Mukesh Sahni of the Vikassheel Insaan Party (VIP).

The outcome of the election will be no less significant for the MGB constituents either. For the RJD, with Lalu Prasad Yadav serving a jail sentence, the mantle has fallen on his younger son Tejashwi, a cricketer turned politician, to regroup the party into a fighting force and regain its relevance in state politics. For the Congress and its leader Rahul Gandhi, after its dismal showing in the 2019 Lok Sabha election, it is a chance to redeem themselves in the Hindi heartland and show that it is the only national party that can still take on the BJP. 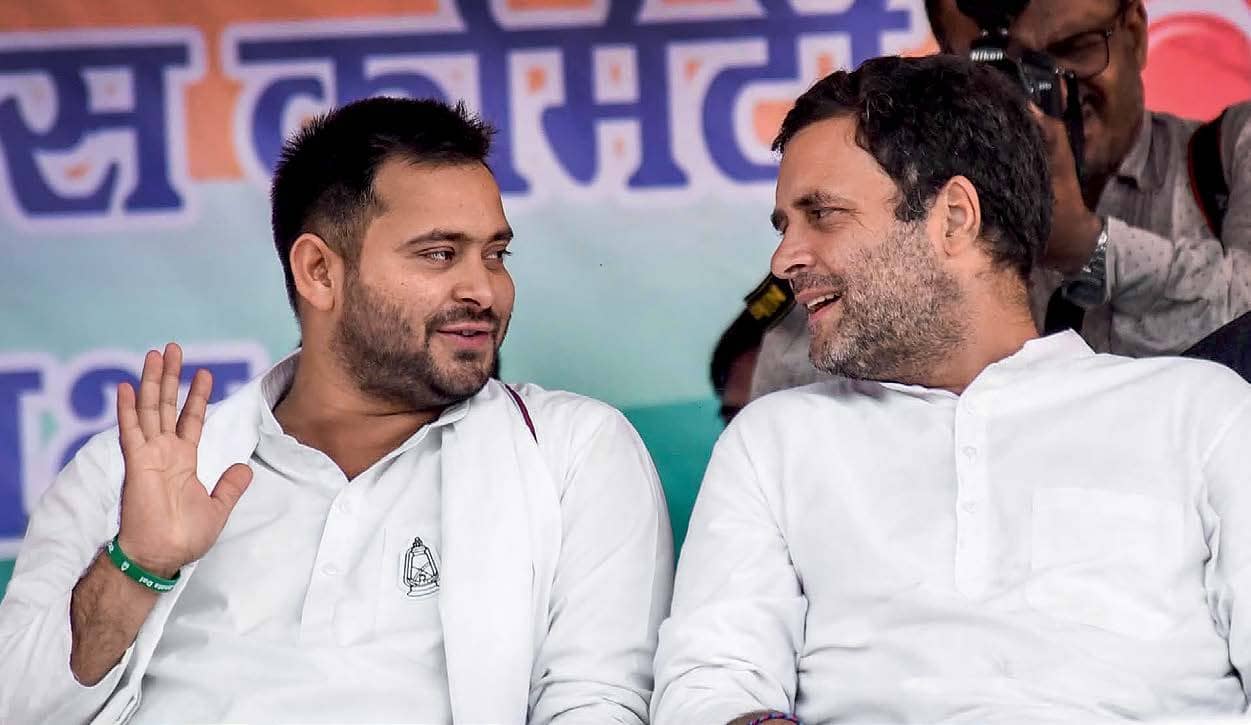 To gauge the mood of the electorate, the Lokniti-CSDS combine conducted an extensive opinion poll between October 10 and 17, for which the India Today Group obtained exclusive rights. The findings show that though the NDA share of votes could fall to 38 per cent as compared to the 2019 Lok Sabha share of 46.3 per cent, it was still an impressive six percentage points ahead of the MGB combine. In terms of seats, though, the NDA would have a clear majority, projected to win 133-143 seats. (Bihar has 243 assembly seats and a party needs 122 seats for a simple majority.) The MGB is projected to win 88-98 seats while the LJP, led by Chirag Paswan, who deserted the NDA a month and a half before the poll and decided to contest on its own, is expected to win only six seats. Lokniti-CSDS does strike a cautionary note, though. Almost 14 per cent of the respondents said they may change their voting choice in the weeks ahead and another 10 per cent chose not to reveal their choice. This means that one out of four voters remains undecided and could play a decisive role in the weeks ahead.

The other major findings of the opinion poll are that while Nitish Kumar still remains the most popular choice for chief minister, with 31 per cent respondents voting in his favour, Tejashwi comes a close second with 27 per cent. What is worrying for the chief minister is that the number satisfied with his performance has dropped from 80 per cent in 2015 to 52 per cent now. Conversely, those dissatisfied with his performance have grown from 18 per cent to 44 per cent in this poll. Forty-three per cent of the respondents also said they were against another term for him as compared to 38 per cent who wanted him to return as CM. These are clear indications of an anti-incumbency mood. What seems to be working to neutralise this rising tide of discontent is that a clear majority of voters are satisfied with the Narendra Modiled NDA government at the Centre. The poll reveals that NDA voters are more likely to base their votes on the Modi government’s performance rather than that of Nitish Kumar. Narendra Modi and the BJP will be crucial to Nitish if he is to be re-elected, our survey reveals.

Much will now depend on the campaigning strategy of the two alliances in the weeks ahead. Bihar will be holding a three-phase assembly election on October 28, November 3 and November 7, with the results to be declared on November 10.

NITISH: DEVELOPMENT IS THE KEY

For the Nitish Kumar-led NDA, the script is clear—as is the strategy. The NDA is pitching “15 years of Nitish rule versus 15 years of the RJD’s” and hopes to run away with the trophy because Nitish’s achievements dwarf those of the Lalu-Rabri government between 1990 and 2005.