Come and See The Blood In The Streets 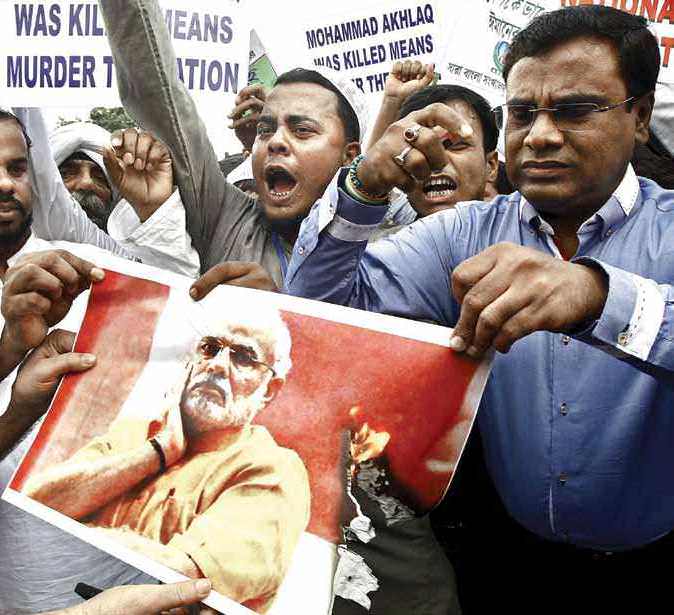 Incidents of violence targetting the minorities have become routine in the last 16 months. Prime Minister Modis government has done little to shun the belief that the culprits dont enjoy its patronage.

This year, October, which is a month of celebration and festivities, has been unusually violent. Days of calm and peace have been few and far between. Hatred and intolerance seem to have taken over the festive mood. So much so that it forced President Pranab Mukherjee to invoke Goddess Durga against those who have been working consciously to undermine the Constitution by openly targetting the Muslims and others who don’t conform with their worldview. He was not specific but it was certainly a reference to the radical Hindutva outfits which seek to change the country’s image from a secular republic to a Hindu Rashtra.

The lynching of Akhlaq Ahmad in Dadri came as a shock even to those who have been watching this show of bloodlust and hatred from the margins since the BJP-led NDA government took oath under the Constitution in May 2014.

September 28 was just another normal day in Bishara village of Dadri, situated 45 kilometres from national capital New Delhi until about 10 pm when an unusual announcement from the local temple set off a violent mob. The priest, on the insistence of some people including relatives of Suresh Rana, a local leader belonging to the BJP, announced that the Muslim family of Ahmad had slaughtered a cow. Soon, the Hindu villagers, which included some of Ahmad’s friends, attacked his house. The family pleaded for mercy and tried to explain to those they had been living with for so many years that the meat in the house was not beef. They had barely finished celebrating Eid ul Adha, a festival which mostly goes on for three days during which Muslims mostly sacrifice goats, sheep or buffaloes. However, the bloodthirsty mob had come with a definite plan. The 52-year-old Ahmad, who worked as a daily wager, and his son, 22-year old Danish, were dragged out of their house by the 100-strong mob and brutally beaten with bricks. While Ahmad succumbed to injuries, Danish was critical and recovering in the Army hospital. Ahmad’s other son, Sartaj, serves in the Indian Air Force. Reports suggest that there was a campaign going on for about a week on different platforms including Whatsapp on the disappearance of a calf in the region.

As a police officer from UP put it, “Merely rumours are leading to killings. You suddenly hear that a stone was thrown and that it hit someone, but when you investigate you are not able to make out who threw the stone and who was hit. It all turns out to be mere rumour.”