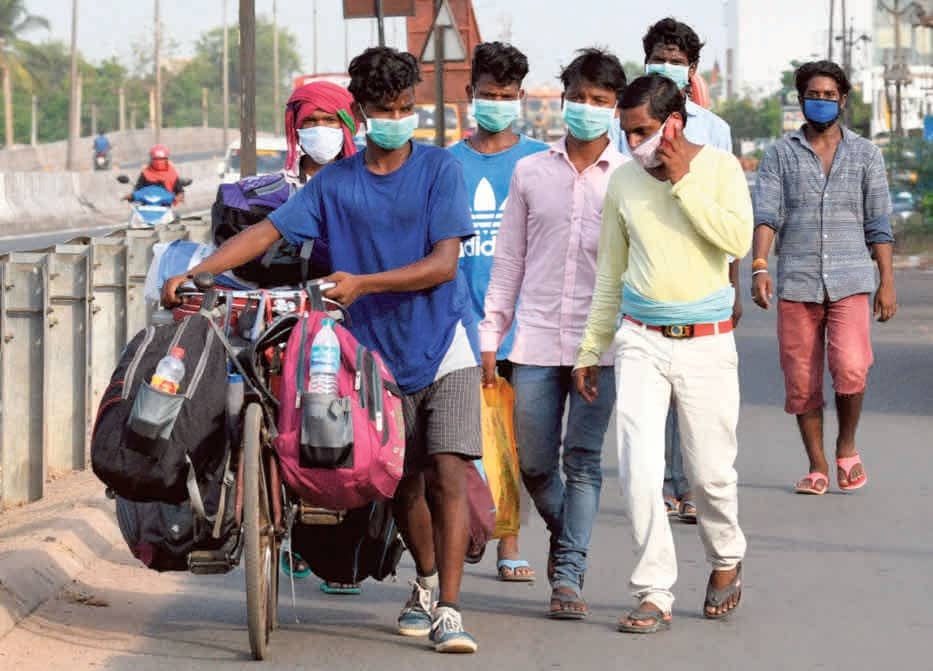 As the COVID-19-induced lockdown cuts the ground beneath their feet in Tamil Nadu, thousands of migrant workers are trudging along the highway to the relative safety of their upcountry homes.

A GROUP OF 13 MIGRANT WORKERS FROM Bihar, who had just begun their journey back home on foot from Valsarawakkam in Chennai on May 19, had chalked out a plan. “Our target is to reach TJS Engineering College in Gummidipoondi [a government-run camp]. People from our village are there. They left yesterday. We will join them and go to Patna from there,” one of them, Rajesh, said.

Why were they leaving Chennai just when industries were reopening after the lockdown? “We are running out of money because we haven’t worked for about two months,” said one of them. His friend said they were not sure of getting jobs at the same place. “We are also scared of corona,” said another. “It is better to go home during times like these.”

Just as they crossed the Anna Nagar Cooum bridge on the Inner Ring Road, a few volunteers on the road gave them masks and caps. A little way ahead, a mini truck driver offered them a lift to Madhavaram, a northern suburb closer to Gummidipoondi. “He demanded only Rs.500 to take all of us to our destination,” said one of them. With a lot of luck and with the help of another truck driver, they reached Gummidipoondi by evening.

While there has been no news of their onward journey, the 13 were confident that they will somehow manage to reach their destination. Their optimism was not misplaced: of all the migrant labourers who have been on the road to Andhra Pradesh and beyond, this group perhaps had taken the shortest time to reach Gummidipoondi from the city—50 km in about eight hours—while other groups, some consisting of women and children, obviously took much longer.

On the same day at around 3-30 p.m., just off the Nallur toll plaza on National Highway 5, 21 km from Chennai, the police from Chennai’s neighbouring district, Tiruvallur, stopped a group of 30 labourers walking towards their villages near Lucknow, Uttar Pradesh. “You need to get medically checked and then you can proceed with the papers,” a constable told them before sending them back to Chennai even as they argued with him to let them cross the newly strengthened “checkpost”—set up primarily to prevent migrant labourers from crossing over to Tiruvallur district.

‘NOT IN MY BACKYARD’ SYNDROME

Apparently, every district administration seemed to be washing its hands of the migrant problem. On May 14 and 15, the administration of Andhra Pradesh’s Nellore district, adjoining Tiruvallur, transported labourers who had walked almost 50-70 km into that State back to the Tamil Nadu border, at Tada. This correspondent is aware of multiple instances in which labourers were transported—in collaboration with volunteers—by trucks into Chennai metropolitan limits.

Obviously, Andhra Pradesh did not want to take any responsibility for those walking across the length of the State to Odisha and Jharkhand even though its Chief Secretary pulled a public relations exercise by arranging a vehicle for some migrants on foot.

Andhra Pradesh was merely following the orders of the Union Home Ministry, which initially asked States to ensure that migrant labourers did not walk home. On May 18, however, the Ministry, knowing that the number of migrants on the road were too large, modified its rule so as to allow them to walk. The order (D.O. No. 40-10/ 2020-DM-I (A)) from Ajay Bhalla, Home Secretary, on May 18 states: “For routes where the migrants are known to be already travelling on foot, arrangement could be made by the States, which are en route, for designated rest places, taking into account requirement of sanitation, food and health.”

But these instructions had not percolated down and the group of migrants from Uttar Pradesh was forced to retrace their steps and look for the marriage hall where the police said certificates would be issued after a checkup.

Though distraught, they said this was nothing new to them, having been pushed around by the police quite a few times since they began their journey on May 18.