FRONTLINE|May 08, 2020
We're offering this story for free to read so that you can stay updated on the COVID-19 outbreak

In India, decisions on strategies to contain COVID-19 are being made on the basis of unreliable data, but two things are clear: the number of infections is still on the rise and once the lockdown is lifted there will be a resurgence of cases. The government needs to come up with a calibrated approach to manage both in the post-lockdown period.

The two phases of lockdown have certainly achieved their objective of slowing down the transmission of the infection in the population. This, as mentioned above, is also evident from the fact that the rate of increase in the number of infections has been coming down since the lockdown began. In the second phase, in fact, it has come down from a 10-15 per cent rate of increase to under 10 per cent, a little flattening of the curve. That this should happen is intuitively obvious when physical distancing between people and person-to-person contacts are minimised; the chance of one individual passing the infection to another has been greatly reduced. 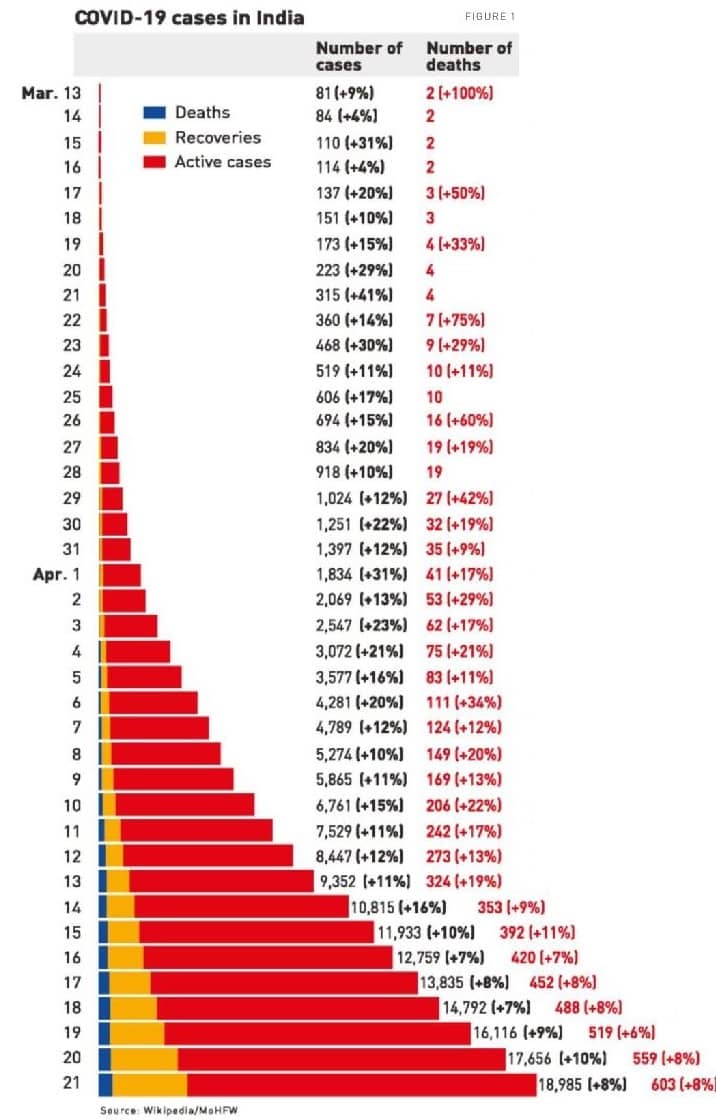 But the growth factor (the ratio of the changes in the number of confirmed cases between two consecutive days), that is, the slope of the curve, is still consistently above 1, which means that the curve of infections is still exponentially increasing, though a little slower than before the lockdown, and the country is still far from peaking and then declining. Only when the slope stays around 1 for some days can one say that the curve has hit the inflection point from where the slope will become less than 1; the peak number can be expected to be around twice the number of infections at the inflection point.

Another way of looking at the progression of the epidemic in India is the so-called doubling time: the number of days it takes for the number of infections on a given day to double itself. It is this metric that the government is using to show the efficacy of the lockdown. In its press update of April 20, the Health Ministry said: “The doubling rate of COVID-19 cases calculated using growth over the past seven days indicates that India’s doubling rate for the week before lockdown [March 18-24] was 3.4 and has improved to 7.5 as on 19th April, 2020 (for the last seven days).”

This is not surprising because, as pointed out above, if you cut off nearly all possibilities of transmission of infection by totally switching off social/societal interactions, this will naturally happen.

At the State level, however, there is a wide dispersion in doubling times as is evident from the Ministry’s April 19 data (see table). The Chennai-based National Institute of Epidemiology has on its website presented a nice way of looking at this with data for eight representative States: Andhra Pradesh, Delhi, Kerala, Maharashtra, Rajasthan, Tamil Nadu and Telangana (Figure 3; unfortunately, this graph has not been updated with latest data, and the plots are only up to a few days before April 19).