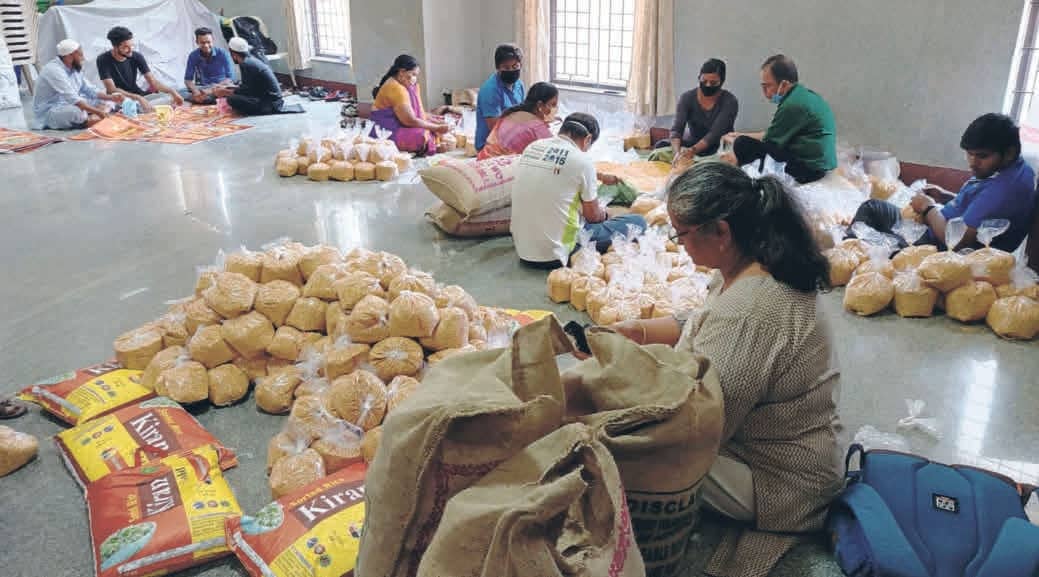 While non-governmental organisations step up to meet the food needs of migrant workers, the lack of adequate testing and the inordinate focus on Bengaluru remain worrisome.

ON APRIL 12, AROUND 80 VOLUNTEERS gathered at St. Joseph’s College in central Bengaluru to support the non-governmental organisation (NGO) Hasirudala’s initiative to provide dry rations to waste pickers and other vulnerable communities in Bengaluru and other parts of Karnataka.

They got busy packing two kinds of kits. The larger kit contained 25 kilograms of rice, 5 kg of dal, a litre of oil, 1 kg each of sugar and salt, 500 gm each of chilli powder and tea powder and two bars of soap. The smaller kit contained 10 kg of rice and 2 kg of dal and the same quantities of the other items.

Even before Prime Minister Narendra Modi announced the 21-day lockdown on March 24, Hasirudala began to galvanise its network to provide rations to waste pickers.

“Initially we worked from the Agricultural Produce Market Committee (APMC) yard in Yeshwantpur before moving to St. Joseph’s College on April 3. Commodities bought wholesale are packed and distributed from here. Now, we are also reaching out directly to rice mills as the APMCs do not have sufficient rice,” said Lakshmi Karunakaran, programme director at Hasirudala.

Leading an alliance of NGOs called With Bengaluru, Hasirudala utilised donations from both individuals and corporates to sustain this initiative, which extended beyond the network of waste pickers identified by it.

As of April 12, the last day of the initiative, it had distributed nearly 20,000 large and small ration kits in Bengaluru and a few other towns in Karnataka, thus taking care of the food requirements of 75,000 to 80,000 persons.

One of the main challenges was coordinating with other relief organisations so that there was no overlap of targeted beneficiaries. Additionally, the aim of With Bengaluru was to reach out to large numbers of the working population who were below poverty line and not beneficiaries of the public distribution system (PDS). “Ideally, all this should not be done by private citizens.

We are just filling the gap before the government steps in,” said Karthik Natarajan, who works with Hasirudala.

Shahin Shasa, who coordinates relief activity for another organisation, said: “We have received 320 requests for food since the lockdown began, meaning roughly around 6,000 people, as each request represents a cluster of people. Since the lockdown began, we have been able to partially close only around 150 requests. It is beyond our ability to handle this scale of demand as civil society volunteers.”

NGOs had to step in to provide relief because of the sudden announcement of the lockdown from March 25 that left lakhs of vulnerable sections of the population stranded.

As the State government did not have the field intelligence required to gauge and manage the colossal demand for essential commodities, the economically weaker sections were left in the lurch.

The Karnataka government initially announced that it would provide dry rations to all households whether they had ration cards or not, but in practice only rice and wheat are being provided to BPL beneficiaries.