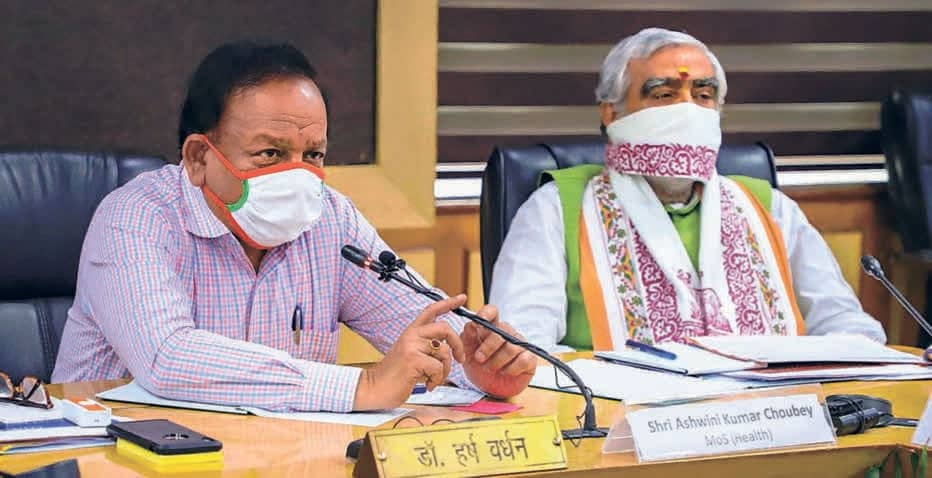 Faced with the failure of its lockdown-centric strategy, the Centre blames the States and the people for the rising graph of COVID-19 infection in the country. Grossly inadequate Union health budgets and the long-term failure to build a robust public health infrastructure have compounded the crisis.

THE GROWTH OF COVID-19 INFECTIONS IN India (number of confirmed cases as per government data, to be precise) is yet to “fall off” the exponential growth phase. This can be seen graphically if the timeline of number of cases is plotted with the number of cases on a logarithmic scale graph (where, unlike on a linear scale graph, unit intervals typically differ by a factor of 10). The graph (Figure 1) will be a straight line if the infection spread is continuing to increase exponentially. While the curve may seem to depart from the straight line, recent data suggest that its trend is closer to a straight line than curving downwards. A proper statistical regression analysis to the data will show that the best curve that fits the data in this graph is a straight line.

Another way of looking at this trend, as discussed in an earlier article (“Lockdown and after”, Frontline, May 8), is the “growth factor”, the ratio of the changes in the number of confirmed cases between two consecutive days. If one looks at the data for the past one week (Figure 2) from May 1, this growth factor, though close to 1, has been mostly above 1. This implies that although the growth rate is close to dropping below the exponential phase, it is still very much in that phase even as the country is into its third consecutive lockdown.

While at the individual level some States have done well and succeeded in veering off the exponential phase, there are, as can be seen from Figure 3 (where both the increase in the number of cases and the total count are plotted on a log scale), still a significant number of States that are in the exponential phase (closer to the reference straight line), and the growth rates there are a source of concern. These States are Maharashtra, Gujarat, Delhi, Tamil Nadu, Punjab and West Bengal, with the last three experiencing a sudden spurt in cases. The trend at the all-India level basically reflects these worrying State level trends. Comparison of these States with States such as Kerala and Telangana is particularly telling. Of course, one must add here that one is taking the data at face value, which may not be the true picture because of State-level disparities in testing rates.